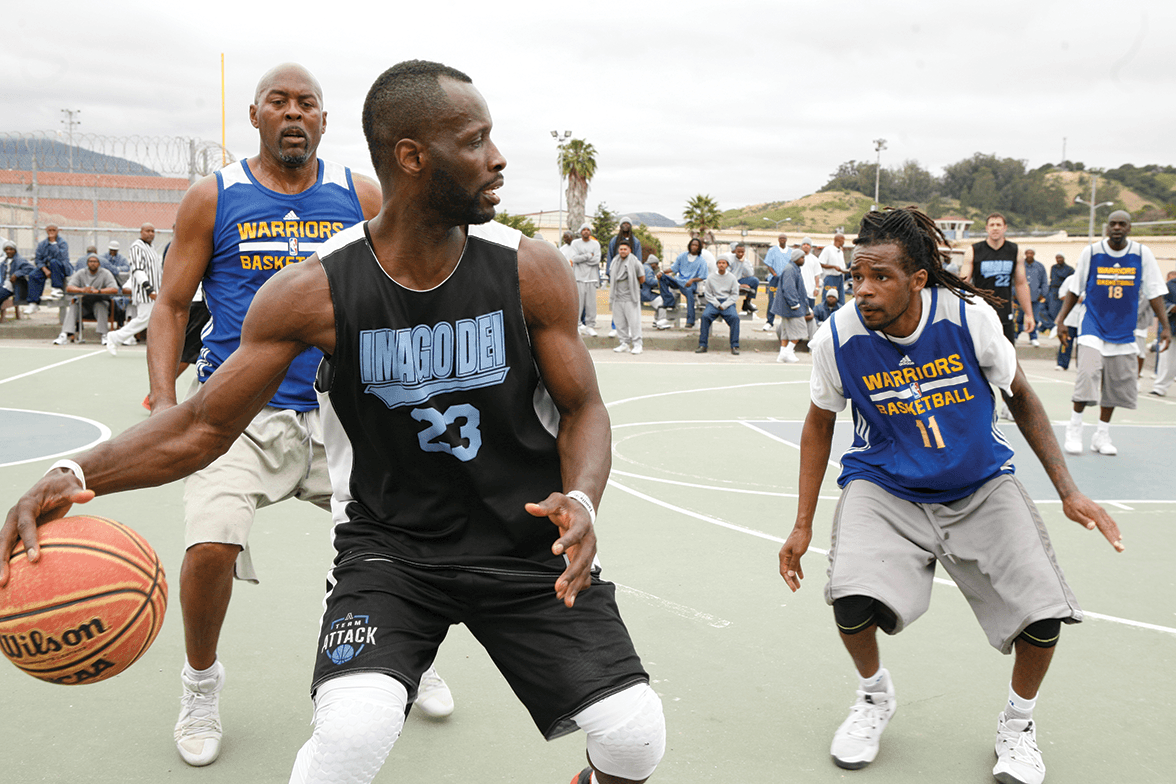 Despite 27, turnovers, two St. Mary’s College Alumni combined for 59 points to lead the visiting Imago Dei basketball team to a 90-84 victory over the San Quentin Warriors.

“It’s bigger than basketball,” Warriors Coach Rafael Cuevas said. “I appreciate the level of competition you guys brought today. I love the way you pour your heart out in the game and off the court too.”

Teohn Conner, who went to St. Mary’s and played semi-pro for Bay Areas teams like the SF Rumbles and Pittsburg Pit-bulls, completed a triple double with 36 points, 16 rebounds and 11 turnovers. He also had 6 steals and 4 assists.

“You guys come in here and show us love,” Asey said then handed out Day of Peace wrist bands made of rubber with slogan like, “Believer of peace.”

Everyone put their hands in the middle and yelled, “family,” after the count of three.

After the opening tip, Conner played like a man possessed, partly due to a 2017 controversial call that cost Imago a chance to win their season finale. The time keeper claimed that time had run out before a ref made the call that sent Conner to the line to shoot free throws with Imago down one point.

“The biggest thing for me is to be competitive but that call is always in the back of my head,” Conner said. “I’m playing with a chip on my shoulder – it wasn’t right.”

Imago started out hot and quickly gained a 8-2 lead.

“It’s not about your height in inches, it’s about the height of your heart,” Cook said.

Imago’s Steve “Big Red” Sanderson, who weighs 305 pounds, said “Walt boxes out the best on their team. He has that low center of gravity. I can’t move him.”

By the end of the first quarter, the Warriors lead 21-16 largely due to Imago turnovers.

Towards the end of the second quarter, Collins tied the score at 40 with an And-one. But at half time, the Warriors led 44-42.

Early in the second half, Imago’s Tony Thomas shocked the crowd when he dribbled out of a double team by bouncing the ball between Harry “ATL” Smith’s legs, retrieved the ball and shot a floater that missed but earned him a trip to the free-throw line. He finished with 9 points and 5 assists.

The game went back and forth with McIntosh hot from the field. He led the Warriors with 25 points.

The game broke open for Imago Dei in the fourth quarter.

The Warriors tied the score at 69-69 off a three by Cook but didn’t score again, due to turnovers, for about five minutes.

Meanwhile, Imago poured on buckets. Collins took the lead with a layup. Conner followed with an And-one.

“The Warriors are coming, but don’t panic,” Conner said in the huddle.

When play resumed, Smith stole the ball and went coast-to-coast to break the Warriors scoring drought, which made the score 80-71.

With 1:08 on the clock, Cook went to the rack and scored on two defenders to bring the Warriors within 8 at 88-80.

Time ran out before the Warriors could complete a comeback.

“We played good dee,” Collins said. “They had as many turnovers as we did so that’s helpful.”

Conner noted that the Warriors, who play as many as 15 players in one game, need time to gel.

“They’re not used to playing with each other; they’re trying to figure out how to play together,” Conner said. “We’ve been playing together for a long time so when we’re down 10, we know what to do.”