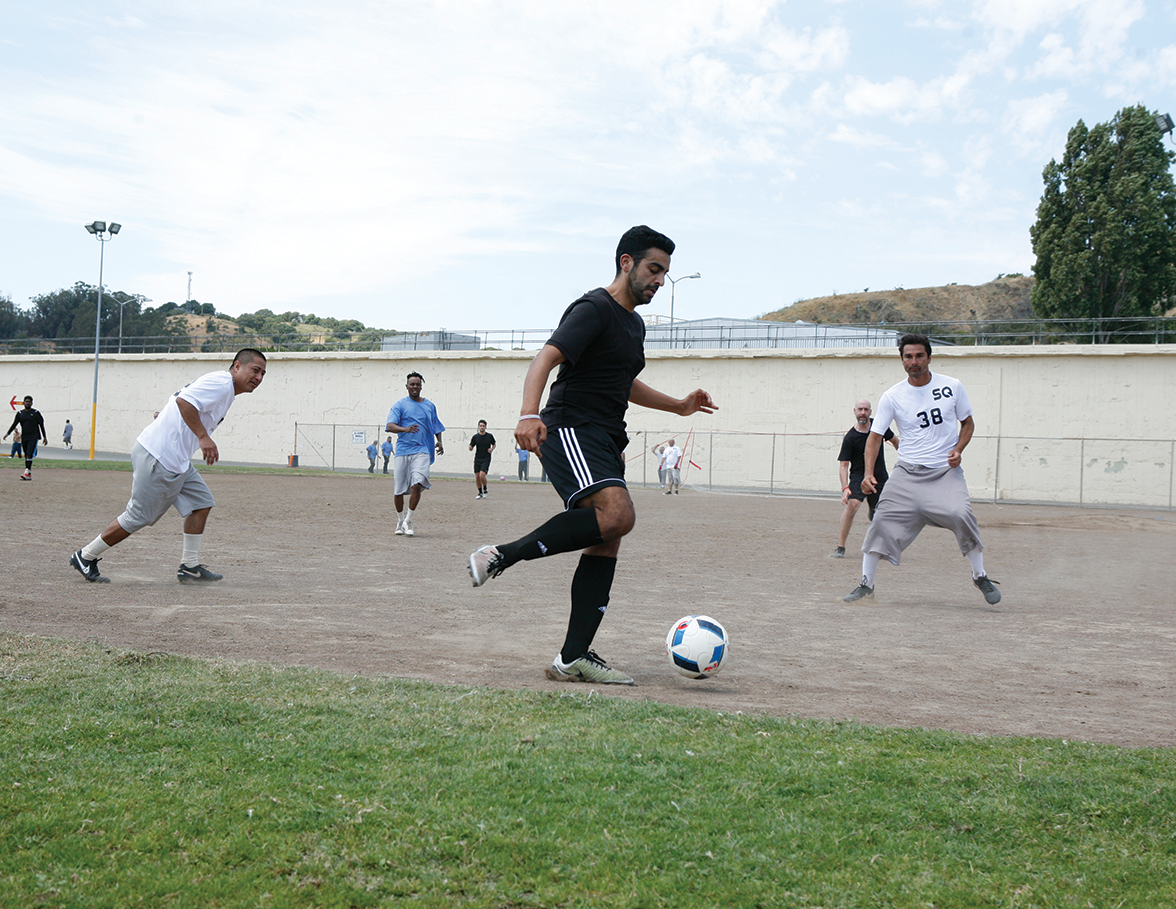 Dressed in brand-new San Quentin soccer jerseys, the A-Team came back from a two-goal deficit against the visiting Outsiders, but lost in penalty kicks, 7-4.
“This is another part of the program developing,” sponsor Andrew Crawford said about the new garb. “Now the San Quentin team looks like a real soccer team.”
During the July 21 game, the Outsiders jumped ahead with a goal scored by Sugandan Barthy and two by San Quentin resident Don Spence, who played against the home team.
“Spence scored two screamers,” Crawford noted. The A-Team was down 3-1 at halftime.
“I came out to get some exercise but there was no room on the home team so the (outside) team gave me an opportunity to play and we destroyed them,” Spence said.
Spence replaced Dario Abramskiehn, who has scored many goals on the prison yard, but couldn’t play due to injury. He still came into the prison to provide moral support.
In the second half, the A-Team scored off the foot of new SQ resident Rodrigo Guarderas, making the score 3-2.
Guarderas said he grew up playing soccer, including at Birmingham High School in San Fernando Valley and for the Granada United Soccer Club.
“I’m always going to love soccer,” Guarderas said.
Outsiders Brian Nicolas responded.
While the offense moved the ball down the field, Nicolas was tackled by a defender, but barreled through and placed the ball in an empty space in the left corner of the net for a goal.
The A-Team rallied back. In the 60th minute, Tare “Cancun” Beltranchuc’s goal made the score 4-3.
With three minutes left in the game, Guarderas tied the score at 4-4 with his second goal.
Time ran out with the score 4-4.
The Outsiders dominated the penalty kicks, making three straight off the feet of Reid Rosenberg, Rohit Ramchandani and Jared Bernstein.
Eusebio Gonzalez, another Quentin resident borrowed by the outside team, blocked all three of the A-Team’s kicks.
Beltranchuc smiled after the game as both teams huddled up together in a large circle.
“When you guys come in here, you make us feel seen and relevant,” Beltranchuc said. “Thank you; it rejuvenates us every time.”