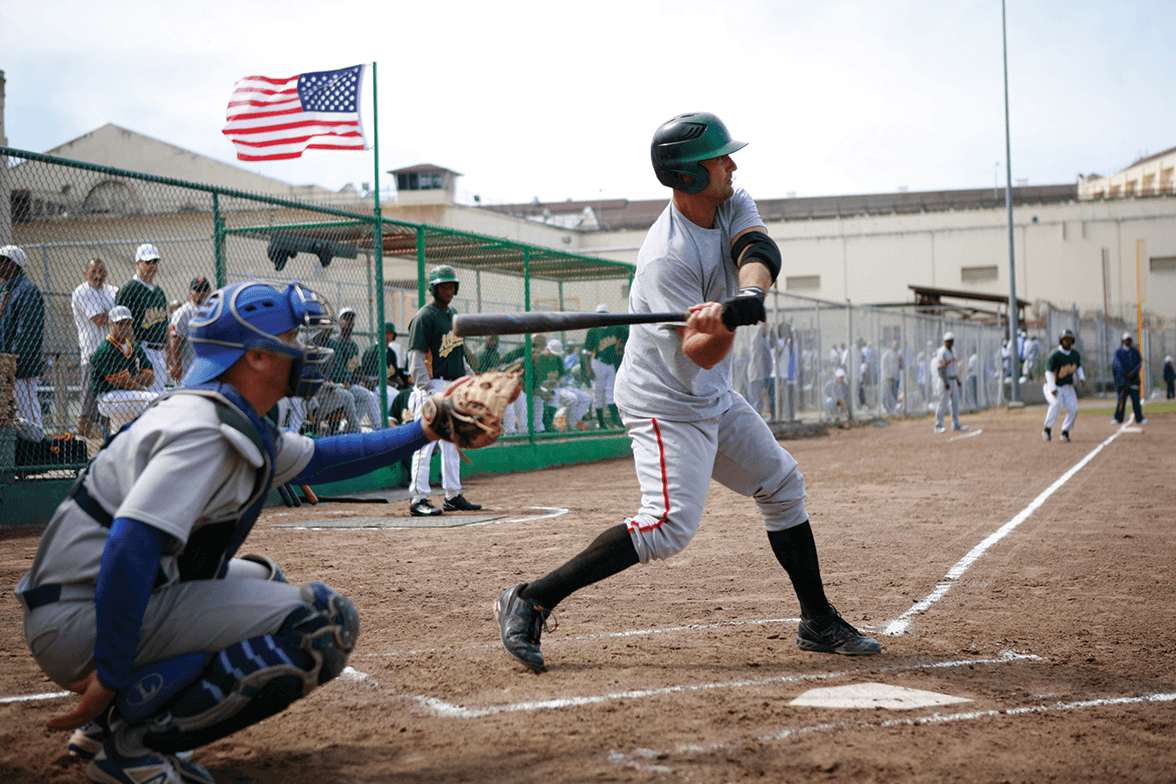 Trevor Bird at batting against Dodgertown

In the first game, Dodgertown fought off a ninth-inning rally to defeat the A’s 6-5. The A’s regrouped in the afternoon game with a stronger` performance for the 8-3 victory, to split the doubleheader with their friendly rivals.

“Man, I always root for all of our [San Quentin] teams, but today I had to go with the Dodger blue; that’s my team,” said Brad “Bam” Shells, one of the 20 or more spectators. “They travel all this way on their own time and dime. That shows how incredible this program is.”

Dodgertown scored three runs in the eighth inning of game one, for a commanding 6-2 lead. The A’s defense dropped balls and overthrew bases, allowing Dodgertown to extend the inning. With the bases loaded and one out, the A’s buckled down and turned a double play to stop the rout.

The Dodgertown team played in Cuba earlier this year, sharpening their skills and playing under harsh conditions, but finding love through the game.

More than a third of millennials say that if a man compliments a woman’s looks it is harassment, according to a recent survey by The Economist/YouGov reports The New York Times 1-17-18.

“Playing in Cuba, you can see how baseball helps transcend any geopolitics and borders,” Steve Marshall said. “Like coming to San Quentin, you feel the seriousness, then you see the smiles and that creates relate-ability. That’s what sports is supposed to do, to bring the best out of us and have fun.”

Dodgertown’s Paul Galletti and A’s Chris Marshall did just that; they had fun as the two heckled each other from their dugouts.

“It’s sad to see the same faces,” Galletti said. “But some guys are paroling and having hope, so that’s good.”

The Dodgertown team is a part of the Men’s Senior Baseball League in Southern California.

In the bottom of the ninth, the A’s showcased their never-give-up attitude. A’s veteran Chris Marshall battled at the plate against Dodgertown relief pitcher Brian “Red” Dambrosi to work a full count. Marshall foul-tipped around a dozen pitches. Leigh Olden Jr. ripped a triple off the infield gate, scoring Marshall.

The next batter walked, as veteran Branden Terrell stepped to the plate with his bat held high. Terrell smashed a line drive to the centerfield gap scoring both runners. Terrell tried to round second base, but was thrown out.

Down 6-5 with two outs, Trevor Byrd swung and slapped the ball straight into the pitcher’s glove to end game one.

“I been down 14 years and I spent that whole time trying to get to San Quentin for the programs,” first-year player Olden Jr. said.. “With this opportunity I get to play a sport I’m passionate about. I was just thinking; I haven’t touched a bat in years.”

Olden Jr. said he appreciates and looks forward to playing teams from the outside community every week.

“This program helps you deal with adversity,”  he said. “You learn to deal with different people and attitudes. Even when things are not going well, we are still supportive of each other.”

“It was a good battle from top to finish,” A’s volunteer coach Mike Kremer added.