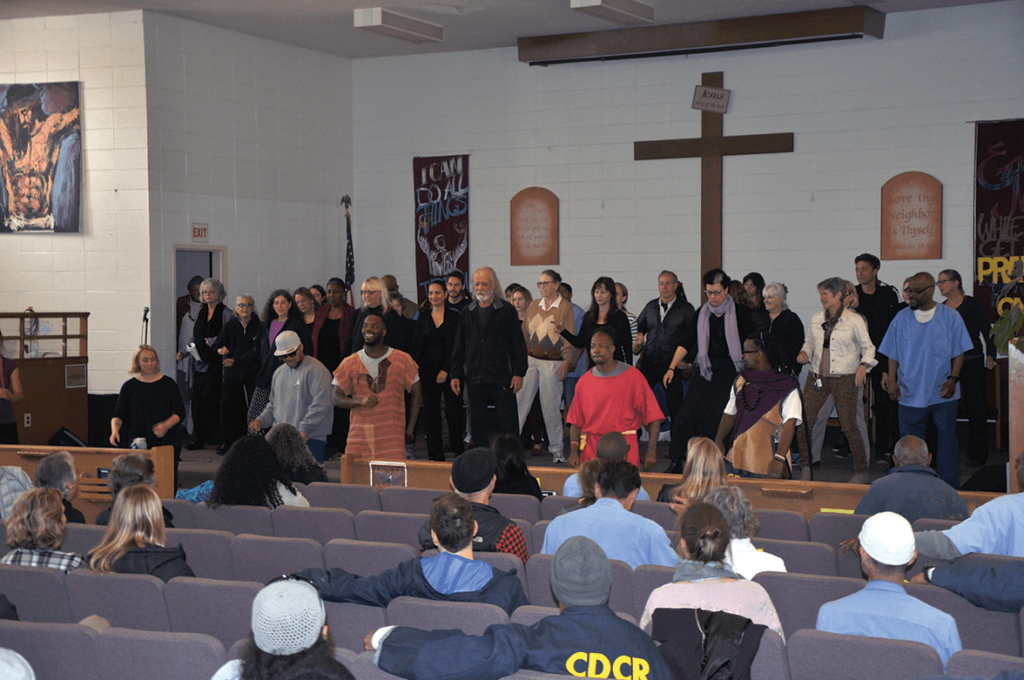 Audience members on stage learning to dance the Electric Swag

Drama therapy was in full display on May 18 as a nine-day quarantine ended at San Quentin for inmate performers in the Shakespeare play King Lear — a week later, the prison was on normal program for Comedy of Errors.

“First, I was in shock,” said Jason Robinson about West Block getting off the quarantine. “But, Steve Emrick (Community Partnership Manager) said, ‘The show must go on.’ I was humbled that the administration made it happen, so outside people could see this play.”

North Block inmate Nythell “Nate” Collins, who played Edgar, Gloucester’s son, added, “There’s fog lines and lockdowns. There’s always something that we have to deal with, but even with all that, we worked on our own — in our cells and on the yard.”

The quarantine did not affect North Block.

“Every time I performed Shakespeare, a [new] piece of me comes out,” said Philippe “Kells” Kelly, who played Earl of Kent. “It’s kind of dope that we can do Shakespeare in an environment like this.”

In the Protestant Chapel venue, Lesley Currier gave an audience of about 65 San Francisco Bay Area community members and several dozen inmates an overview of King Lear — it’s a story about truth and betrayal as well as appeasing the powers-to-be.

Director Suraya Keating added, “King Lear is about how a king reacts when his daughter does not act like he wants her to.”

“In the end, Lear loses everything — his power, his riches, his sanity — and ultimately recognizes and repents for his mistake. However, in losing everything, he gains back the one thing that he had denied — the truth,” the King Lear program reads.

“What struck me about this play is the parallel with our current president,” said audience member Lisa. “He (President Donald J. Trump) likes hearing a lot of praise about himself. There’s timelessness in King Lear’s story.”

LeMar “Maverick” Harrison, who played the Fool, said, “From the Fool’s perspective, it made me look at who do we surround ourselves with? Many times people won’t tell you the truth or motivate you—with Lear, it was the Fool who told him the truth, which made me appreciate the few friends I have.” 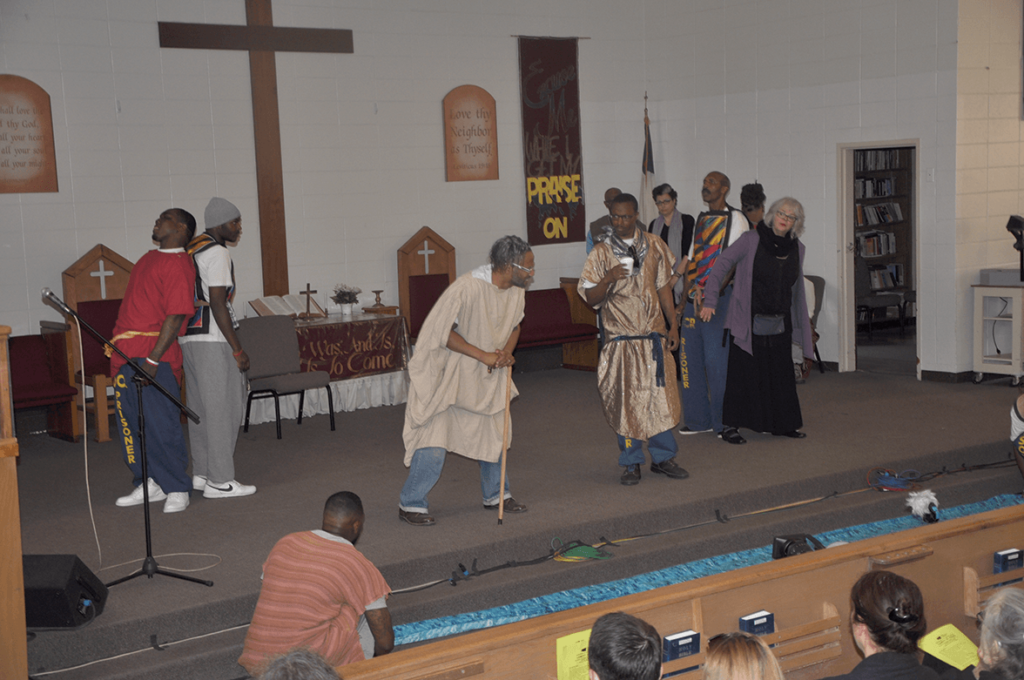 Comedy of Errors, held in the same venue as King Lear, “is a furiously funny, fabulously confusing play of what happens when mistuned identity and misunderstandings abound, and the ‘truth’ becomes no clearer than a summer morning in San Francisco,” the program reads.

At various points, Comedy of Errors actors weaved through the audience chasing each other, bringing laughter, as people twisted in their seats to let the actors get by.

At the play’s close, the actors danced on stage, bringing the audience of more than 100 Bay Area community members and inmates to their feet.

“We use Shakespeare to support ourselves to be the best human beings we can be,” Keating told the audience.

The actors talked about how Shakespeare in San Quentin helps change criminal thinking.

“I grew up without anyone believing in me,” Andrew “Drew” Wadsworth said. “When I first got my script, I was scared to death. I used to tell myself that I have a bad memory. I can’t remember long lines. But Suraya believed in me and helped me bust down that myth.”

Maurice “Reese” Reed said, “Sometimes I get stuck in my ways, but seeing the guys doing Shakespearean plays helps me realize that I can do things I thought I couldn’t.” 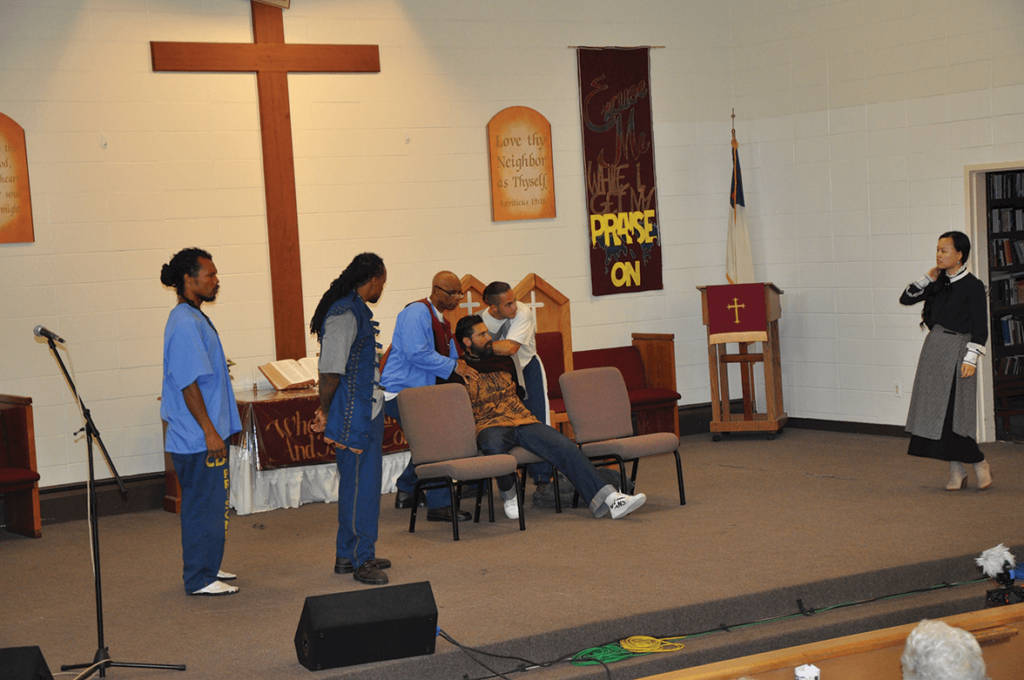 The actors in King Lear commented about surprises gained from theater in prison.

“The biggest surprise for me is that I didn’t realize the pain that I’d caused my family,” said Chris R. Marshall, Sr. who played King Lear. “I’m the only person in my family arrested. It surprised me how badly I felt about that.”

Eddie DeWeaver, who played the Duke of Albany, husband to Goneril, said he was surprised by the double standard imposed on the women.

“But, it was good to see an ambitious woman wanting to take over the whole kingdom,” said DeWeaver — followed by loud applause from the audience.

Robert “Belize” Villafranco, who played a knight and messenger, said the first time he was given a script, he was afraid. His role was of a woman and he had to wear a dress.

Villafranco said that the teasing, dress-pulling inmates made him think about what women go through in society and how the role taught him about empathy from having to play a woman.

The audience was curious as to how inmates got involved in Shakespeare.

“I got tricked four years ago,” Marshall said. “I grew up as an athlete, and I thought performing Shakespeare was something soft. But, one of the guys asked me if I was afraid to do it. I said, ‘I ain’t afraid of nothing.’ Now this is my fifth play.”

“I’ve been doing this for 10 years now,” Collins said. He added, jokingly, “It’s kind of cool for a thug like me to do Shakespeare.”

The Comedy of Errors Audience Questions

“I feel that the way you’re brought into Shakespeare, it was easy to understand,” said Ellen. “What themes does this play stir up?” 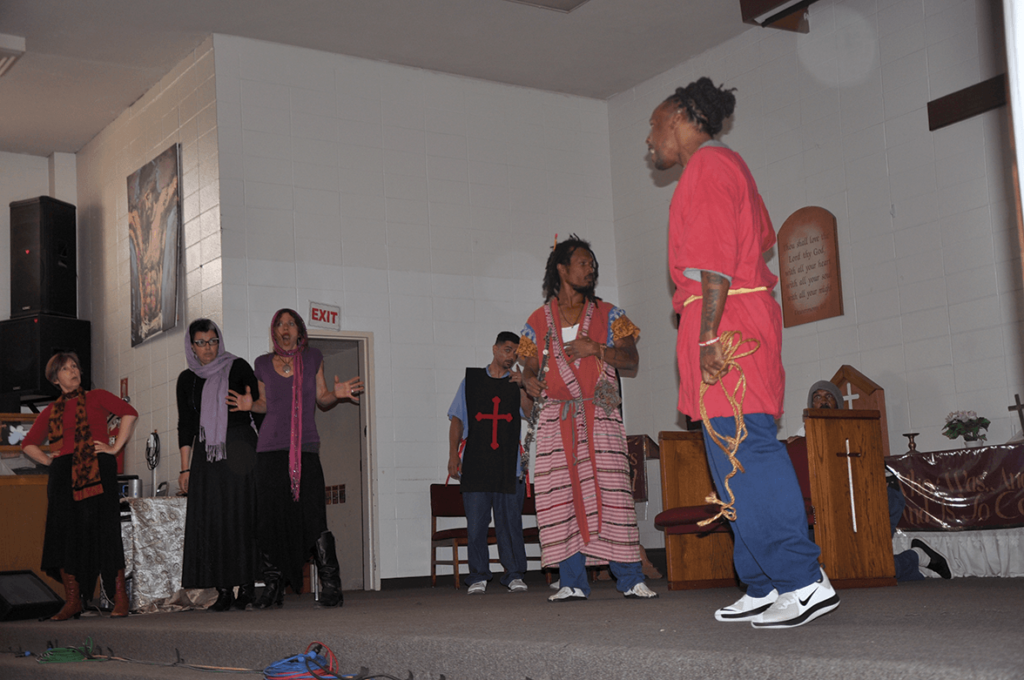 “There’s a difference between truth and facts,” said Antwan “Banks” Williams. “In life, when we see something a certain way, it could be wrong. It’s because we base our beliefs on feelings not facts.” Referring to Comedy of Errors, Williams added, “Everybody was telling the truth. Everyone was being honest, but there was a lack of communication. That led to major mishaps — communication is important. This play speaks to people, telling them that they should talk and communicate with each other.”

Audience members, who have never been in a prison before, were asked what they should go away with.

“Don’t believe the outside media. Take a tour inside San Quentin.”

“We are not defined by our crimes.”

What life lessons do inmates take from Comedy of Errors?

“Laughter is the best medicine”—Fantom Lightyear

“Like in life, in our art, we are stronger together, than apart”—Richie Morris

Recognizing the benefits of exposure to drama, the William James Association has contracted Janessa Johnsrude to bring a theater program to Pelican Bay prison. She is now in her second year of the program. On May 22, about 40 inmates were scheduled to perform Paper Rose — loosely based on Hamlet and Character Interview, created from the profiles of incarcerated people and free people.

Marin Shakespeare Company began its program in San Quentin in 2003. The program now has expanded to 11 prisons. Videos are hosted on www.marinshakespeare.org.