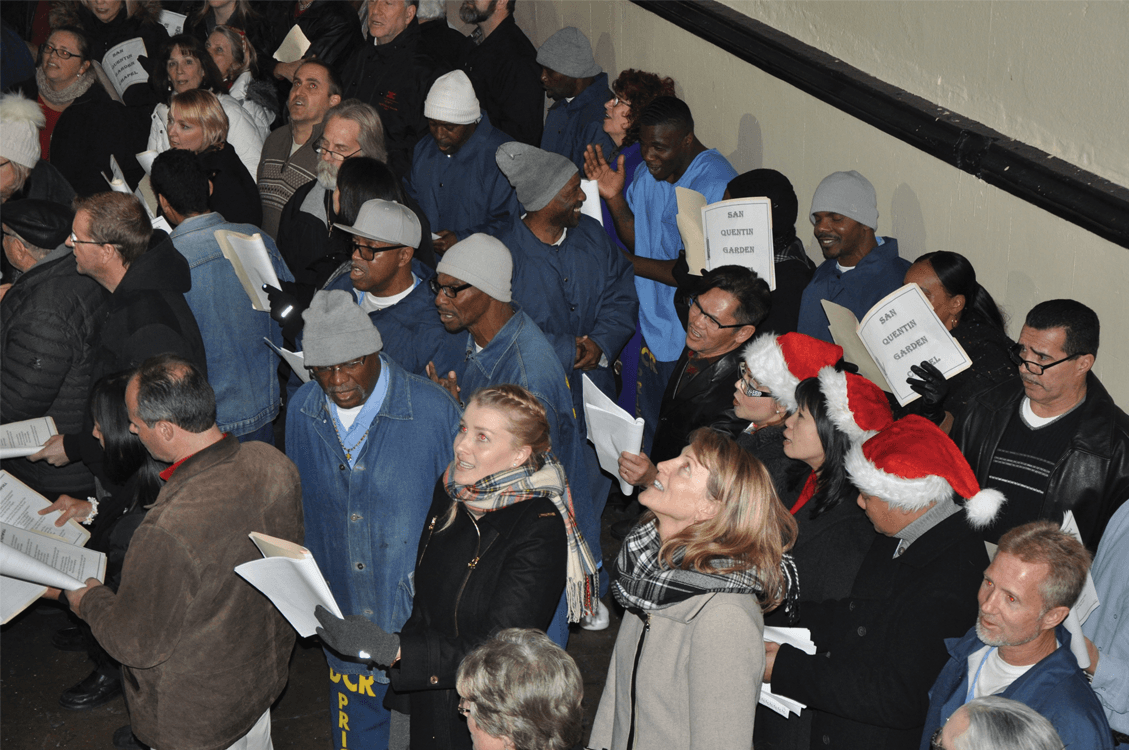 A few weeks before Christmas, prison volunteers, the Protestant Church choir and other inmates parade from building to building sharing the joy of the holidays.

“We’re so happy to get into San Quentin. Some of our neighbors think we’re crazy because we tell them we love coming into the prison,” said Kim Lam, a Christian volunteer from Open Arms Church “I love to volunteer because I get to see men’s lives transformed by the love of God.”

“We love sharing the love of Christ with the men in the buildings,” said inmate Trent Capell “It’s an amazing feeling just being able to share the joy of Christmas and its real meaning with people—the love of God toward the outcast.”

The first tier of the cargo ship-sized buildings becomes a stage for the carolers. The upper tier railings fill with inmates that have become accustomed to caroling as a familiar tradition away from home.

“It was amazing going from building to building,” said Lam “I felt the presence of the Lord when we were all singing together.”

Some years there have been almost 100 volunteers from Tiburon Baptist Church, Open Arms Church, and other Christian church organizations that gather to spread the good tidings through festive songs.

“The first time I saw the carolers, I thought ‘what the heck is this?’ I had never seen anything like it in any prison before,” said inmate Jose from West Block’s second tier, “But now I look forward to it every year.”

According to a Time article, the 19th century tradition of caroling from door-to-door started in England by groups of choristers hoping to be awarded with a gift.

“The singing of Christmas carols at a stranger’s door assumes a similarity of culture among carolers and audience,” said Chris Brunelle, an assistant professor of classics at St. Olaf College in the Time article.

“When the angels first proclaimed the gospel it was to the shepherds that were Israel’s lowliest, outcast citizens,” said inmate Capell. “We are society’s outcasts. So, it’s nice to share in the singing tradition of the angels that announced the good news.”

Caroling this year will be on the evening of Saturday, Dec. 16.

“Our church members can’t wait to come and see the men’s faces light up,” said Lam “I love to see lives change.”