The Golden State (GS) Warriors are national champions, but after their sixth annual road game behind the walls of San Quentin State Prison. They lost 103-102 despite Bob Myers’ 32 points and 31 rebounds performance. The “home team” celebrated the victory by poses with the 2017 NBA Championship trophy.

“They earned the win; they out-played us,” said Myers, the NBA Executive of the Year, for the second time. “It was very fun … Everyone was great except the dude who guarded me today.”

Even before the arrival of the GS team, 31-year-old Cornell “The Fatality” Shields looked determined. While he prepared to play against NBA royalty for the first time, a funeral home in Oakland prepared Brenda Jackson, his mother who was 52 years old, for burial. Dubbed “The Fatality” for what he does on the basketball court, he planned to win and dedicate the win to his mother.

“She made me focus — her, my wife and my son,” Shields said.

Meanwhile, at the entry to the prison, ABC Sports Commentator Larry Beil was the first to walk through the gates. Seconds later, Myers, general manager of the Golden State Warriors, led his team of GS coaches and staff, including Assistant GM Kirk Lacob and GM of the Santa Cruz D-League Warriors Kent Lacob; scout Khalid Robinson, and Player Development Coach Luke Loucks, among others. Myers carried the Larry O’Brien Trophy.

Golden State Center Javale McGee entered the prison last. Myers passed the trophy to McGee, who carried it down to the San Quentin Lower Yard.

“They asked if I wanted to go to San Quentin, and I said yes,” McGee said, as if carrying the Larry O’Brien Trophy into a prison happened everyday. 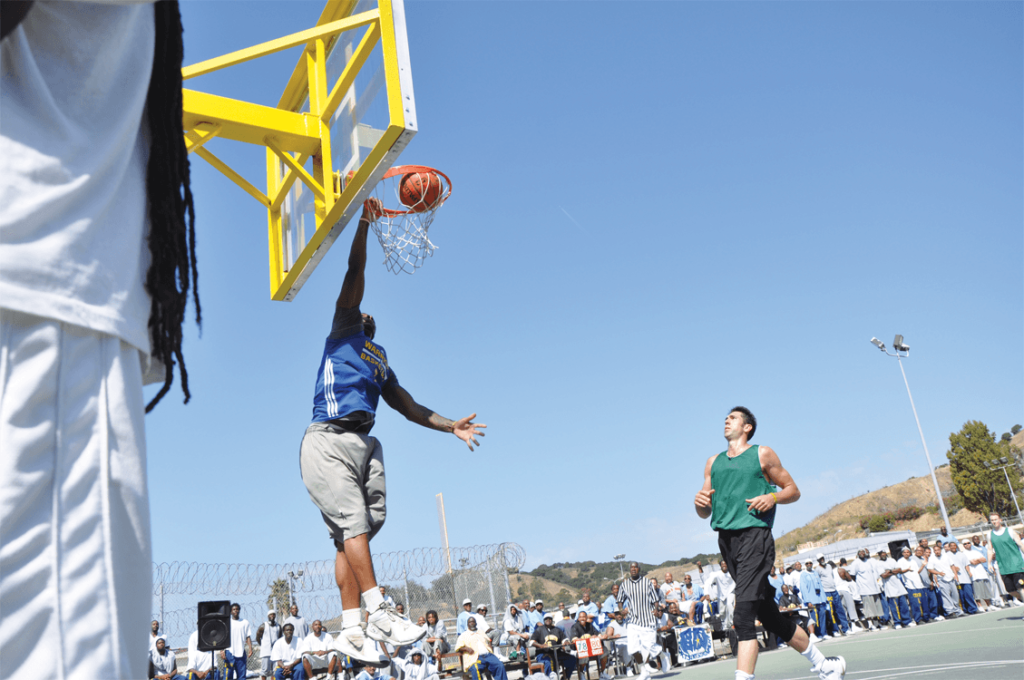 Key players were noticeably missing from both teams. GS assistant coach and former 76er Willie Green, who scored 18 in last year’s game, went to represent Golden State at a hurricane pet rescue event. Chris DeMarco, who averages 20 points per game at Quentin, stayed out due to an injury. The SQ squad also played without starter Tevin Fournette (injured) and Anthony “Half Man, Half Amazing” Ammons (out to court).

“Tevin and Ant are very key players,” Allan McIntosh, SQ’s leading scorer, said. “Without them, we knew it was gonna be a struggle and that we needed to play as a unit.”

“The whole idea is for SQ sports to show thanks to the organization for all the work they’ve done for us,” said James Benson, who organized the making of the banner. “We donated it to Golden State so they could have people bid on it and donate the money to Irma relief.”

After intros, Prison Sports Ministry’s Bill Epling, whose web of connections helped make the annual games happen, opened with a prayer for the hurricane victims.

Then the game started with the opening tip going to SQ’s McIntosh who, like all his teammates, wore real NBA Warriors jerseys donated by their namesakes across the Bay.

As SQ’s leading scorer Allan McIntosh spun inside for a layup on Kirk, the referee blew his duck whistle. Kirk threw up his hands and shook his head at the call.

Beil responded with a laugh: “I thought we were playing by prison rules!”

SQ continued to play great defense but failed to convert. They ended up behind 23-13. Then Shields stepped up, going hard to the rack and scoring 4 unanswered points.

By the end of the first quarter, GS held a 25-21 lead, scored mostly by Robinson, who scored 10 to Shields’ 7 in the quarter.

MaGee joined in the play-by-play antics in Beil’s place just in time for a front row seat as SQ’s Phillippe Kelly performed a rap he wrote that morning about San Quentin’s team beating Golden State. Incarcerated people watched Kelly’s rap on ABC the next day from their cells.

The lead went back and forth until tied at 48 by halftime. 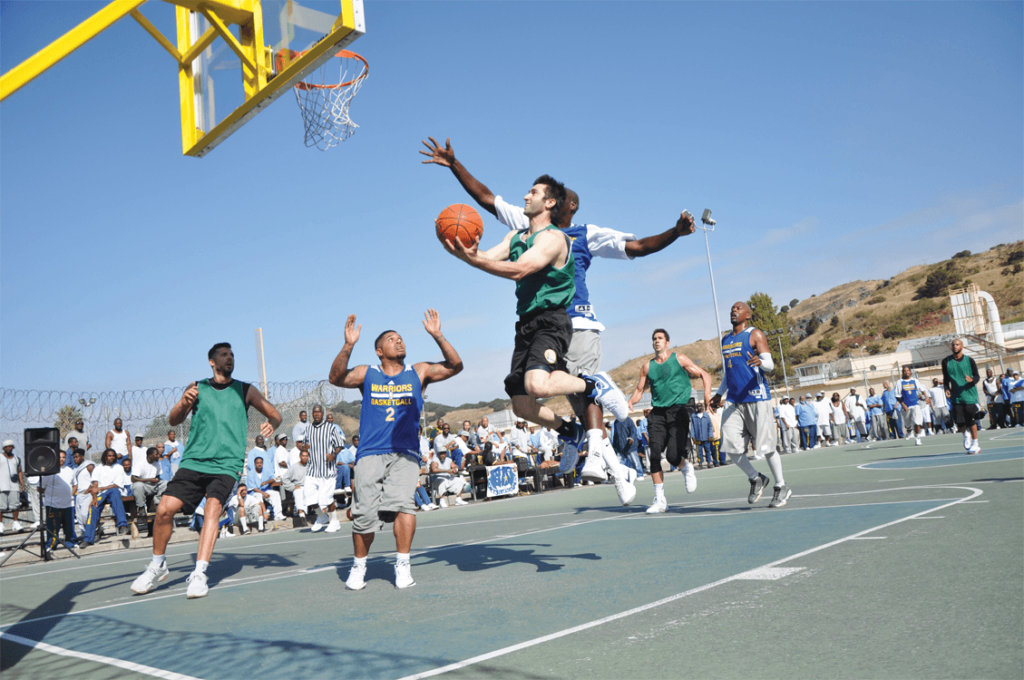 The SQ squad huddled around Coach Cuevas, and he told them, “Keep running them. We’re gonna win.”

The Golden State GM, who went to UCLA, gave a brief speech about how years ago, coming from a place of privilege, he was a little scared to enter a prison, but he had misjudged.

As the second half started, McGee went to play chess, and Beil retook the guest play-by-play announcer seat.

McGee, checkmated twice, went to try his hand at dominos. He won the first game then lost three straight.

“This was a new experience, I got a chance to play someone of his caliber and manhandled him,” joked Tofa Sekona, who played McGee in chess. “I got autographs to share with my children. This truly helps us psychologically.”

In the third quarter, SQ fell behind 61-52 but charged back. Shells blocked Myers and Harry “ATL” Smith scored five points straight from the line and the field, narrowing the gap, 61-57.

Then came SQ Andre “NBA” Belion. He nailed a three-pointer and yelled, “Ahhhhhh.”

On the next unanswered possession Belion hit a floater, giving SQ the lead back at 62-61.

In the fourth quarter, Smith gave SQ a three point lead with a break-away dunk and six minutes left.

Guard Joshua Burton followed with a three-pointer. The game came down to the final seconds and a ref’s call.

Robinson answered with a three-pointer, cutting the deficit to 101-99.

Then Robinson ended up with the ball again after a SQ turnover. He launched a three from the right-hand corner that missed, but the ref called a foul on Shields.

“He bumped him on the way by as the shooter came down, knocking him to the ground,” said ref Ishmael Freelon.

The ball went to Shields who went strong to the rack and scored, putting SQ up 103-102 but leaving 7sevenseconds for GS to responded.

Myers tried to spin away from a defender, but he turned right toward Shields who wrapped his arms around the ball and tried to wrestle it from Myers as time ran out.

Kirk Lacob said, “We had it. They made a great play. That dude (Shields) was MVP.”

Shields, who scored 19 points with 9 rebounds, said, “It was liberating. It was a lot of fun because we played all around team ball — we were a unit.”

Then, with a sad smile on his face, he dedicated the win to his mother.

McGee said, “This was dope, I don’t know what I will take away from this event. I’m not a psychic, but I know it will be positive.”

Cuevas said, “I don’t think there is a guy we can take out of the equation and still get that win. I can’t think of a player who didn’t have a big play. I think we won as a team.”

After the game, Kent Lacob told Smith, “The Phenom,” he could try out for the Santa Cruz Warriors when he paroles next March.

“All glory to God,” Smith, who scored 20 points with 15 rebounds, said. “All the trials and tribulations we went through during the season paid off.”

Beil said, “This is no different from any game out in the neighborhood.”

There was one difference: The SQ squad held Golden State’s 2017 NBA Championship Larry O’Brien Trophy while they celebrated and posed for ESPN, Life of the Law, SQ News, The Athletic, San Francisco Chronicle and ABC photographers.

—Marcus Henderson contributed to this story.