San Quentin, California – May 21, 2018 – The premiere issue of Wall City, a magazine that reflects the curiosity, intellect, dedication and professionalism of the men working as journalists inside San Quentin, will be released on May 29, the editors of San Quentin News announced.

Copies of Wall City will be distributed to the libraries and administrators of every California prison. Members of the public can access a free digital version or order print copies via MagCloud . A link will be published at sanquentinnews.com for easy access. Distribution of subsequent issues will be determined after an evaluation of the response to the first issue.

The quarterly 32-page magazine will give the audience, both inside and outside the walls of prison, direct access to issues that shape the experience of incarcerated individuals and impact what happens when they return to their communities.

Wall City’s first cover story profiles five men who were released from the secure housing unit (SHU) at Pelican Bay into the general population at San Quentin. It gives readers a glimpse into the effects of long-term isolation, as these men experienced.

“I felt Pelican Bay SHU was the last stop, I felt there was no return to civilized life,” says Guss “Lumumba” Edwards, in the article. “Now I know there’s light at the end of the tunnel, and it is not an oncoming train.”

Other articles include reports on innovative anti-violence and environmental programs at San Quentin, legal and health updates, and a financial literacy column by San Quentin inmate and financial educator Curtis Carroll, better known by his nickname, “Wall Street.” The magazine also includes selected poetry, a crossword puzzle and photography.

“We want to put a human face on returning citizens to help eliminate the prejudice they typically encounter,” says Juan Haines, senior editor of San Quentin News and Wall City. “We want the magazine to help inform the public that being receptive to rehabilitated returning citizens serves their community’s interests.”

The human interest stories are designed to inspire incarcerated men and women and to inform people outside the walls about the avenues for change, with the hope that more incarcerated people will seek similar opportunities, adds Haines.

“The long-awaited and highly anticipated Wall City magazine is yet another example of the amazing work coming out of San Quentin State Prison,” said Nigel Poor, co-creator, co-producer and co-host of the award-winning podcast, Ear Hustle. “It’s essential reading for anyone who cares about getting a well-rounded education on life behind bars. And, of course, like the San Quentin News, the stories are brought to you by those who live it. This is your opportunity to learn more about the rehabilitative efforts and unique perspectives as well as the creativity that happens inside California’s oldest prison.”

The quarterly magazine will focus on criminal justice policies, public safety, and prison reform, featuring stories related to incarceration, rehabilitation, and reentry. “It is this direct access to the truth about whom we as a society have incarcerated, and who they have become behind the walls, that will enable people to recognize and support positive engagement with the incarcerated and formerly incarcerated as we consider effective sentencing and parole policies, for the public good,” said Nancy Mullane, co-founder of the podcast, Life of the Law and a co-sponsor of the Society of Professional Journalists chapter at San Quentin.

When someone leaves prison and returns to the community, he or she encounters a negative social climate. Wall City puts a human face on returning citizens and demonstrates that being receptive to these men and women serves the community’s interests.

“The public rarely gets a glimpse inside a prison, and the magazine gives them a stereotype-shattering peek behind the walls. There are thousands of stories that need to be told, and incarcerated journalists are the only ones who can properly tell those stories,” said Michael Bott, co-sponsor of the San Quentin SPJ chapter.

More information about the magazine can be found at sanquentinnews.com. 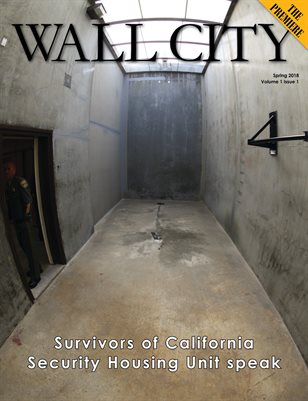 Wall City – from the editors of San Quentin News

Produced by inmate-journalists at San Quentin State Prison in California, Wall City magazine provides people, both inside and outside the walls direct access to the curiosity, intellect, dedication, and professionalism of the men inside. Wall City will focus on criminal justice policies, public…