The rehabilitative spirit flowed deeply at San Quentin’s 11th Annual Day of Peace celebration. The San Quentin community came together on the Lower Yard to build relationship bridges and support the incarcerateds’ transformation.

“This is a day I want to share with the spirit of Tiffany Dawn Boyce,” said Carlos Smith, who drew a mural as a memorial to his crime victim. “It’s a time of remembrance, and I want to share this with her family in this time of healing.” 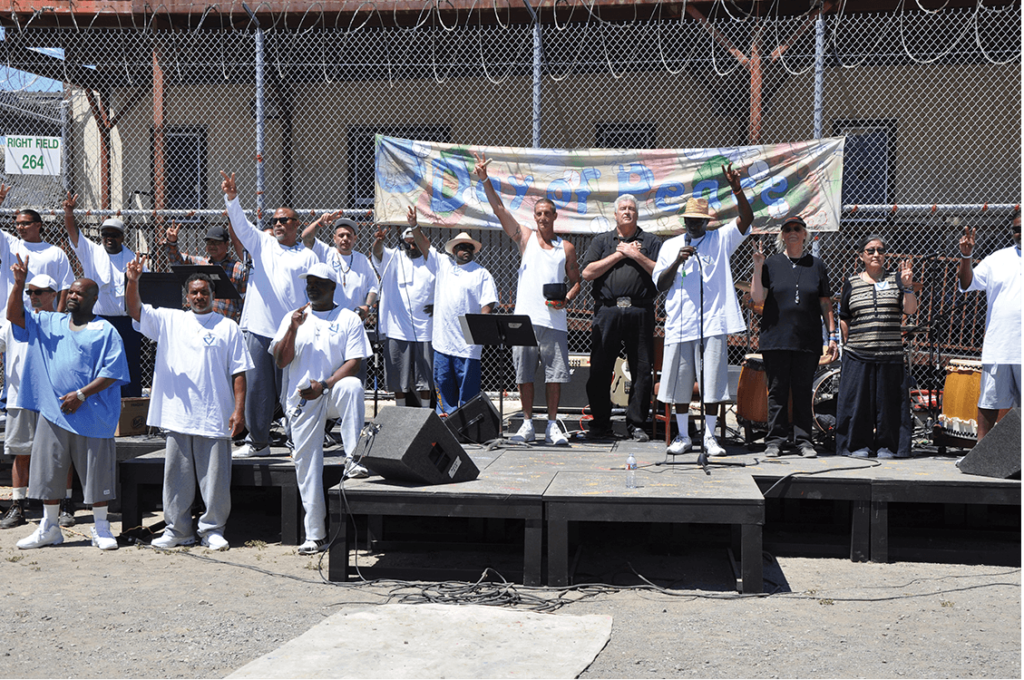 The celebration was born out of a violent race riot in 2006, just before a scheduled yard event. The incident occurred when San Quentin and the whole California prison system were at their highest level of overcrowding. The violent outbreak led to a multiracial group of men, most serving life sentences, asking the San Quentin administration for a Day of Peace.

To commemorate that incident, the men in blue wore white T-shirts, as they walked around the yard visiting tables for numerous self-help programs.

“Blessed are the peacemakers,” said Associate Warden S. Albritton, quoting Matthew 5:9 from the New Testament, as he welcomed the inmates, guests and volunteers to the May 20 event. He greeted the crowd with the words of Warden Ron Davis, who noted that access to rehabilitation programs fosters a peaceful environment. 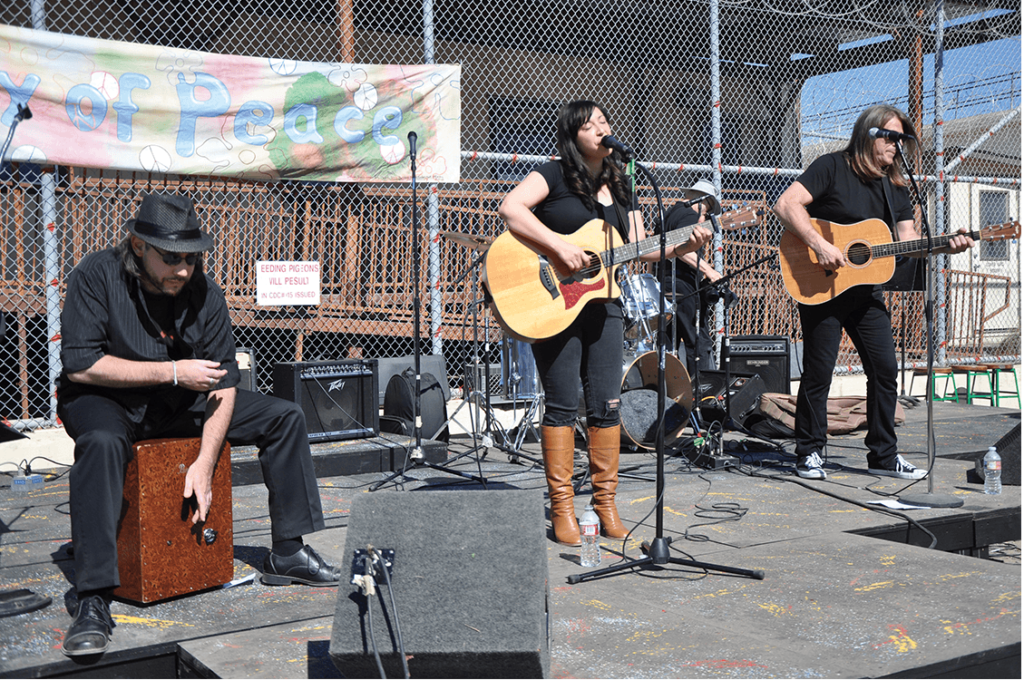 “This was the closest thing to transitioning back to society,” said prisoner Kahlil Dallas. “This day gave you insight into the different forms of rehabilitation. Prison being what it is, today broke down a lot of barriers.  It teaches you in the time of confrontation there is always time for peace.”

The event looked like a job fair held in a park with inmates, volunteers and staff mingling around tables representing various services.

“Today is a way we can explain to people about our college program,” said volunteer Fakhri Hiba, for the Prison University Project (PUP). “It also gives us a chance to see the different side of our students away from the classroom. This is a testament that everybody can integrate with programs and make a 180-degree turn.”

Bread & Roses, a Marin County organization that has been bringing entertainment inside the walls of San Quentin for many years, provided music and performances. 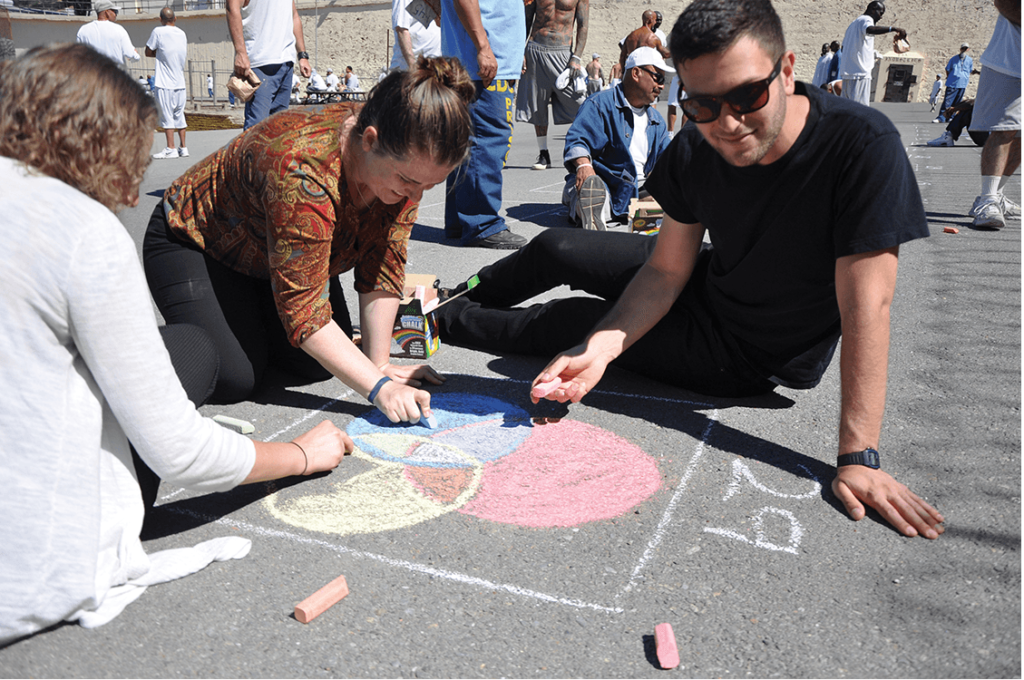 “I wanted to share my gift of music with the men, and they seem to love it,” said Francesca Lee, lead singer of her group, Francesca Lee Trio. “Everything is obsolete when you connect with music. There is no judgment; and in this moment of time you can let go of the past.”

The band performed hit songs, including “Crossroads” by Robert Johnson and “No Woman No Cry” by Bob Marley and received loud applause.

“This day generated a lot of positive energy. I feel lucky playing here knowing the history of this day,” said Donovan Plant, the trio’s guitar player.

The prisoners received a gift bag of snacks donated by the package vendor company Walkenhorst’s. Josh Walkenhorst and Natalie Tovar staffed their table as the prisoners walked by expressing their appreciation.

Day of Peace bracelets, made of rubberized plastic, were traded among the men, who exchanged different color bracelets while eating candy and chips from their bags.

“We intentionally chose to use the different color bands. It helped the people to communicate with each other, who wouldn’t talk before this day,” said prisoner Darnell “Moe” Washington, who emceed the event. “More men are coming out to participate, and this symbolizes our growing unity.”

Last year, rain ended the Day of Peace celebration early and caused the yearly sidewalk art contest judging to be postponed. The sunny weather was welcome.

“More men are coming out to participate, and this symbolizes our growing unity”

The sidewalk art contest, sponsored by William James Association, crowned Jerry “Maleek” Gearin this year’s winner with his multi-color peace sign, square #33. Jose Olivarez took second place with a marijuana leaf and a 420 theme, square #17. The pavement on the Lower Yard was divided into two-foot by two-foot squares where 31 artists created imaginative drawings in chalk.

Fred Tinsley and Gerald Morgan placed third with a fierce-looking rabbit holding a peace symbol; square #6 and James Craft received an honorable mention with a Mona Lisa portrait with her hand making the peace sign, square #10. Volunteer Patrick Mahoney judged each of the 31 entries, all of which featured “peace” as its subject.

“The great responsibility we have in Uruguay is to show the world that this system of freedom with regulation works better than prohibition.” Eduardo Blasina, founder of the Montevideo Cannabis Museum, told reporters regarding the legalization of marijuana which took effect in July.  Uruguay is the first nation to fully legalize the production and sale of marijuana for recreational use.

“Marijuana Use Is Fully Legal” by Ernesto Londono in July 19, 2017  nytimes.com/international

Healing and remembrance were also at the heart of the day as noon hit, and the crowd of hundreds stopped and faced the stage. The audience members lowered their heads and slowly raised their hands in two-finger peace signs for a minute-long moment of silence.

“I love the interaction of day and the diversity; it was a wonderful thing,” said prisoner S. Dang, monitoring the Origami group table. “You could tell the connections with people was pure.”

At the Origami table, guests and inmates learned how to make paper hearts and dragons. Origami is the ancient Japanese art of folding paper. The group meets in the chapel area and provides a therapeutic meditative process through personal creation.

Other lesser-known groups like The Urban Ministry Institute and Enneagram Prison Project got a chance to introduce programs to the yard and received a large number of sign-ups.

Enneagram is a 16-week curriculum that teaches you how to trace your patterns of thoughts and how to recognize different personality types. The Urban Ministry is a three-year seminary program structured around serving the urban communities.

“We believe we are raising an army of believers here, and these soldiers won’t be afraid of going into the dark and dangerous place,” said Pastor Bernard Emerson, facilitator. “We want them to have the tools to do it with.”

“This event was big for me; it was good to be somewhere other then the chapel. It gave us time to share their (inmates’) lives for a day,” added Pastor Emerson.

One of the special moments was the performance by the Japanese group Taiko Drummers, known as the drumming grannies. This year they added some youth to the show. With every verbal cry from the group, the crowd shouted along with the drumming.

“This is the one event we talk about all year,” said Peter Yung, Shaku Hachi’s flute player. “Since coming here, you can see a lot of the misconceptions about prison, even though we are only seeing a little part of it. But, what I do see is the smiles and what they do; it’s amazing and I’m hopeful.”