Representatives from the San Jose Earthquakes soccer team jumped at the chance to shake the field at San Quentin State Prison and left with much more than a 4-1 victory over the home team.

“Soccer is more than a sport,” SQ player/coach Tare “Cancun” Beltranchuc said. “It’s an opportunity to build community. And, I can transfer these skills into my real life. Like today we faced adversity and we didn’t give up.”
Active first year Earthquake (EQ) players Eric Calvillo and Frenchman Paul Marie came to support the EQ staffers who teamed up with a Bay Area community team known as the Outsiders for a game against incarcerated men on the Lower Yard.
“It hit me as something interesting, and I wanted to do something different,” Calvillo said. “Everybody needs help, and I can help by giving up my time. It sucks that I can’t play.”
Marie added, in a French accent, “There are a lot of people here that didn’t have the same chances as me—I always like to support through sports.”
When program sponsor Andrew Crawford approached the EQs about visiting San Quentin, Community Relations Director Marisa Silver loved the idea.
“She told us, ‘You guys like to play soccer right? How about playing at San Quentin?’” EQ goalkeeper Alex Palomarez relayed. “We were excited about it.”
Anthony Gouch, who works in the EQ sponsorship department, said. “It was too good to pass up. I wanted to be part of something special.”
Incarcerated person Angel Villafan, who is 28 years old, told his son, 5-year-old Baby Alex, that the EQs were coming to San Quentin.
“My son lit up,” Villafan said. “He said he’s jealous; I told him he can’t be jealous of me—I’m in prison.”
Villafan thanks Crawford for getting the EQs to join the SQ soccer program.

Contract clauses prevented the professionals from taking part in the game but not from coaching.
Calvillo helped Outsider Laura Hayward lead their joint team to victory. She was the field general who added strategy and made the substitutions while he provided motivational speeches.
“Here’s the scouting report: I know nothing about these guys,” Calvillo told his team as they huddled around him pregame. “We run this field; it’s ours now. Earthquakes!”
The EQ/Outsiders struck first in 12 minutes. Outsider Dario Abramskiehn received a far post cross pass and volleyed it in.
For Abramskiehn, the experience of playing with the EQ meant just as much to him as it did the incarcerated futbol players.
“It’s pretty different to play with people who do this as their job,” Abramskiehn said. “It’s generous of them to come spend their time here.”
In the 25th minute, EQ/Outsiders added to their lead with a goal kicked in by Outsider Alex Lentz off a weird bounce and a misstep by SQ Angel Villafan.
“This is a great place to score a goal,” Lentz said. “I was lucky to get the ball past the goalkeeper.”
SQ’s Ronald Luna kicked a shot straight at the net in the 28th minute, but Palomarez made the diving catch to stop the goal.
At halftime, the home team was down 2-0.
“Great half,” Calvillo said. “We don’t stop though. It’s 0-0 in our head. Go get the win, yeah!”
In the 55th minute, EQ Anthony Gouch made a goal kick that rebounded. EQ Aaron Gordon kicked the ball in for another EQ/Outsider goal.
In the 64th minute, Gouch kicked a long-distance goal that shot past the SQ goalkeeper Marco Villa.
Gouch, 26, played soccer for San Diego State University. Gouch’s brother plays for the National team in Sunderland, England.
San Quentin scored in the 72th minute. Ruben Mondragon blasted the ball in from the left side.
“It’s an honor to play with them and a blessing to get a goal,” Mondragon said. “I hope we keep this relationship going.”
Despite the final score, the SQ squad impressed the pros.
“You guys put up a lot of fight,” Calvillo said. “All glory to God. It’s all His plan.
Coach/player SQ midfielder Juan “Carlos” Meza reminded everyone that what took place was bigger than a soccer game.
“We’re getting out; thank you for seeing us as citizens that are going to re-enter society,” Meza said.
Sgt. Robert. Gardea, who escorted the team in despite the overcast skies that threatened rain, added that soccer “teaches team building, which applies to everyday life. Plus it brings hope.”
Juan Nunez, 29, just arrived at SQ from Donovan Correctional Facility three weeks before the game and got a chance to play against the EQ/Outsider squad.
“It inspires me to stay out of trouble,” Nunez said.
The game was epic despite the score.
The SQ soccer team has struggled to pick a name. They settled for dividing the soccer players into the A Team and the B Team. However, after the great experience with the EQ visit and receiving cleats donated by that organization, they decided to call themselves the San Quentin Earthquakes.
“That’s going to be the name of the main team,” SQ soccer spokesman Beltranchuc said.
The game was also epic for the EQ squad.
“I won’t forget playing here,” EQ Event Operations Luke Devogelaere, who once played on the Oakland Raiders training field, said.
Gouch added, “This is definitely the coolest place to ever score a goal. We were supposed to bring joy and happiness to them (SQ), but they brought it to us, too. I enjoyed getting to meet everyone, hearing their stories and seeing the smiles on everyone’s face.
“We’ll be back.” 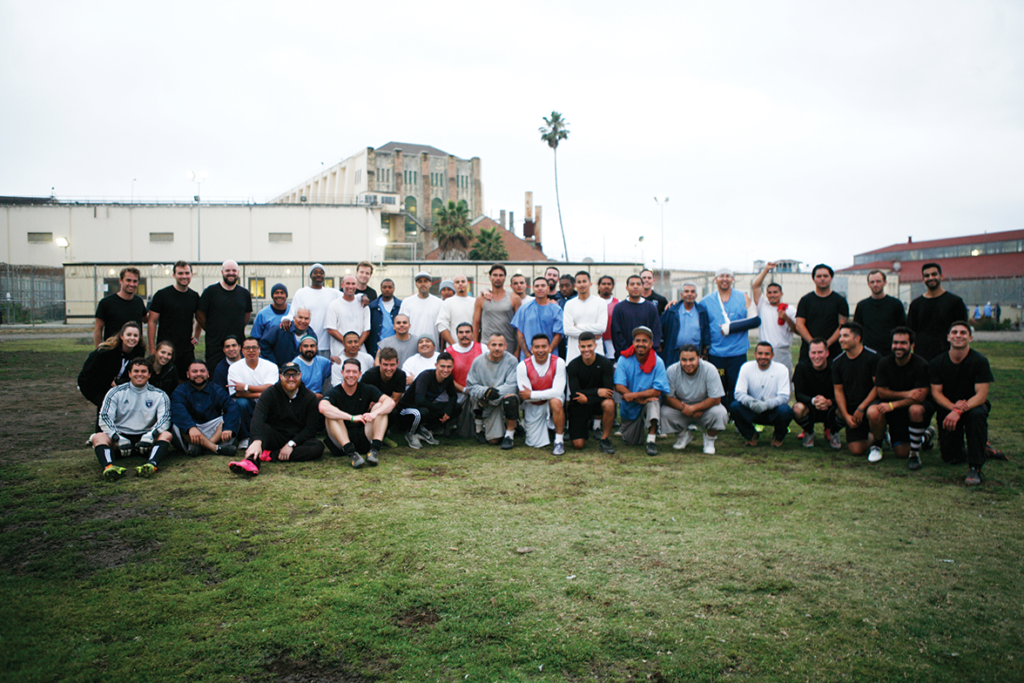 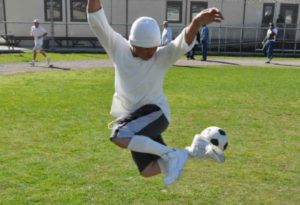