Add the San Francisco Opera (SFO) to the list of historic performances and celebrities that have passed through the infamous Bastille by the Bay – San Quentin State Prison.

Outside guests, medical staff, teachers, associate wardens and at least one captain joined more than 50 inmates who witnessed an opera for the first time during their lunch break. The show lasted a little more than an hour.

Each artist introduced their piece. J’Nai Bridges, an African-American from Tacoma, Wash., debuted with SFO in 2016 as Bersi in Andrea Chénier. She opened the performance with “Habanera” from Carmen.

“Carmen is a very rebellious woman who doesn’t like to be boxed in,” Bridges said about the aria, which is a long solo voice in an opera piece with an instrumental accompaniment. 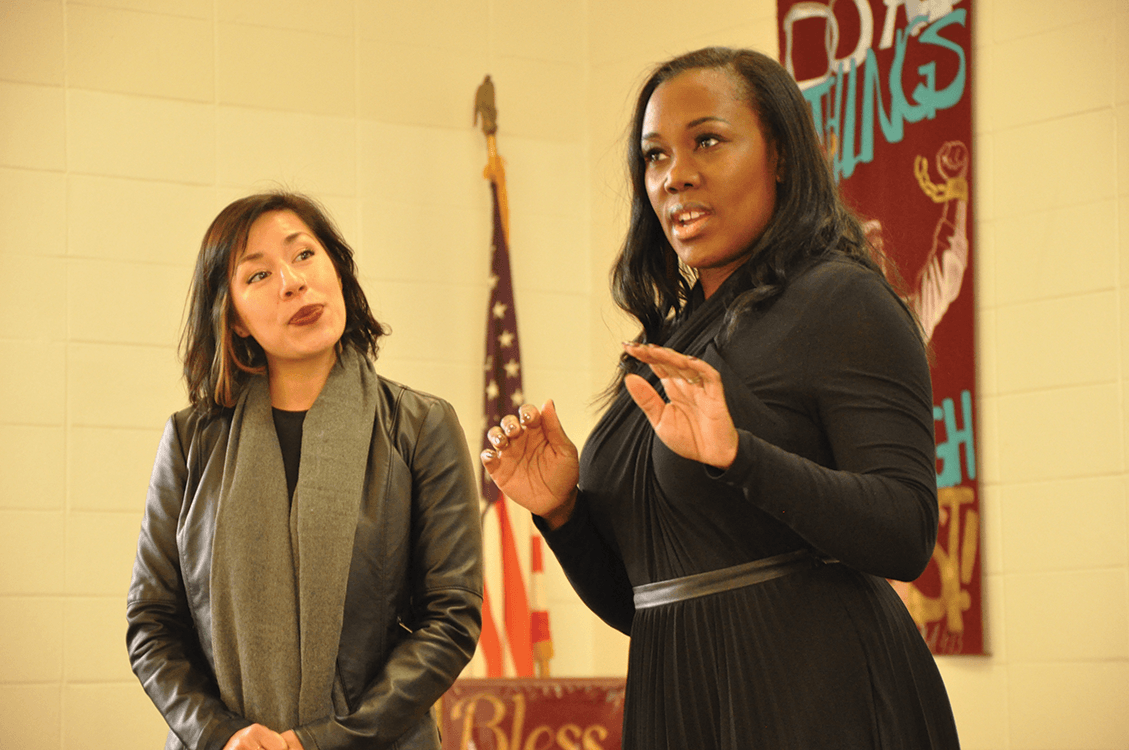 Ronny Greenberg, highly skilled on the piano, was the accompanist. He’s from Montreal, Canada, and originally debuted with the SFO in 2014. His playing was a reminder that synthesized music is no substitute for a virtuoso playing the real thing.

Critics often judge songs through a veil of pretentious technical terms. The inmates did not. Some said they were “amazed to see African-Americans singing opera.”

The performance was a lesson on breaking down stereotypes for the artist and inmates.

It wasn’t SFO bass singer Soloman Howard’s first time in prison. “I did Attica (State Prison in New York) two years ago,” he said. “At Attica, we didn’t get to interact with the inmates as much. You guys have a legitimate rehabilitation program here. That makes you that much more human to us.” He’s from Washington, D.C. This was his SFO debut. 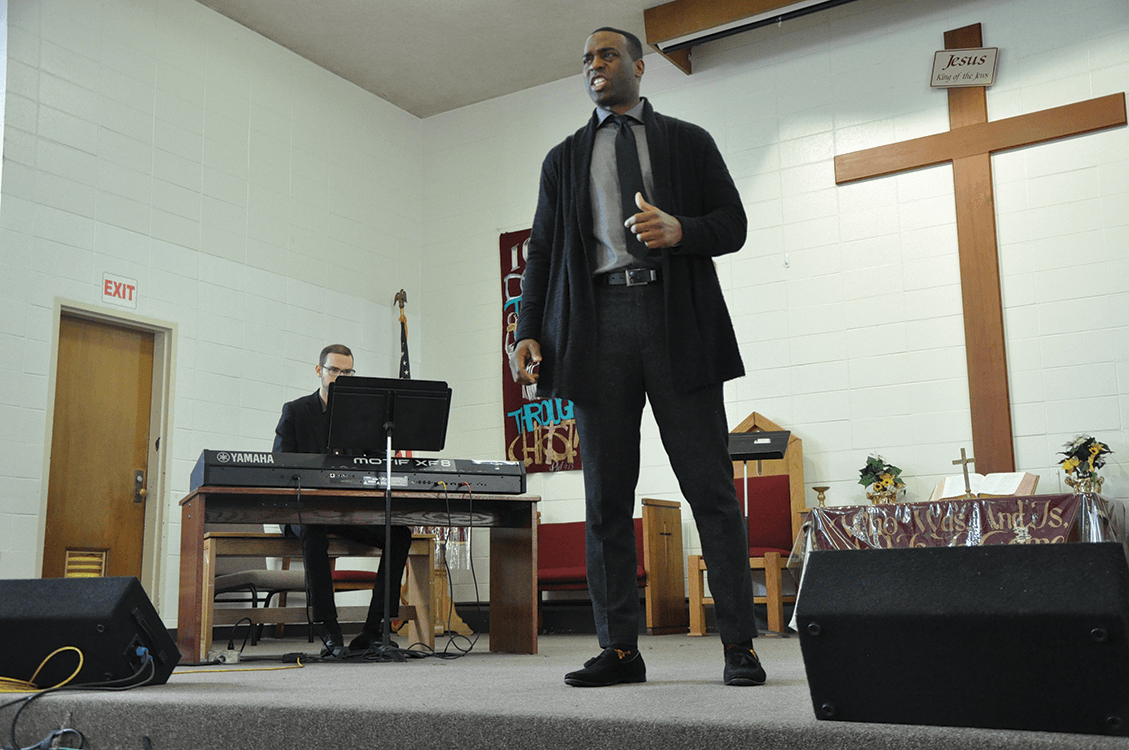 At first glance, Howard, a tall African-American, built like a basketball player, looked like anyone’s brother from the neighborhood. But it was his deep bass vocals that ousted any misconception that he came in with the NBA’s Warriors. He was composed when he entered the chapel wearing a fedora, gray shirt, black tie, matching pants, and three-quarter-length black sweater. The word “cool” comes to mind when looking at him.

Howard projected confidence and a serious demeanor. He sang “Il Lacerato Spirito” from Simon Boccanegra, a song about a grieving father distraught over the death of his daughter. He told the audience he was able to summon the emotion to sing this song by imagining himself in the same situation with his own daughter.

The music moved the audience. And with a striking smile, Andrea Lett from Winnipeg, Canada, took to the stage. A soprano, she sang “Der hölle rache” from The Magic Flute. She said, “Queen of the Night – the first time I heard this song I thought it was a happy song. But the queen is the villain of the entire piece.”

Lett stayed in pitch as she reached high octaves, keeping up with Greenberg’s piano playing. At times, the higher notes in her vocal range simulated the sound of a violin, captivating the audience as she inhabited the character she sang about.

Kearstin Piper Brown was another of the SFO’s impressive performers. Originally from Rochester, N.Y., this African-American soprano sang “He’s Got the Whole World in His Hands,” a piece familiar to most listeners albeit from a different genre of music.

Overton is the co-founder and artistic director of the performing arts organization Opera Noire of New York. It was created to empower African-American artists. He originally debuted with the SFO in 2009 as Frazier in Porgy and Bess. It was his first time inside a prison. “I’m blown away a bit,” he said. “All the guys are friendly and appreciable.”

Every song drew rounds of applause from the audience. The show continued with Brown and Lett singing a duet on Sull’Aria from The Marriage, by Mozart, accompanied by Greenberg on the piano playing arpeggios and melodic phrases as these ladies alternated stanzas.

Later, Overton and Brown performed the duet “Bess, you is my woman,” from Porgy and Bess. “It’s a song about unfinished love,” said Brown. “Morning time, and evening time, and summer time, and winter time …” the duet sang, complementing each other with their baritone and soprano voices testing the listening range of the human ear. Greenberg’s rendition of George Gershwin on the piano made it all real.

Then, Brown, Bridges and Overton sang “Soave s’il vento,” an Italian piece by Mozart from Cosí fan tutte. It’s a song about two women who believe their lovers are going off to war. But their men have faked their deployment to spy on the women to see if they’ll remain faithful. The women don’t.

Lett and Bridges sang “Flower duet” from Lakmé, a song written at a time when people were fascinated with Eastern culture. “You’ve probably heard this piece in movie and soundtracks,” said Bridges. “It’s also been used in video games.” The song was arranged like a suite of music. Several times when it appeared to end, it started anew and the women kept singing.

Soloman returned to sing “Old Man River” from Showboat, a familiar piece of music for the audience after  the soaring flight with opera.

“We’re honored to be here and have the opportunity to give back,” said Howard. “You’re special to us and important.”

One inmate remarked that Howard sounds like Paul Robeson. “He was a constant inspiration,” replied Howard, who then graciously gave a special thanks to inmate Stephen Pascascio, who worked the mixing console.

The audience gave a standing ovation and cheers as the SFO returned to the stage at the end of the performance. They all held hands and took a bow before the audience.

During a short question and answer gathering after the performance, members of the SFO discussed some of their favorite music.

“I love listening to jazz,” said Greenberg. Lett said she listens to a lot of “terrible pop.” Howard said he listens to jazz and Cuban music. Brown and Bridges said they listen to music ranging from Marvin Gaye, Earth Wind & Fire to hip-hop, gospel and country. “Hip-hop gives me my hype,” one of them said, adding, “You need hype to perform opera.”

“I’m hoping we can do this next year,” said Steve Harris, CEO of San Quentin Health Care Services. “So, if you want them to come back, give them another round of applause.” The audience stood and applauded in the affirmative.

After the performance, the group toured the prison. Their first stop was the old dungeon, then past the medical building, library and inside North Block where they saw inmates going about their daily lives. The building holds more than 700 men, five tiers up. From there, they walked by Condemned Row, the commissary and the kitchen, stopping inside the south dining hall to view the historic murals painted by former inmate Afredo Santos when he was incarcerated in the 1950s.

“The murals are amazing,” said Brown. “I wish we could see more.” It was also her first time inside a prison. “I feel like our music should be accessible to everybody. I’m impressed with the CEO (Harris) and all the programs. This is a model for a place of rehabilitation, so I’m hopeful.” She works with parents and children to reduce the school-to-prison pipeline. “I feel blessed to be involved.”

“It’s been really nice,” said Bridges. “I think it dispelled a lot of our beliefs about prison.”