The San Quentin Warriors won again!
For the second straight year, the prison’s premiere basketball team beat the Golden State Warriors squad of staffers 93-85 in a community atmosphere that featured NBA-playoff intensity. The victory had particular significance for San Quentin power forward Harry “ATL” Smith, who paroled a few days after the game.

“All praise is due to God,” Smith said. “It’s bigger than basketball. This program has really been my family. When I get out, I plan to continue repping the Warriors and Jesus Christ.”
The annual games between Golden State (GS) staffers and San Quentin (SQ) started in 2012.
They match up incarcerated men against management, coaches and employees of the NBA champions.
The events unite affluent NBA executives—including Warriors’ assistant general manager Kirk Lacob, son of the team’s owner Joe Lacob—with incarcerated people, through their common love of basketball.
Golden State leads the series four games to three; however, SQ has won two straight since Rafael Cuevas went from point guard to coach. His motto: character comes first, talent second.
“We’re not on this team for nothing,” SQ King Jason Robinson, who suited up with the SQ Warriors, said. “We proved we’re worthy to play with people from the outside and show what community is all about.”
For the Sept. 5 game, Lacob showed up with a team that included Nick Kerr (son of Golden State Coach Steve Kerr), Kent Lacob, Assistant Coach Chris DeMarco and others. First-round draft pick Jacob Evans, a former Cincinnati Bearcat, came for moral support, as signed players are not allowed to play.

The Golden State staffer squad was loaded, but it was missing its leading scorer and rebounder, Bob Myers, two-time NBA General Manager of the Year. Myers usually shows up and shows out but injuries caused him to miss the event.
“Bob had hip surgery,” Lacob said. “He had the operation in May and trained hard so he could rehab in time to be here, but he over-did it.”
Evans, the draftee, came along to see how good the SQ team is and to bring happiness to the incarcerated population.
“I feel like everybody deserves a second chance,” Evans said. “You never know what somebody’s situation is, so it’s important to show that you care.”
The day had a festive atmosphere, starting pregame when SQ resident Philippe Kelly rapped “The San Quentin Warriors Song.”
Then, under an overcast sky, hundreds of fans surrounded the basketball court on the yard as Aaron “Showtime” Taylor announced the starting five for GS, then for SQ.
GS scored first. Chris DeMarco received a pass inside and made a lay-up.
SQ’s Anthony “Half-Man, Half-Amazing” Ammons responded with one-and-one.

First year SQ Warrior Delvon Adams, who started at point guard, followed with a lay-up inside.
A determined Lacob tried to snatch a rebound out of the hands of SQ vet Allan McIntosh. The refs called a jump ball.
Taylor, SQ’s play-by-play announcer, had some fun with Lacob’s aggressive play. “Kirk ran up on him like he wasn’t scared he’s in a prison,” Taylor said.
At the end of the first quarter, SQ’s Tyrrell “City Life” Price Sr. made a three-pointer at the buzzer for a 29-18 lead.
“We’re only down 11; we’re good,” Evans said.
In the second quarter, Kerr, who played for the University of San Diego, came off the bench and helped get GS back into the game, nailing a trey from the corner to bring GS within five at 31-26.
Prison Sports Ministry sponsor Patrick Lacey, who suited up with GS, made an and-one with three SQ players surrounding him to bring GS within two points with 1:48 left in the half.
The half ended with SQ up by a thread, 46-45.

Aaron Miles, coach of the Warriors’ Santa Cruz G-League team, spoke at halftime. Miles, now 35 years old, was the all-time leader in assists in the Big 12 while playing for the University of Kansas. He went on to play for Golden State in 2005, and then played professionally overseas. At the annual game, he coached GS.
“I had a brother who was locked up and I questioned what he would do when he got out,” Miles said. “Now he’s ministering, going to school and doing the right thing. There is something special meant for you when you get out.”
Harry “ATL” Smith spoke at halftime as well, saying that at college, basketball was a business that used him up. The school didn’t care about his grades, only that he could ball. At San Quentin, he found a team focused on character.
That philosophy served him well. For Smith, a tryout for the Santa Cruz Warriors awaited his release.
“ATL is strong physically,” Miles said. “More than anything, I like his character. I’m excited for him to go out there and make a life for himself, to have success at whatever he does.”
As the halftime show, SQ residents David Jassy, a Grammy nominated rapper and producer from Sweden, and Joshua Burton performed an original rap song called “I’m a Champion.”
“No matter what happens today, I’m not quitting, I’m a champion,”Jassy rapped.
The home team kept the intensity up in the third quarter, which ended with SQ up 65-58.
Antwan “Banks” Williams, the sound designer for hit podcast Ear Hustle, performed another rap song between quarters.
In the fourth, Kerr made a series of shots that brought GS to within one point at 71-70 with 7:45 left. First he got fouled from behind the arc and made two of three free throws. Then he made five more points scored.

Smith answered with a hook shot in traffic and SQ’s Dejon Joy added another basket to pull away again.
“Delvon and Dejon played big in this game,” Cuevas said. “They were great mid-season additions who came and dedicated themselves.”
GS’s David “Just Dave” Fatoki stepped up. The 25-year-old from St. Louis played for the University of Washington and pro overseas in Spain. Now he works for GS basketball operations.
With six minutes left and his team down six, Fatoki made a three that made the score 76-73.
But Ammons answered with a runner in the paint, and shortly after that, Joy made an up and under scoop shot over Fatoki.
Smith fouled out with 1:45 left in the game. The crowd applauded.
Fatoki fouled out on the next play and Lacey shortly after as SQ continued to increase its lead.
With SQ up 93-85 and timing running out, DeMarco made a three-pointer too late to count. He led GS with 33 points, 14 rebounds and five fouls. Kerr added 23 and Fatoki 13.

“They attack the basket so much,” DeMarco said.”It’s hard not to foul.” Ammons led SQ with 17 points. Smith added 16 and McIntosh 14.
For the second year in a row, the San Quentin Warriors posed with the NBA trophy in front of a banner that saluted the NBA champions, designed by SQ artist Bruce Fowler.
“It’s surreal,” SQ guard Jesse Blue said. “It’s like finally arriving to some degree. It’s like showing the world we can actually play.”
Kirk Lacob and Miles reported to center court to pay off the pushup bets they lost.
Lacob jokingly blamed the Larry O’Brien Trophy for the defeat.
“We lose every time we bring it in,” Lacob said. “Maybe we should leave it here.” 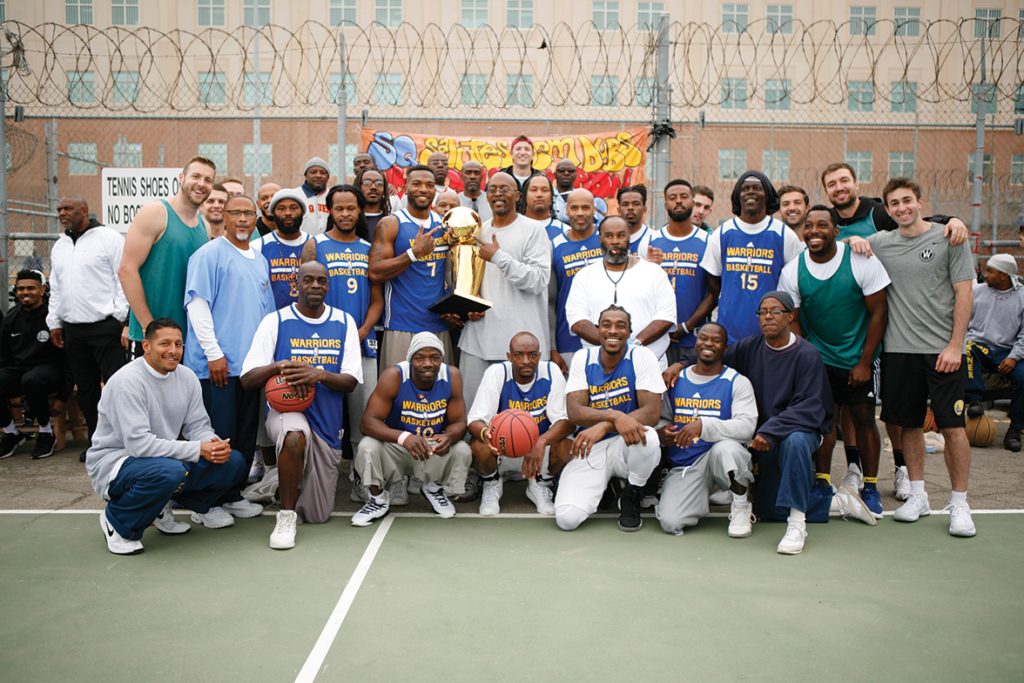