Richard Johnson, 66, a columnist for the Oakland Post, did something he believed impossible while in prison; he attended a ceremony wearing a cap and gown to pick up a diploma for finishing a computer literacy course. 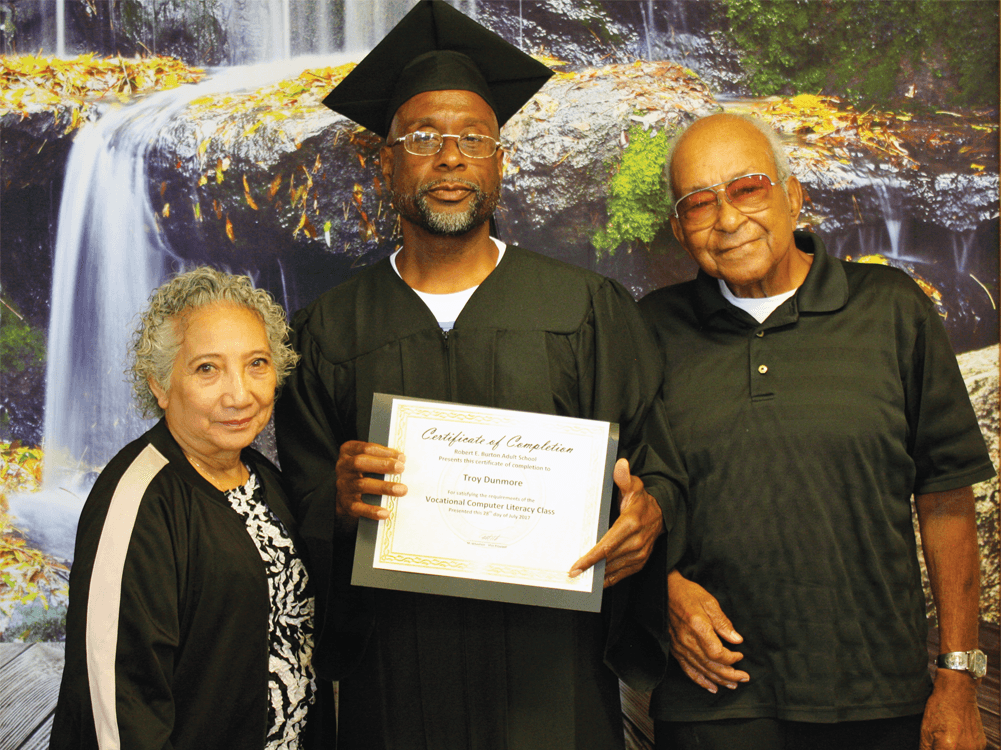 Tessie Dunmore with her step-son graduate Troy and father Albert

Johnson was one of more than 150 inmates to graduate July 21 and July 28 from one of San Quentin’s educational programs including the Robert W. Burton Adult School.

The event, held in the prison’s visiting room, included the graduates’ friends and family as well as their teachers and fellow prisoners.

“He’s changed. I can see the growth in him. I can see the difference,” Johnson’s sister, Yvonne, said. “He could do something out in the world with what he’s learned in here. He’s a caring, loving person.”

“There are ministers in Oakland who use Richard’s columns in their sermons to address some of the problems we have with our youth,” Cobb said.

Johnson is serving a life sentence. He has been incarcerated 22 years and spent the first 19 in the Security Housing Unit (SHU) at Pelican Bay.

“I didn’t start my education until I got out of the SHU,” Johnson said. “When I got to San Quentin, it was amazing to see everyone running around with books. The Oakland Post newspaper played a great part in my evolution.

“Now, I’m thinking about college to become a journalist,” Johnson said. “I like to write about different subjects — sometimes we have to tell the truth.”

Johnson goes before the parole board in 2021.

Inmates who participate in correctional education programs have a 43 percent lower chance of returning to prison than those who do not, according to a study by the Rand Corporation.

The study goes on to find that a $1 investment in prison education reduces incarceration cost by $4 to $5 during the first three years post-release.

“This is something that cannot be taken away”

“Most mainliners actually support, participate in, and desire more rehabilitation programs and only hope that we are not forgotten by those on the other side of the wall,” said graduate Angel Falcone.

Inmate Moua Vue, 37, gave a speech that focused on what brought him to want an education. 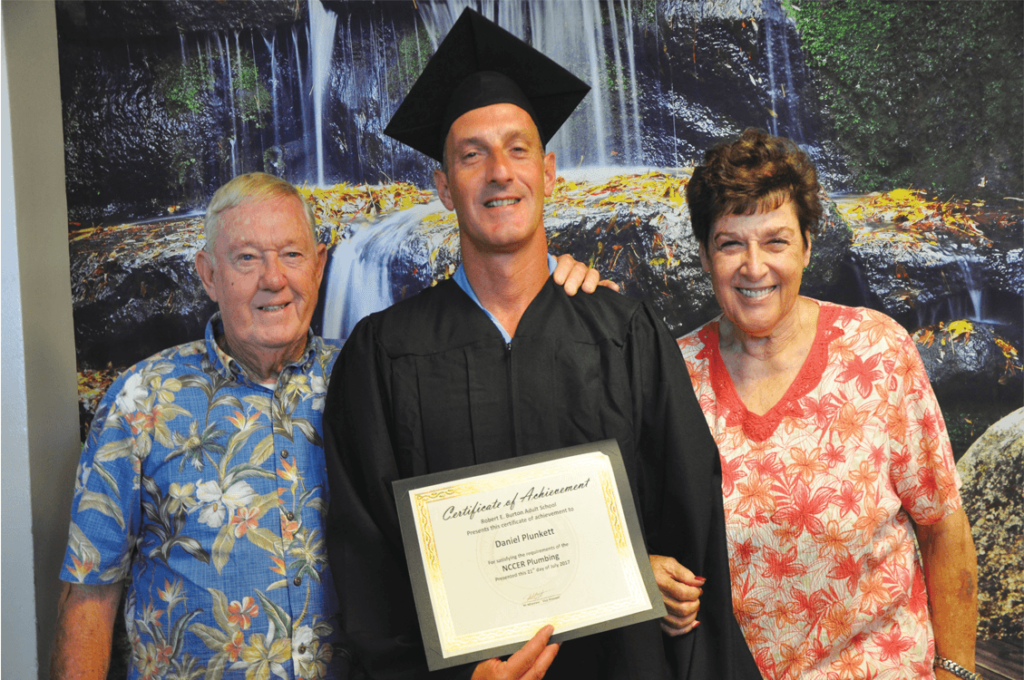 “I remember how my parents would always stress the point of a higher education and added their sacrifices on how they escaped the genocide and got to America after the Vietnam War,” Vue said. “My parents would tell me how they ran through the jungle for days and nights, being careful not to get spotted. Now, looking back, I understand the struggles my parents had to go through. I realize the difficulties of being in a foreign land, speaking no English, having to adapt, trying to raise a family and at the same time keeping to themselves their pain with no support and tools to heal.” 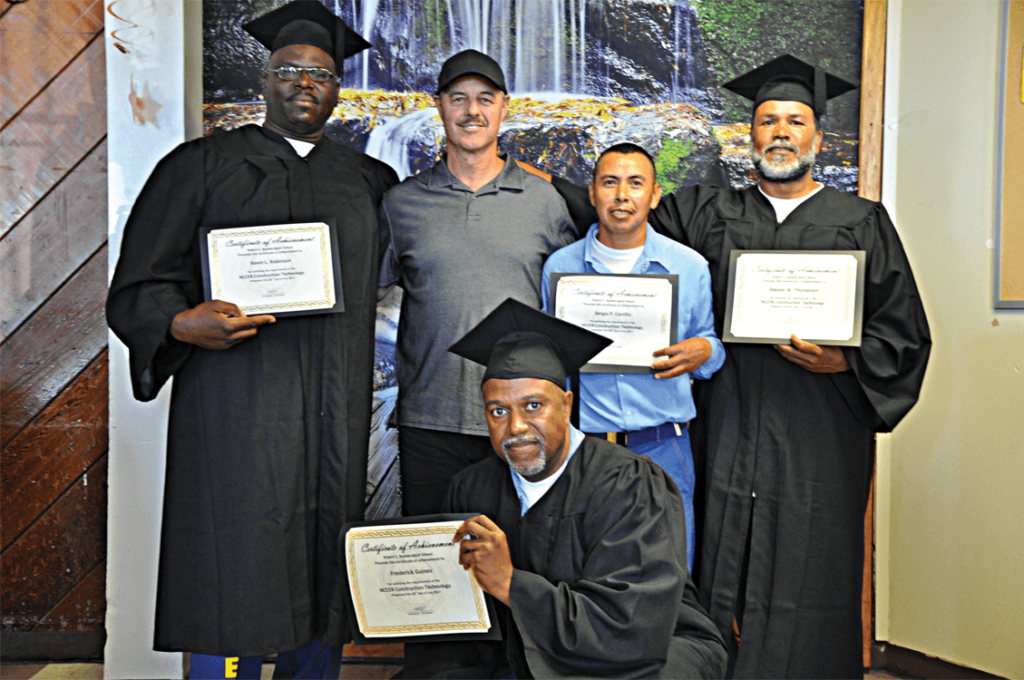 Vue committed murder and attempted murder at age 19 and was sentenced to 82 years to life. He said he continued denying that his family life had a negative effect on him. Ultimately, he said that life behind bars led to hopelessness and to him getting into trouble.

“Being in Ad-Seg allowed me to sit with my reality,” Vue said. “I didn’t have to go on living as I once did, holding onto the lie that there’s nothing wrong with me.”

Other students gave testimonies about what an education and graduation meant to them.

“It’s like begin born again,” said Anthony Coleman, 57. “It’s hard to describe, because you don’t get a feeling like this every day in prison. The individual who never experienced this will be amazed when they do.” 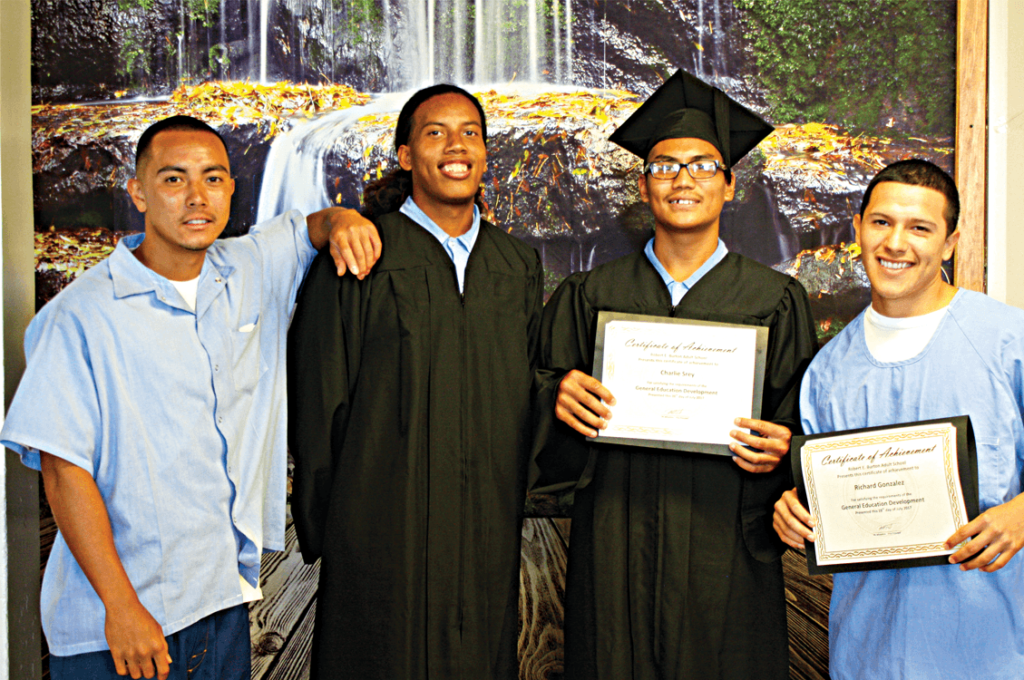 LaDelle Jackson, while taking responsibility for his crime of murder, took pride in obtaining his educational goals. He thanked his mother, who passed earlier this year, as well as his wife and support group.

The previous Friday, Jackson had been part of that graduation ceremony, too. There he said that when he transferred to San Quentin he noticed a college campus-like atmosphere.

“I could no longer give any excuses on why I cannot graduate school, so I adapted to San Quentin, enrolled in school and got it done,” Jackson said.

Graduate Phillip Kelly was 15 years old when he committed murder in 1999.

After arriving at prison, because of his gang mentality, he had no interest in his education or caring about people.

Everything changed for Kelly after he attended a victims’ awareness group. A mother talking about the murder of her son through gang violence weighed heavily on his heart.

“I really started to understand how much damage I caused to the mother of the person I killed; just thinking, I made another human being feel this way,” Kelly said. Gradually, Kelly said he connected with other people, and also himself, and sought out an education.

Things were different for Andress Yancy. After serving multiple jail and prison terms, he finally earned himself a life sentence under the Three Strikes Law. Yancy spoke about overcoming low self-esteem and the power of self-confidence.

“‘You will never amount to anything.’ ‘You will never be anything in life but a loser.’ Those words, those statements, were said to me so many times, so much, I actually started to believe it to the heart,” Yancy said.

While in another prison, he ended up in Administrative Segregation (Ad-Seg). There, he had a spiritual awakening and developed a “no quit” attitude. Yancy began accomplishing educational achievements, including passing the high school equivalency exam.

“This is something that cannot be taken away,” Philip Leonida, one of the teachers, told the graduates. “There’s strength in vulnerability. In order to learn, you must admit that you do not know. You have learned to grow from your mistakes. Your mistakes are not your downfalls, but the stepping stones for your greatness.”

Leonida has taught in California prisons for 13 years. He teaches adult basic education as well as life skills.

“I love it, even though it can be frustrating at times,” Leonida said. “I do my best to balance the fact that these are grown men with our institutional needs.”

“I try to incorporate the same kind of situations that they’d encounter on the streets, like going to the DMV, but you can’t get there because the bus broke down or you get to the DMV and clerk is rude.”

Leonida says he holds incarcerated students to very high standards, “Sometimes, they push back. However, I continue to push them under the philosophy of Martin Luther King, Jr.

“Be aware of the soft bigotry of low expectations.”

Other teachers commented on the graduation.

Anita Sufi has been an educator for 28 years and has taught in prison for 10 years.

Referring to how the teachers feel about their job, she cited James Baldwin:

“You cannot be taught by someone who despises you.”

“We all care about our students as a part of doing our jobs in social justice,” Sufi said. “Seeing the men graduate gives me hope because the education that they are getting in here is the same that is provided out there.”

Educator D. Searle has her classroom walls decorated with copies of GED and high school equivalency diplomas as well as mathematical formulas and social justice posters.

“I see good things coming from the education department,” Searle said. “The students come into the classroom motivated to get their diplomas. That’s a change from before, when students used to ask, ‘Why am I in education?’ Now, they want to be here. That comes from the teachers’ teamwork.”

Searle and other teachers meet regularly to discuss curriculum development and better ways to deliver quality education to their students. 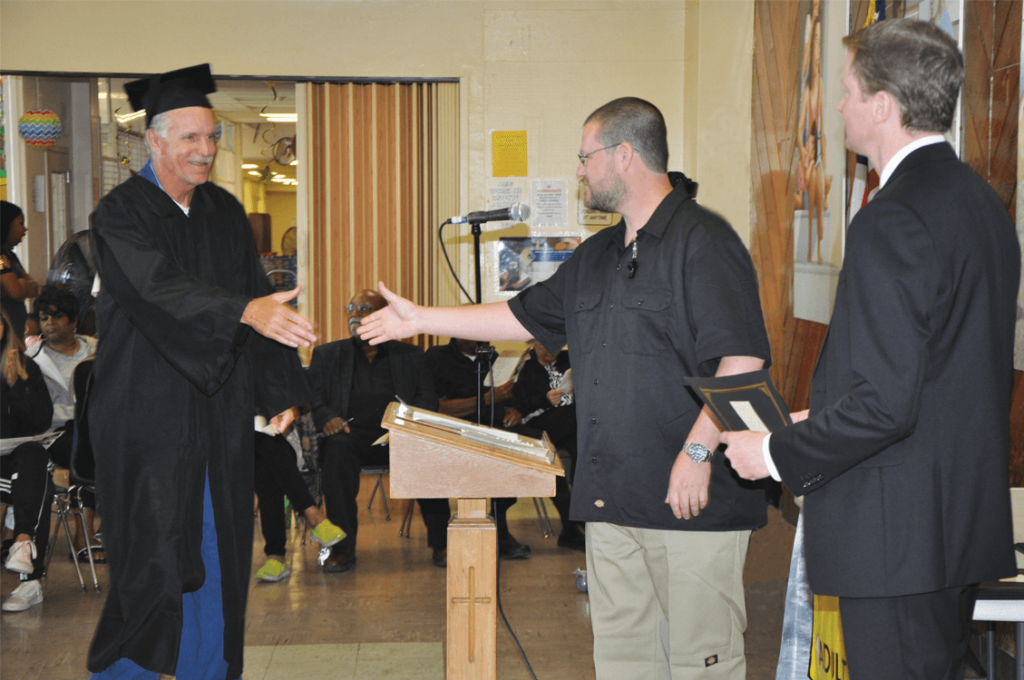 Searle has been a teacher for more than 30 years, including 20 years in the public schools and 10 years at San Quentin.

Note :Behind the scenes, operating the sound equipment is Stephen Pascascio:

“It brings a joy in my life to see the smiles on my fellow men-in-blue,” Pascascio said. “Having their families here and giving back to my community and getting the support from the teachers and administration gives me joy.”

“It’s my way of showing the veterans of San Quentin care about the community,” Johnson said. The Veterans Group of San Quentin began presenting the colors at graduations in 1999.