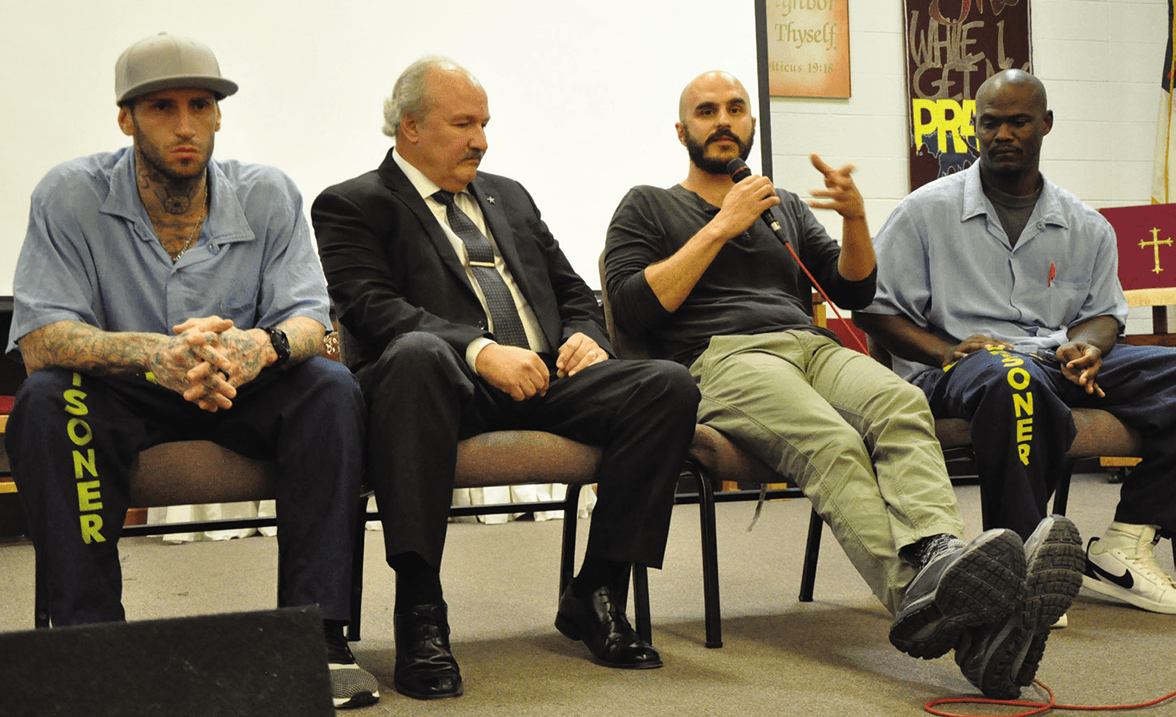 The documentary, produced by NFL icons Brady and Strahan (who didn’t attend but sent best wishes) along with Gotham Chopra, Chris Uttwiller, Gattanella and Giselle Parets, makes the case that sports is a religion.

“Baseball is the religion; it is the faith,” said Chopra, executive producer and creator of the series. “Sports is universal. Every religion, every race, every lifestyle—baseball brings them all together.”

The Thomas Leach-directed documentary is told through a glimpse into the lives of four characters: John “Dunnie” Windham, Branden Riddle-Terrel, Chris “Stretch” Rich and Mutch.

Smith, who resurrected the baseball program when he was a minister at San Quentin, provided perspective.

“My job as a minister was to give guys a sense of hope, sense of light, and baseball does that,” Smith said. “Big games transform people. It gives you a sense of hope that you no longer have to be what others think of you.”

Windham, Riddle-Terrel and Rich shared their crimes, remorse and how baseball played a role in helping them cope and better themselves.

The movie opens with SQ baseball sponsor Elliot Smith warning a visiting team about the rules for entering a prison. One: you can’t give or accept anything from an incarcerated person and two: the staff do not negotiate for the return of hostages.

From there, the film avoids the typical “Lockup” sensationalism by digging into past issues that contributed to the crimes committed and the rehabilitation.

Windham’s journey from troubled latch-key kid to aiding in a homicide focuses on how baseball helped him interact with folks from all walks of life.

Windham walks the viewers around a yard self-segregated by race and onto a baseball diamond, where all races play together as one team.

“Baseball is my way of healing,” Windham, a power hitter, said in the film. “You want us out on that field because it builds community.”

His sister talked about growth.

“He was 18 when it happened,” Kathy Williams said. “He was a child, but he grew into this amazing man behind bars.”

Riddle-Terrel shared the night he broke his mother and father’s heart by going into a drug-and-alcohol-induced blackout during which he killed his best friend. He was subsequently incarcerated for manslaughter.

“When he played baseball, he was a sophomore playing with the seniors,” Branden’s dad, Doug Joerger, said. “He was that good. He might have had a chance at a higher level.”

Now Riddle-Terrel, pitches for the SQ A’s as he pays for his mistakes.

Chris “Stretch” Rich pitched for the San Quentin baseball program before he paroled after serving 21 years. His brother, a police chief, supported him the whole time.

In society, C. Rich went astray after a freak accident cracked his chin and destroyed a promising baseball career. In prison, he found light on the diamond.

Mutch, the other formerly incarcerated man featured, served 41 years in prison on a seven-to-life sentence. For 38 of those years, he represented incarcerated people before the administration as a member of the Inmate Advisory Board.

Mutch still fights for incarcerated people as the director of advocacy for the Prison Reentry Network.

While he didn’t play baseball, he said he did help to get the field put in through bringing Metallica into the prison. The rock band donated $10,000 to make it happen.

In the film, Mutch provided a philosophical view by comparing prison to Plato’s Allegory of the Cave.

He attended the film screening in the Protestant Chapel and participated in a question-and-answer session along with Windham, Riddle-Terrel and Producer Mike Gattanella.

“From the start everybody was friendly and open,” Gattanella said. “And I’m like, all right, who’s trying to play me? I became comfortable after a couple of days. Once we talked to John and Branden, I knew it was going to be awesome. This is my favorite thing that I put together. I never expected that.”

Riddle-Terrel was asked how it felt to see how much he let his dad down.

“It was a reminder of the let down and how much he really does love me and what he thought of me as a kid,” Riddle-Terrel said. “We still have a future ahead of us and just because we let someone down doesn’t mean they stay down forever.”

Mike Adam asked Mutch what motivated him to be part of the documentary, even though he didn’t play baseball.

“The walls don’t just keep people in; they keep people out,” Mutch said “The best thing you can do as a prisoner is throw tethers over the wall. The more people that see the lives locked up in prison, the more people will ask about the things being done in their name.

“I was always eager to have people come in. I believe in sports programs. I never bought into the boundaries. In 1975 there were a lot of boundaries, until baseball crossed those boundaries.”

The question came up as to what wasn’t shown in the one-hour film.

“The life I was living, I deserved a life sentence,” said Riddle-Terrel, who is serving 11 years. “What wasn’t shown in this story is: you have thousands of inmates in the state of California that are doing life for something they should have been home for.”

Someone asked how the producers kept from sensationalizing the film.

“We had an amazing leader and partner, DirecTV, that allowed us to tell the show,” Co-Executive Producer Parets said. “Sam (Robinson) and Bill Sessa really paved the way; we never thought we would be able to have a screening inside San Quentin.”

Uttwiller added, “Being able to tell authentic stories—we can only do that when people are authentic with us. You guys really opened up in a world you might be more guarded in. That took strength and vulnerability. We use sports as a background. Interesting stories is the tapestry for it.”

After seeing the movie, SQ baseball player Trevor Bird approached a producer and said, “Seeing film of the Pirates playing at San Quentin from another prison kept me walking the straight and narrow for the possibility of getting to San Quentin to play baseball. Now the possibility has become a reality, and seeing this film brought it full circle.”

Windham revealed that he saw the film just in time. The next day, he was shipped to Jamestown, a minimum-security prison, which he views as one step closer to home.

Gattanella said, “My biggest fear was putting together something that wasn’t honest. It felt like a responsibility…it’s having an effect. It’s at a film festival in Montana. I don’t care if it wins; that you guys liked it is all that matters.”

The Religion of Sports airs on DirecTV Audience Network and, internationally, on Netflix.