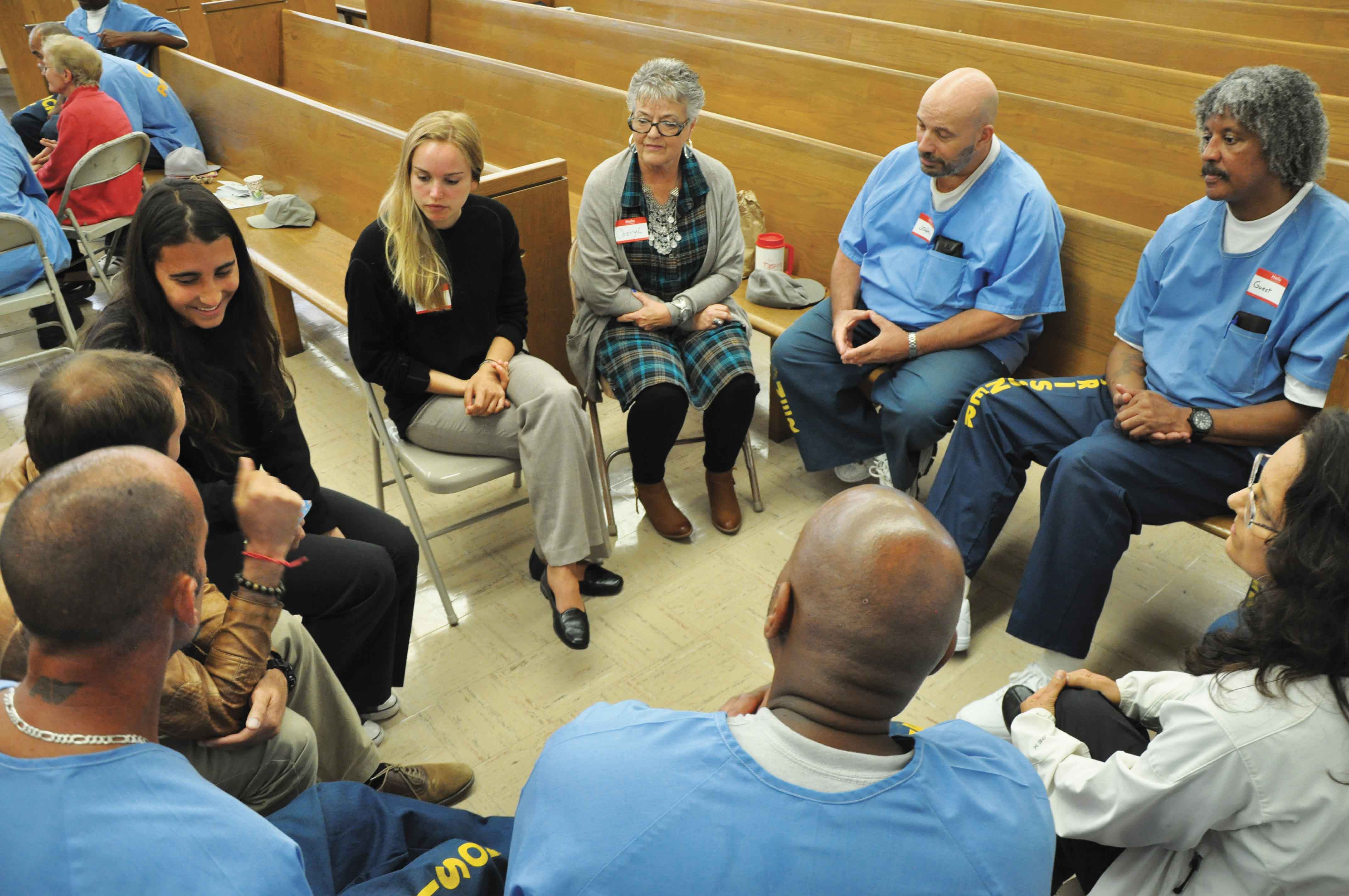 Cheryl Ward-Keiser (third from left) at the Restorative Justice symposium

You can restore broken relationships no matter how shattered they are, several speakers said at a Restorative Justice forum at San Quentin prison.

The first speaker, Robin Petersen, with faith that the Divine would guide her on what to say, stood before a podium with a statue representing Jesus hanging from a plain cross between two 42-inch flat-screens in the background, and addressed the crowd of guests and incarcerated people.

Petersen, inside a men’s prison for the first time, talked on the theme of the March 3 event—restoring relationships. She candidly revealed her past of drug addiction and prostitution in the Tenderloin section of San Francisco and then the eventual restoration of herself.

“The first relationship I had to restore was with myself,” the 61-year-old said. “I got clean at 51. Now my youngest son is a trans-man, 31, getting his masters in social work. My oldest, 37, is in college, too. I am really proud that I have instilled the need to work for social change with my youngest.”

She said she became a prostitute so she could use drugs. She hit her lowest point at 40, when her father died, she was diagnosed with Hepatitis C 10 years before there was a cure, and she lost her body-piercing business in San Rafael, all within three days.

She believed that getting high was the best she would get from life. Then she heard a voice.

“I believe my higher power talked to me, saying ‘Robin your life is worth more than this,’” Petersen said.

Thereafter, she cleaned up but still had to repair the collateral damage. Petersen, with the pain still present, shared how her choices affected her sons.

Her youngest son said, “‘I’m really mad at you,’” Petersen said. “I gave him space to be angry, the space to tell me about the trauma and pain that I put him through. I was able to tell him that ‘There isn’t a day that goes by that I don’t feel bad about that stuff.’”

“There are people here doing work I don’t see on the outside. They’re not scary. What I see is real people”

Petersen repaired her relationship. She thanks the Affordable Care Act for beating Hepatitis C. And she turned addiction around to become an alcohol and drug case manager at a methadone clinic.

Inside Restorative Justice (RJ) member Miguel Sifuentes spoke about the difficulties of restoring a relationship with a father who abused him and his mother.

“I wasn’t thinking about restorative justice, I wanted him to apologize or else,” Sifuentes said. “More recently, being in restorative justice, I have been trying to figure out how to have a conversation with him. After meeting with pops in the visiting room, I said, ‘Oh my God, I see why you need a facilitator.’”

“I thought we were going to have this beautiful moment, walking off arm-in-arm into the sunset,” Sifuentes said. “It’s work. To his credit, he comes to do it.”

When RJ volunteer Gwen Gunheim first recruited Petersen as a guest speaker, she told her the theme would be on how men have mistreated women. Petersen took a moment to speak on that topic as well and so did RJ sponsor Danica Rodarmel.

“I’ve struggled with a lot of issues with men, being objectified and taken advantage of,” Petersen said. “I’ve worked a lot on understanding that and what my part in it is. I understand that we are all just traumatized human beings just trying to do the best with what we got.”

Rodarmel, taking the podium for the first time since facilitating restorative justice for three and a half years, spoke on the negative impact, even if unintended, of “catcalling.”

“Walking down the street in New York is exhausting,” Rodarmel said. “You might be catcalled 10 times. For a lot of people who identify as female, that’s a lot of people commenting on how they look. People ask you to marry them. They expect you to be thankful for the proposal. They get mad at you if you don’t like the compliment. They’re making these comments because they don’t know better, they don’t know they are hurting somebody. Some may just be jerks, but we still need to hold space for them.”

Rodarmel said she didn’t know what the solution was except educating men.

Inside RJ facilitator Darnell “Mo” Washington asked every man who ever catcalled a woman to stand up. About 70 stood.

Then Washington asked each man to apologize. Every man standing turned to any of the 40 women, including Berkeley law students, closest to him and said, “I’m sorry.”

The attendance at San Quentin seemed to suggest RJ was helping repair relations between society and incarcerated men. Two female volunteers brought their families to the symposium.

Susan Yarian, volunteer Francesca’s mother, said she came because, “I was interested in what she was doing. I didn’t know what RJ was. I started hearing more about it.”

“From the first time I came (two years ago), this program had a really big impact on me,” Freidman said. “There’s not a lot of space in the outside world where people are working on things in a connected way. To see that and getting to be a part of it and seeing how much work everyone is doing on themselves, it inspires me to do the work in my life.

“It never occurred to me that I could bring my family until I saw others. What an amazing thing to be able to share this program that had a really big impact on me.”