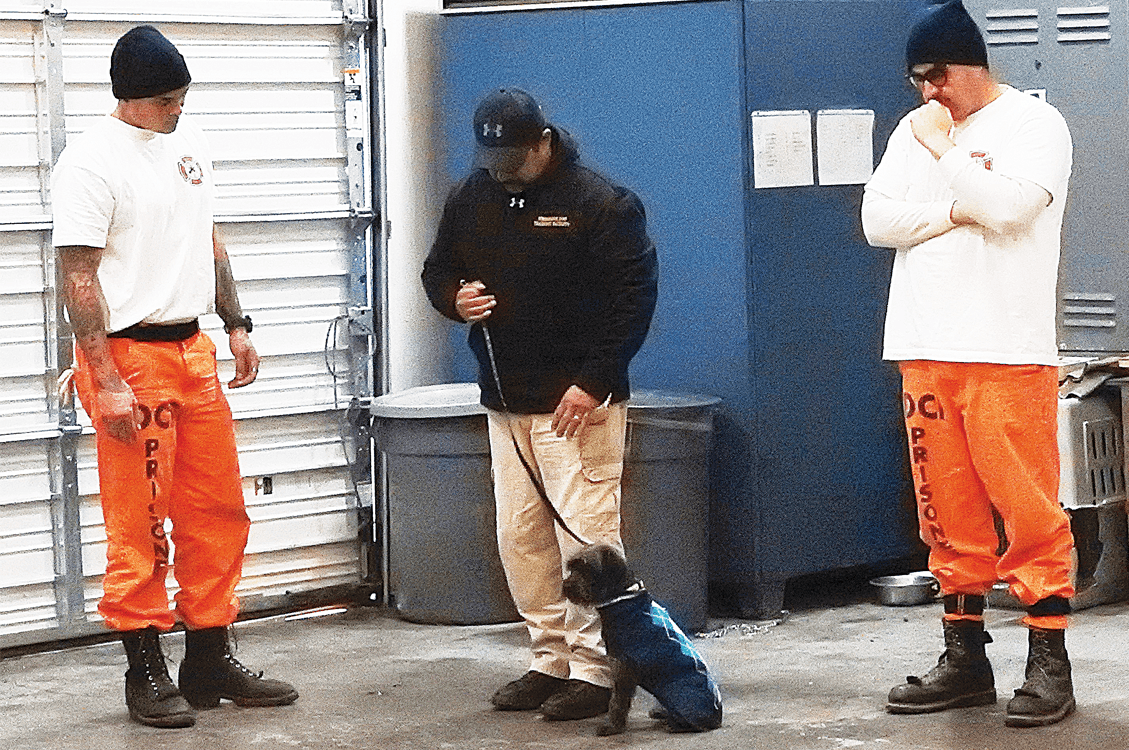 Trainer showing inmate the handling of a pup

The Pups on Parole program at California Correctional Center (CCC) celebrated its 10th anniversary, with 478 dogs adopted so far.

The program partners dogs with firefighting inmates. Seven dogs are allowed in the program at a time. However, the program is not intended to benefit only the cuddly canines, according to Lassen County Times.

“I love this program. In my opinion, this is one of the most rehabilitative programs California Department of Corrections has to offer,” said inmate Randy Elson.

When not fighting fires in the area, Elson spends his time working with Ruby, a 2-year-old dog.

“Every time I come back, no matter how long I’ve been gone, she’s always happy to see me,” said Elson.

Rikki Meier, the CCC Pups on Parole liaison, helped the program grow. She has assisted in bringing in dog trainers to help the handlers learn how to best interact with and train the pups for adoption, reported the Lassen County Times.

Inmate Zack Gleason also loves his time working with the Pups on Parole program. He handles a yellow lab/husky mix named Duke, who has a knack for the brand-new agility course.

Duke was a little distracted by all the friendly faces. He showed great skills jumping through hoops and listening to his handler in front of attendees at the program’s 10th anniversary event in July.

Another inmate, Gabriel Martinez, spoke favorably of the program. He used his skills in wood burning to create the winning barn medallion in 18-22 hours for the Lassen County Arts Council’s fair contest.

“I love it; we all love it here being handlers; it gives us a great sense of responsibility. When we see them go, it’s a little bittersweet,” said Martinez.

Meier said she hopes to lure in more participants to the program, and now the inmates who participate receive Rehabilitative Achievement Credits for their work.

“For me, it’s seeing a dog that’s been running the streets, or in a bad situation coming to the program (and changing) in two days. These handlers completely change the dog’s personality,” said Pups on Parole Coordinator Vicky Reinsel.

Celebrating 10 years of the program, handlers and those involved enjoyed cake and ice cream and reveled in the company of the seven pups currently looking and waiting for the perfect family, reported the Lassen County Times .

Pups on Parole is run by Lassen Humane Society and CCC and coordinates with Lassen County Animal Shelter.

“Love this program, we adopted Rocco into our family in February of this year,” said one message left on the Lassen County Times website. “We can’t imagine not having him as a part of the family. Thank you so much.”