Having a parent behind bars was the theme of San Quentin’s inaugural Walk for the Next Generation, which brought to light stories of pain, solidarity, and struggle.

The Sept. 10 event welcomed more than 45 guests wearing white and green Project Avary T-shirts with its blossom tree trademark. They mingled on the Lower Yard with more than 200 prisoners, sporting green rubber bracelets in solidarity. Project Avary provides kids ages 8-11, a 10-year program of support while their parents are incarcerated.

“You could see that a lot of the men here have come from the same background as the kids we serve,” said Amy DeLeon, Project Avary’s Director of Communication and Resources. “You could see that the men are afraid of what might happen with the future of their own kids.

“You could feel the sense of solidarity and unity; everybody with no judgments of each other. This was a special collaboration with the men in blue and it gives purpose to this work,” continued DeLeon.

The crowd listened to poems, songs, and speeches before they took to the dirt and gravel track for the march. 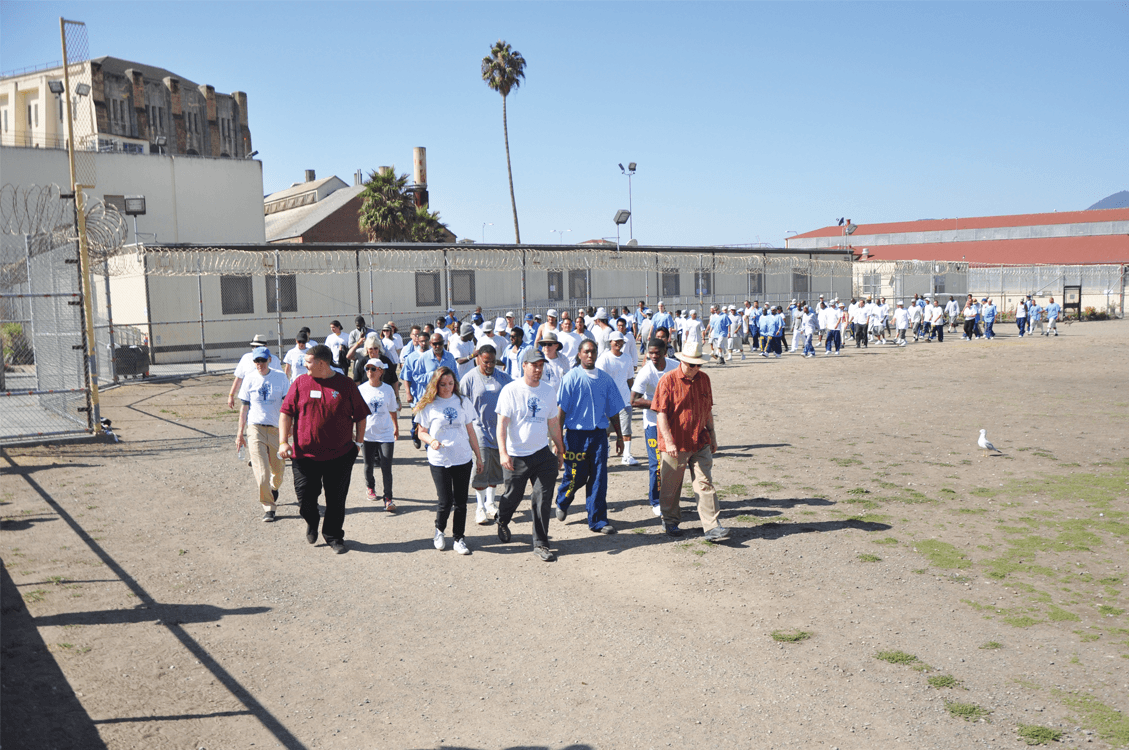 Ambrosia Phoummathep, 22, who has been in Project Avary since age 8 and now works as a coordinator, read a poem to the audience written by Allison, 16, about her father in prison.

“Nothing is easy. Driving hours to see him for two. Having to say goodbye. Not getting to say I love you back, because his time ran out. Not knowing what’s going on or why he’s stuck in this place with these scary people,” read Phoummathep.

“With this event you can see both sides of the effects of prison life on the kids and the parents,” said Phoummathep. “It’s pain on top of pain and we have to end it.”

Sabrina Garcia, 22, and Fredrick Williams, 21, both Avary counselors, know first-hand what its like to have fathers serving time in San Quentin.

Garcia’s father Nick Garcia (brother of former San Quentin News Editor in Chief Arnulfo T. Garcia) was paroled recently after serving almost 40 years. Sabrina was conceived during a family visit in prison and had to build a relationship with her father through prison visiting rooms, where a lot of Nick’s friends and other prison families watched her grow up.

She entered Project Avary at age eight, and now mentors the next generation of kids coming through the program. She credits Avary for providing a safe place to connect to other kids in the same situation.

She even found the love of her life, an Avary co-worker, and they are married now.

“I’m proud to have her as a part of our family,” said John Atkins, Sabrina’s father-in-law and Avary board member. “I march for Project Avary, the men at San Quentin, and the Garcia family.”

Williams, another Avary counselor, said his relationship with his father is a little more strained. His mother Jody married his father at San Quentin years ago and the couple is now divorced. The father is currently housed in another prison.

Williams arrived at Avary at age eight, and graduated into a counselor.

“I learn how to be a man at Project Avary,” said Williams. “It taught me to be responsible, something my father wasn’t. He has been in prison for a while and to me he hasn’t grown. It’s not about what you say, it’s about action.

“That’s why I strive to give to others, to help patch their wounds and ease their pain,” continued Williams.

Jody Williams, Frederick’s mother, warned men who were listening, “Don’t be selfish when it comes to your kids. I don’t care if you write 500 letters and they don’t write back, you keep writing. You don’t know what life has been like for them.”

After hearing from the Project Avary alumni, the men in blue took to the stage.

“You see my father never bothered to stay in my life; despite the few years I had with him as a little tyke, he soon disappeared and became out of sight and there I go having to learn how to ride a bike and fly a kite on my own…”

Jason Jones and Jesse James Smith wove a thought-provoking tale of having a parent in prison and falling into the same life in their rap song “Keep Your Head Up.”

Smith’s slender frame bounced up and down, on the narrow stage as he delivered lyrics such as “I miss my daddy so much. I miss him so much, but he kept going back to jail and I kept growing up.”

Gino Sevacos’ reggae-inspired song “Diversity” was an answer to the tragic events of racial strife throughout the nation.

“Diversity is what we like about our country,” sang Sevacos. “Diversity, Red, Black and White, Brown, Green and everything in between.

“Invest in the future of the youth; you already know what to do. Help them succeed, give them a hand, show them you love them because you can,” continued Sevacos.

The march was hosted by San Quentin’s KID C.A.T. program, a juvenile offender rehabilitative group. The group raised $675 for Project Avary through $5 donations.

“Project Avary was started here when (then) Chaplain Earl Smith’s wife saw kids waiting outside the visiting room and said ‘I wonder what we can do for them,’” said Zach Whelan, Project Executive Director. “Twenty years later we are back. The men have taken their hard-earned money to contribute. They have put on this incredible walk and that’s powerful stuff.”

Breaking the cycle of incarceration with music from behind prison walls

Law enforcement and prisoners come together in Barbershop Dialogue