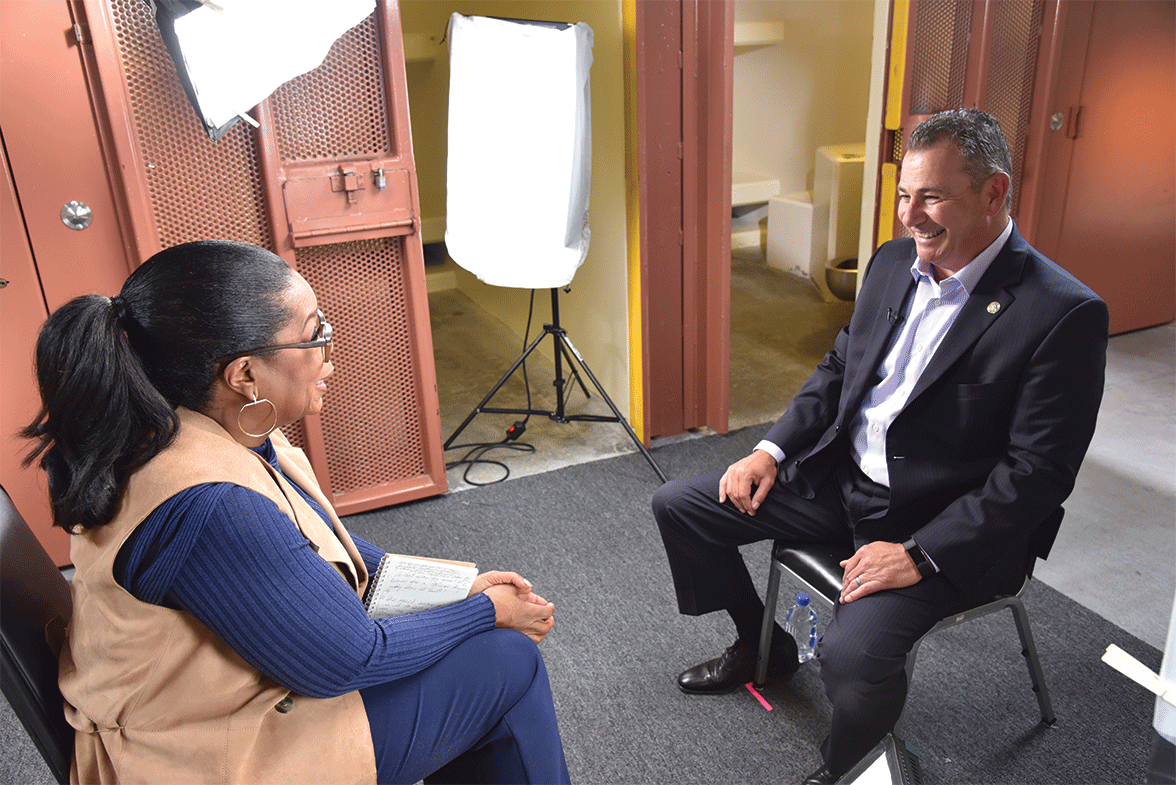 Oprah entered the notorious Pelican Bay State Prison Security Housing Unit (SHU) to report on its changing conditions. She also debuted Released, a multi-part series on her cable network, OWN.

The six-part series follows the lives of six Black men and women as they reintegrate back into society. One of those featured is a former San Quentin inmate who once had a life sentence under the Three Strikes Law.

In the Released series San Quentin’s own Kevin Carr was featured on the program and told his story of emerging from California Department of Corrections and Rehabilitation (CDCR) after 19 years.

Carr was convicted of stealing $156 in children’s clothing and received a 25-to-life sentence under California’s Three Strikes Law. He regained his freedom thanks to a series of state propositions reducing the prison terms of non-violent offenders.

A judge re-sentenced Carr to 21 years. Carr spent his time in prison seeking to improve himself. While Carr was at San Quentin, he participated in numerous programs: a Christian fellowship group called Graced Out Ministries; Project REACH, a literacy program geared toward at-risk youth; and Victim Offender Education Group (VOEG), a program that puts crime victims and offenders together to seek healing.

“I’ll never forget back in 1997 when my judge sentenced me. I felt like my life was over,” Carr said on camera in the first Released episode. “Now, I’m coming into a new world that I’m foreign to because so many things have changed. I feel like I’m at a disadvantage.”

In an interview by phone with San Quentin News, Carr said he is currently working a union job. He credits San Quentin’s CTE labor training course for helping him find a job when he got out of prison.

“It’s been liberating,” Carr said. “I have a sense of freedom. No other words for it. My morals and values have changed drastically.

“Being home, just being able to buy coffee, pay my rent, take my grandson to the beach, I’ve learned how to be grateful for the little things. It’s liberating. I don’t need a whole lot to be happy,” Carr concluded.

As Oprah entered Pelican Bay, she wore her hair pulled back, signature wide-rimmed glasses and a green anti-stabbing vest as she walked and talked to Scott Kernan, the secretary of the CDCR.

The two discussed the SHU isolation unit, which some critics say constitutes torture. The two chatted about the effectiveness of the controversial segregated “supermax” prison over the years and the current reform movement to limit the practice of denying prisoners human contact.

Critics say the practice can cause mental illness, according to a CBS News article.

“How has your own personal perception of what it means to be an inmate—a prisoner—how has that changed?” Oprah asked Kernan.

Kernan replied, “When I first came in, that person was the enemy. Now, 35 years later, I don’t view the inmates as my enemy. They’re people. They’re all coming out to be our neighbors.

“Why wouldn’t we spend the resources and create an environment, where … when they come out, they’re better people than when they got here? I just think it makes all the sense in the world. It’s common sense,” Kernan added.

After Oprah toured the SHU, Kernan helped remove her protective vest, and she was taken into the lower-security unit, where SHU pods had been reconfigured to have open cell doors and to allow prisoners to move around freely.

The transformation inside Pelican Bay came after California settled a class action lawsuit with the SHU prisoners. The ruling meant that CDCR could no longer confine prisoners in the SHU indefinitely. The suit also reformed the practice of “validating” a prisoner as a gang-member, thus making him a candidate for the SHU.

The Released series grew out of an Oprah interview with author and former prisoner Shaka Senghor. Senghor, who spent 19 years in prison for second-degree murder after a drug deal went wrong, reported a Huffington Post article.

Senghor’s book Writing My Wrongs: Life, Death, and Redemption in an American Prison moved Winfrey and helped her create this project to tell similar stories of redemption and refuge, said the Huffington Post article.

“I think narratives [can allow for] prison reform … I mean, if you think about how we landed in this mess in the first place, it was based on the stories that were told about inner city kids being super predators and irredeemable,” Senghor said in another interview with the Huffington Post.

“So, if those negative narratives can shape policy in a way that’s harmful, then it only leads me to believe that the more positive narratives we have―the more honest, transparent [and] open human narratives that we’re sharing―the more likely we are to shape policy that honors people’s humanity,” added Senghor, who eventually became a consulting producer on the series.