San Quentin State Prison, known by its warden, Ron Davis, to be “The Titan of Rehabilitation,” one-upped itself with a spirited collaboration. Featured were incarcerated musicians sharing the stage with a gospel duo made up of a retired associate warden and a prison staffer, local Bay Area musicians, and a guitar/violin duo from Sacramento. 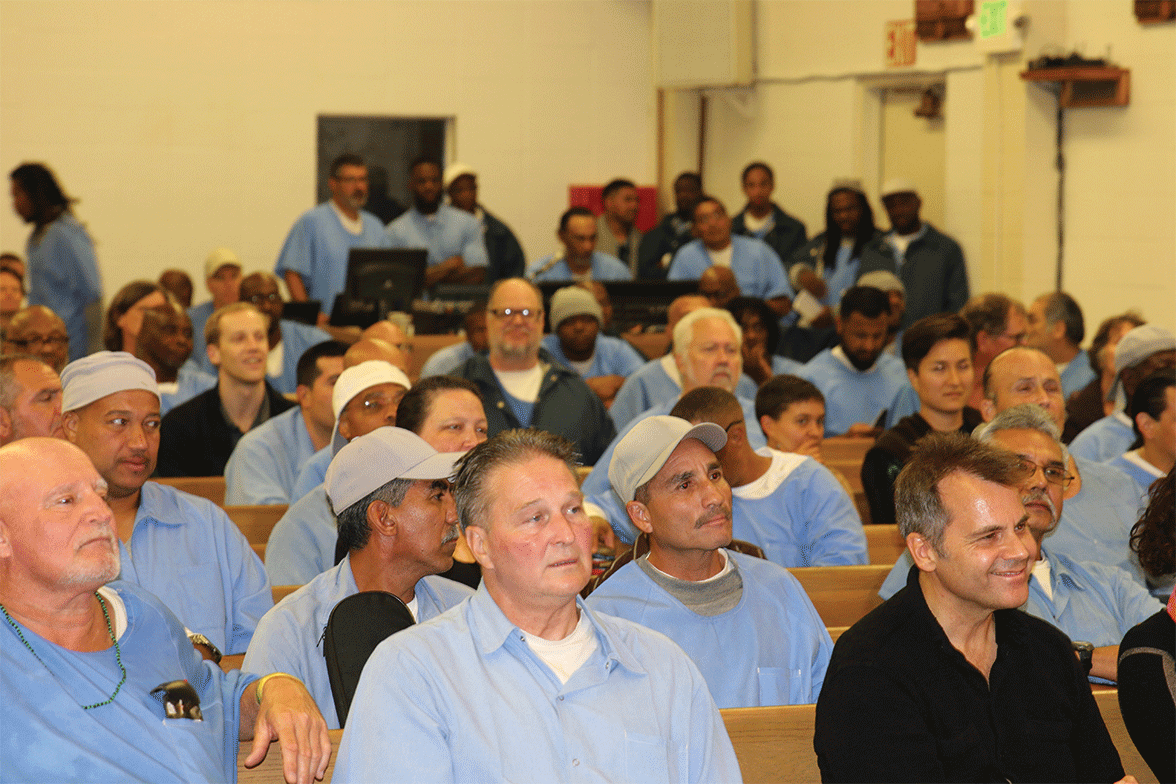 There was standing-room only for the nearly 350 people stuffed in the prison’s Catholic Chapel on Nov. 10.

“I believe in the healing power of music,” said Lisa Starbird, a representative of Bread and Roses Presents.

Starbird co-hosted the event with San Quentin Radio producer, Louis A. Scott, winner of a 2017 Society of Professional Journalists award for his radio productions coming from the prison’s media department. 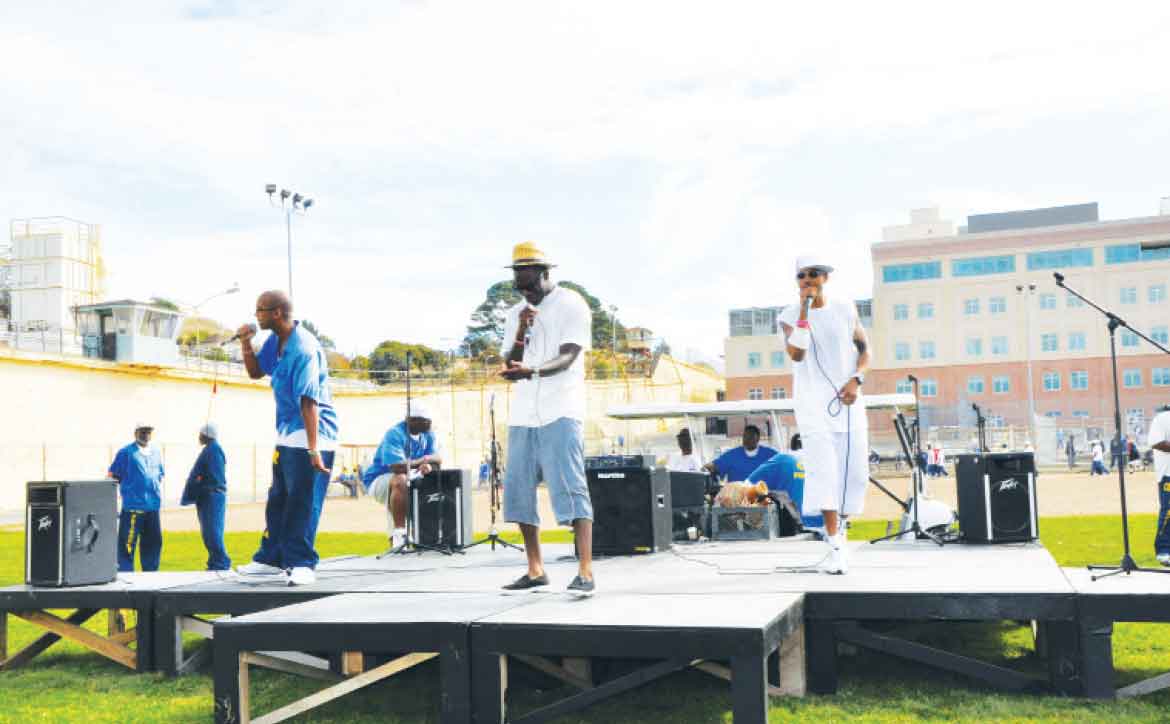 There were whoops and hollers coming from the audience as Jassy’s hip-hop lyrics to Khokhobashvili’s piercing violin strokes had heads bobbing with hands in the air.

Most of the performances had the audience of San Francisco Bay Area community members, inmates and prison staff on their feet.

Starbird got the audience into the right mood when she sang Let it Shine.

Let it Shine was rhythmic and had the audience clapping with a sing-along chorus “Big, Bright, Brilliant, Beam of Radiant Light Shine.”

The incarcerated men had plenty of support by the administration, resulting in the numerous standing ovations.

“I always had a feel for music. That’s why I got into the music program here,” said the warden’s assistant, Raphaele Casale.

Casale said when she first took over the program,  she noticed one of the bands was not diversified. However, thnigs changed when inmate Darrly Farris took on a leadership role.

“He encouraged everyone to bring the music they liked,” Casale said. “He has become a well-rounded musician, and it’s been a great pleasure working with him.” 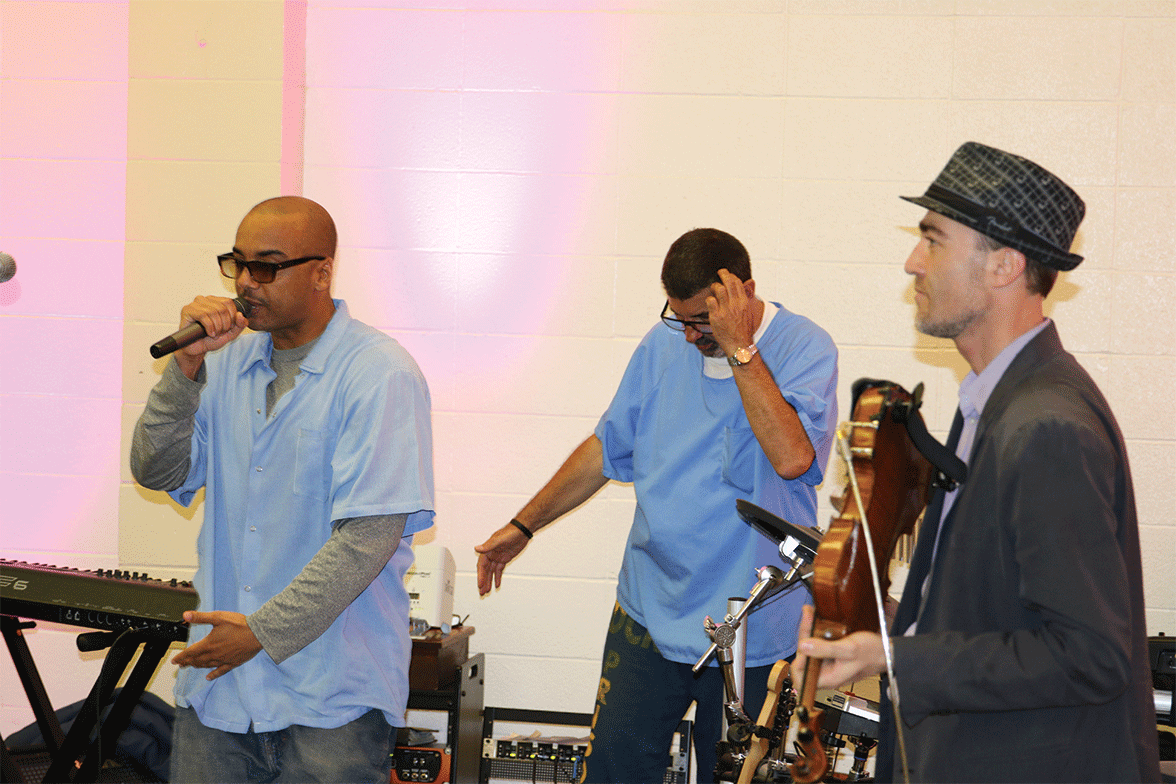 And The Show Went On

Young and old, Black, White, Mexican and others as well as volunteers and prison staffers enjoyed all genre of music — from hip-hop to folk and country to gospel and Brazilian jazz.

The jazzy sound brought a distinct whoop from the Hispanic inmates who recognized the style of music as the violinist whined and cried to the steady beat of the guitar’s chopping and smooth lyrics.

“This right here is music,” Ferraz said. “It’s not the fame. It’s just music,” adding, “It has been a pleasure. This is a place that is peaceful and full of love.”

The two have been performing together for about 10 years.

The hip-hop performance by Jason “Alias” Jones, Antwan “Banks” Williams, and Leonte “AV” Amos was a history lesson on oppression and a motivational piece about moving forward in spite of being oppressed — They keep steppin on me, but you gotta just keep steppin’.

Not to be outdone, hip-hop artist Jessie “JJ” James performed Dear Mr. President. The lyrics come from a letter he wished to send to President Donald J. Trump, asking if he cares about the poor.

JJ was joined on the stage by Alias, Banks, and AV, followed by several other inmates dancing in the center aisle. One inmate walked the aisle passing out blank envelopes to send to the president.

Mark Jeffery has been volunteering at San Quentin for about five years. He performed The Devil’s Door and Orphan Girl with vocalist Margot Biehle. 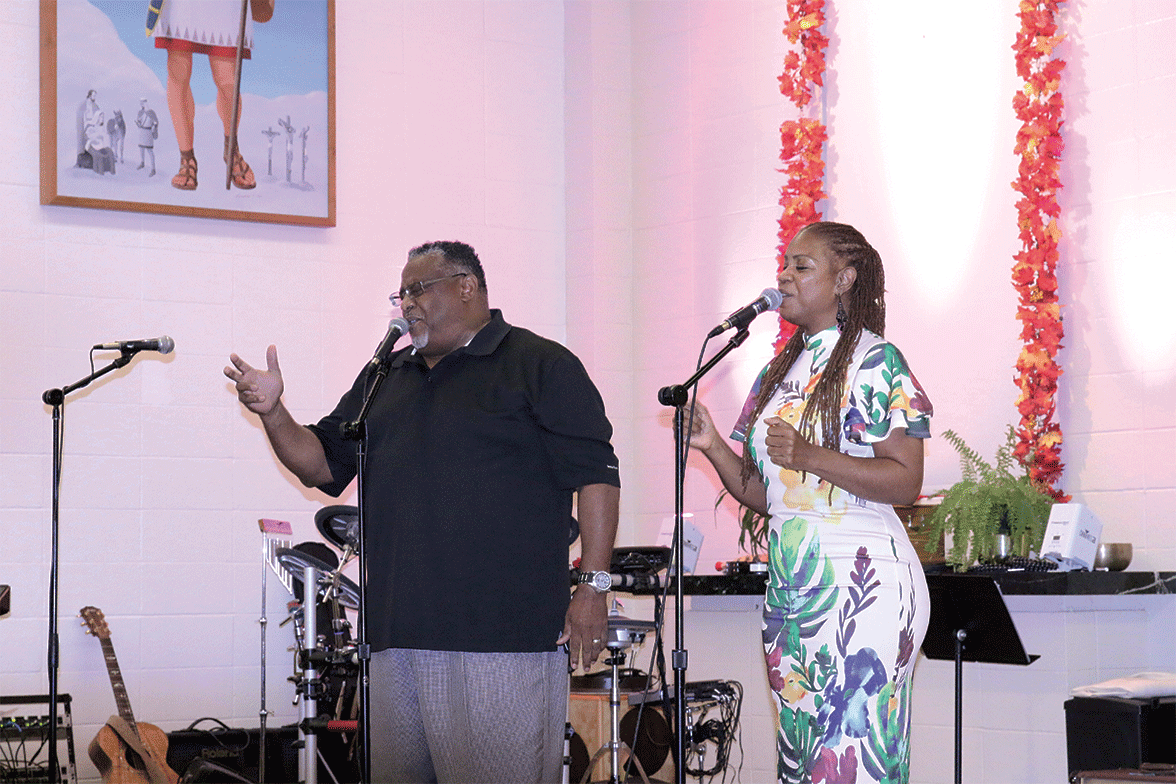 “The Devil’s Door goes to a dark place, but it comes back to the light,” Jeffery said. “You can feed the devil or push it away.”

The song has a folksy sound with Jeffery’s twanging guitar and Biehle’s harmonic backup.

Orphan Girl is about “a deep and tortured” song writer, Biehle said. The cracking country song is about a dispirited girl and her life struggles. During the performance, the chapel’s silence set the mood her singing evoked.

Joey Mason and Mike Adams collaborated to perform Renew Me — about hardships and renewing one’s life.

“When Mike brought this song to me, I was in a dark place,” Mason said. “When we need help, you have to ask for it. When he showed me this song, the lyrics just came to me.”

“This is just a snapshot of what heaven is going to look like,” Williams told the audience before singing.

As Williams sang I Love You Jesus, the audience clapped in rhythm and sang along with “Yes, Jesus Loves Me.” 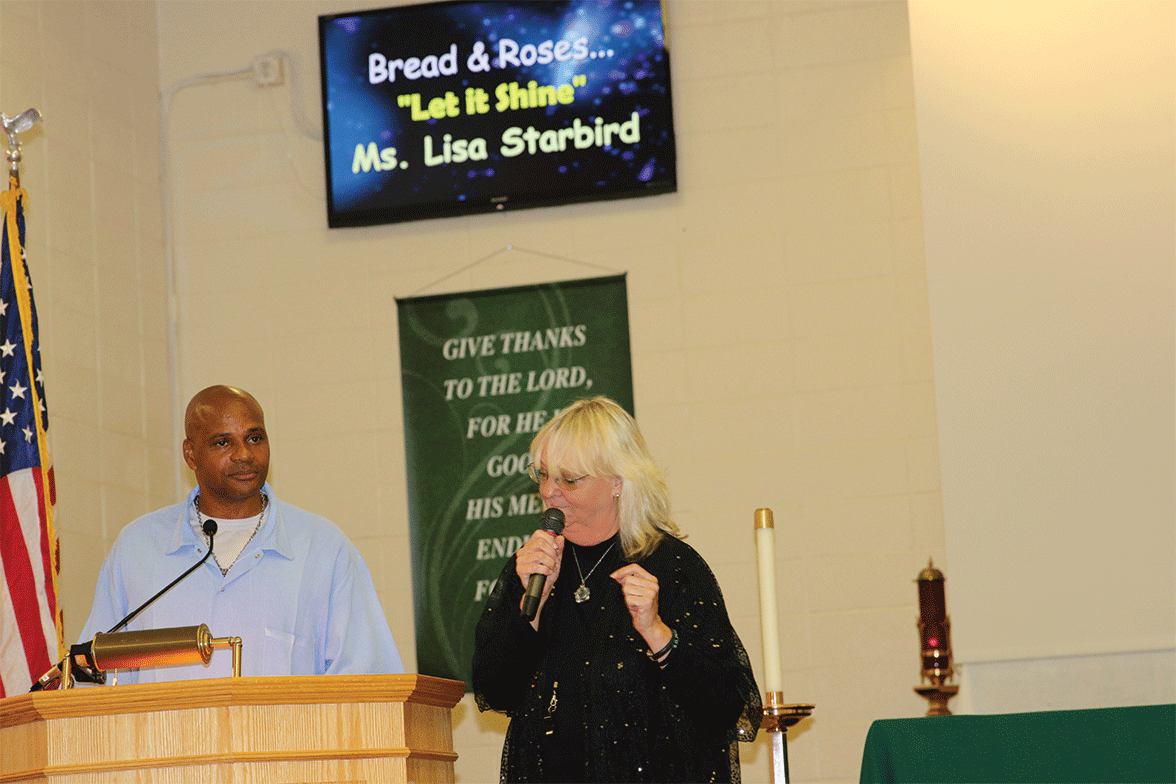 Louis A. Scott and Lisa Starbird hosting the event

Demerson’s saxophone echoed in the chapel, sending the audience to their feet.

“Music is the relaxation in my incarceration,” Spencer said. “Stevie Wonder said it best, ‘It’s a language in itself that everyone can understand.’”

One of the closing acts was I Will Always be Your Friend, an original composed by Richie Morris and accompanied by Spencer and Dwight Krizman.

Closing out with a sing-along was the Mexican Band with Feliz Navidad.