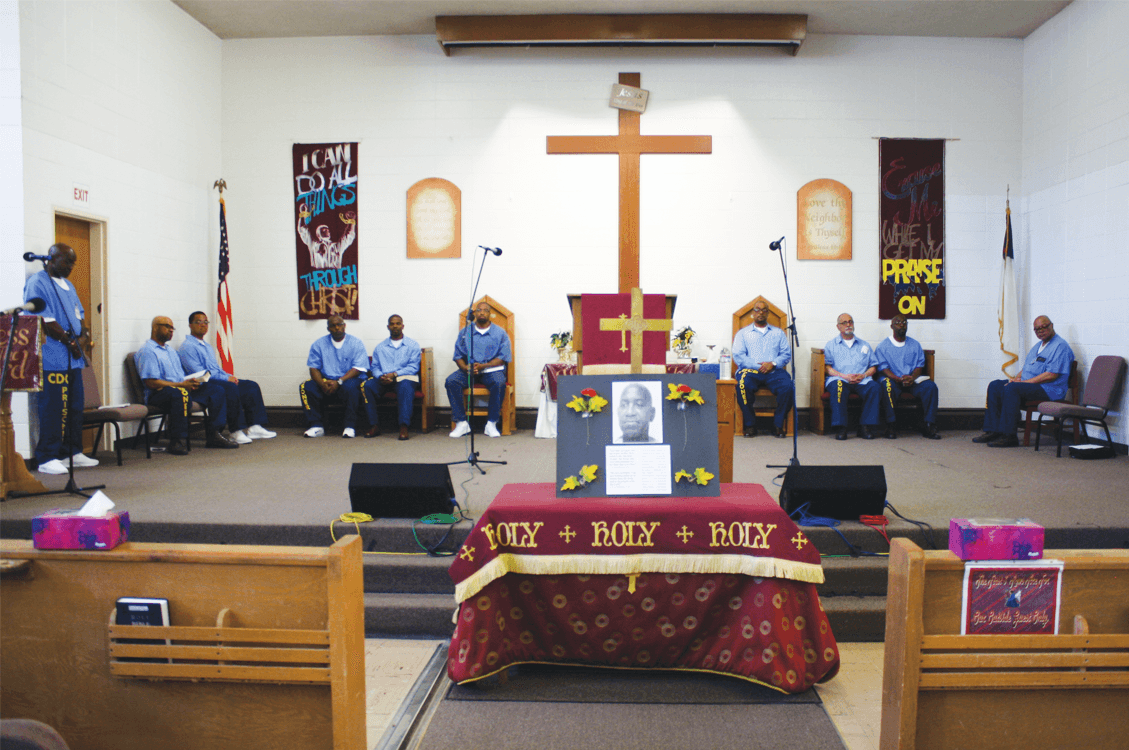 Friends paying tribute to the late Mr. Bowman in the SQ Protestant Chapel

A memorial was held on July 28 in San Quentin’s Protestant Chapel for the late Mose “Mo” Bowman, who passed away on June 13 at the age of 72.

Bowman was remembered as an avid runner and godly person. He drew admiration from all who kept his company and gained friends with each lap he ran around the prison’s Lower Yard.

“He motivated me to get out on the track and get some walking in,” inmate Lenny Rideout said. “Even when he was transitioning, he was still motivating to me.”

Those who made the altar call at his memorial included Chaplain Mardi Ralph-Jackson. All brought testimonies about Bowman’s impact on prison life to an audience of almost 100 people made up of inmates, correctional officers and prison staff.

Scripture was read and praise was given by Trent Capell, Harry Hemphill, Darrly Hill and Chuck Adams as well as the church’s Worship Team.

“He was my neighbor. He was a child of God. I always liked the encouragement and the strength he gave me,” inmate Rudy Morales said. “He’s looking down upon us from those golden arches in heaven.”

Bowman’s memory had inmates talking about their personal relationship with him.

“I met the brother in a strange way — it was behind an argument I was having over a phone,” inmate Paul Comauex said. “He came up to me and told me that I don’t have to get into it behind a phone.”

Comauex said Bowman was a calm and levelheaded person and that got his attention.

“My next encounter with him was behind a cheeseburger,” Comauex said. “I fed him, because of how he talked to me. We need people like him to talk to us.”

The church choir, accompanied by Albert Flagg on keyboard, sang in Bowman’s memory.

“You don’t always meet men like him,” said an inmate from the prison’s dormitory. “Almost every day, I’d stop by the spot, and Charlie and Mo would be there, and we’d just kick it a few minutes. After that I’d head to the law library, but his inspiration would cause me to help someone by giving them a hug or smile all because of that encounter with Mo.”

Valeray Richardson added, “Mo was the type of person who brought light into a dark room. I never saw Mo upset or mad. He brought so much joy to my life. Mo pulled me aside and told me that he loved me, and I felt that.”

“We used to cook together and go to church together,” Terry said. “He was 70 something, running around like a battle axe. We need to stick together in his memory.”