Zachary Norris is working to make a difference with prison reform and the juvenile justice system in Oakland, after his own brush with the law 12 years ago.
Norris, 36, is the Ella Baker Center’s (EBC) new executive director. The center works to advance economic and racial justice for low-income and people of color.
“I just don’t think what we’ve done over the past 40 years has actually made communities safer,” said Norris. He said he wanted his work to move past research “into the realm of tangible change.”
“He really (understands) that the system is supposed to be helping kids and families to move forward in their lives,” said Sue Burrell, staff attorney for the Youth Law Center.
One of Norris’ early tasks was to take families that have members in the juvenile justice system and build a statewide network..
“The goal was to create a unified voice against the juvenile justice system from those that had actually experienced its failure.,” the Juvenile Justice Information Exchange (JJIE) reported.
This work became a key component to the founding of the EBC’s Books Not Bars program, which favors shifting funds from incarceration toward rehabilitation programs.
Norris’ work was the first of its kind to bring family members into the equation, said Burrell. “Before that, it was all advocates and agency people.”
“With allies we’ve been successful, but it’s not by any means over,” said Norris. “Part of how I came to look at how families are treated by justice systems is partly through my own family’s experience and partly through the work we did with Books Not Bars.”
According to the JJIE, Norris is planning three strategies that will promote community safety on a local, state and nationwide level. 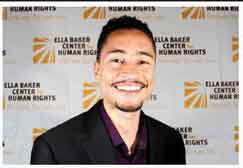 Locally the EBC is in the process of creating a justice hub in Alameda County to assist families navigating through the justice system. It is seeking state legislation that will provide resources for support programs, instead of locking people up. Nationally it is working with Justice for Families and other organizations to develop a “community-driven research project” that will focus on the “multi-generational impact of incarceration on families, from an economic and public health standpoint,” the JJIE reported.
In 2001, Norris was arrested for an act of civil disobedience when he became involved with a protest against the building of a new detention center.
“I had this sense it was all too normal, too normalized,” said Norris.
Three years later, in 2004, Norris came out of the New York University School of Law.
“We have a punishment-based economy that enshrines social exclusion across generations and we need a more supportive economy that helps people do well,” said Norris.
For more information go to http://ellabakercenter.org/about/staff-and-board/zachary-norris