A campaign is under way to restore voting rights to California citizens in prison or on parole.

If passed, the Voting Restoration and Democracy Act of 2018 initiative would stop the practice of taking away the voting rights of those incarcerated or on parole.

“We need the people who are most affected by the laws to have the ability to vote,” said Taina Vargas-Edmond of Initiate Justice. “There are about 180,000 people in the state who are on parole or in prison who don’t have the right to vote. If we had that 180,000 votes, the death penalty would have been defeated.”

Initiate Justice started to survey people in prison to see what initiative they wanted on the 2018 ballot. When feelers from their incarcerated loved ones and friends came in, the suggestions sounded too difficult to achieve. Then voting came up.

“We decided that voting was important, because it was a strategic move,” Vargas-Edmond said. “If we get the voting rights back, we could implement more radical changes.”

Cut 50’s Alex Mallick Williams added, “The United States is one of the only countries in the world that strips a person’s right to vote when they’re incarcerated.”

“Losing your freedom shouldn’t equate to losing your voice”

According to Human Rights Watch, the U.S. “may have the world’s most restrictive criminal disenfranchisement laws.”

Vargas-Edmond noted that the idea of taking away an incarcerated person’s voting rights came from the ancient Greek philosophy that going to prison equaled suffering a civil death. She believes that philosophy is flawed. 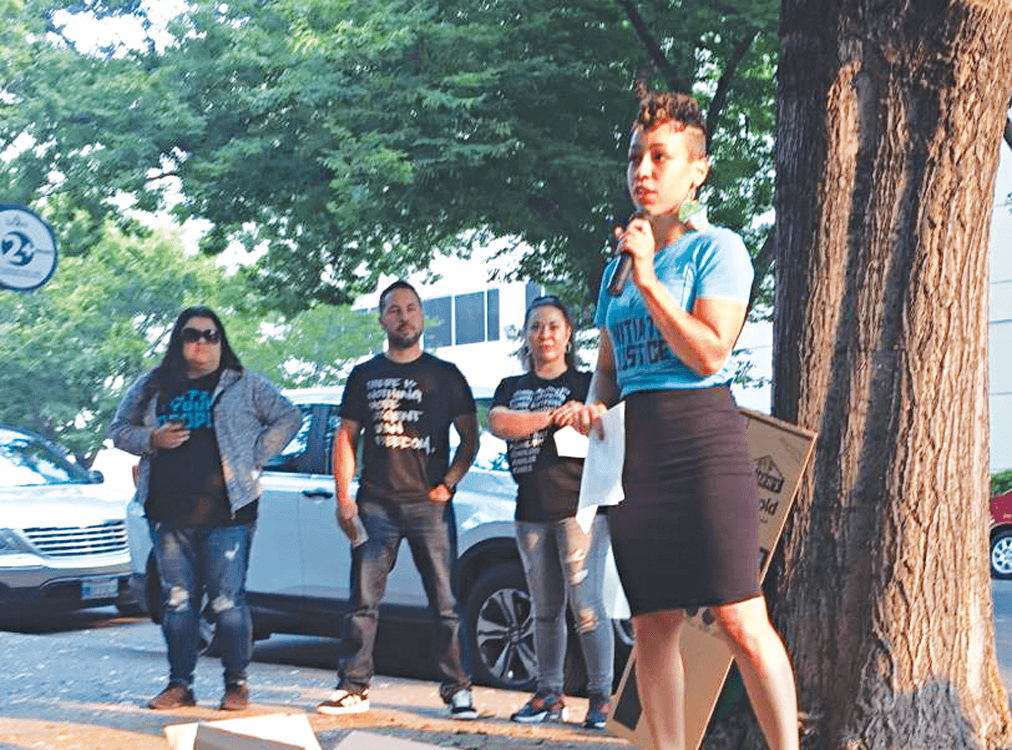 “When you get arrested, you don’t lose your citizenship, so you should have a right to vote,” Vargas-Edmond said. “The civil rights movement gave Blacks a lot of rights, but sending Blacks to prison takes away those rights. That’s not acceptable. There are plenty of people who do terrible things, but what does that have to do with voting rights?”

Restoring voting rights to citizens incarcerated and on parole lowers recidivism risk by making them feel less disconnected from society, according to a 2012 study called The Violence of Voicelessness: The Impact of Felony Disenfranchisement on Recidivism, by Matt Vogel.

“When people have the right to vote, they become more invested in public safety, which reduces recidivism,” Vargas-Edmond said. “In Maine and Vermont, people can vote from prison. It hasn’t been a problem for them; they have some of the lower recidivism rates.”

Initiate Justice seeks to raise $1,000,000 for gathering the 586,000 signature needed to get the filed initiative onto the 2018 ballot. Also, it seeks the support of more criminal justice reform organizations, as well as the help of incarcerated people.

The group consists of formerly incarcerated people as well as people with imprisoned loved ones. Vargas-Edmond’s husband is and prison, her father was incarcerated during her childhood and her mother has been in and out.

“I wasn’t involved in mass incarceration when my father and mother went to jail,” Vargas-Edmond said. “When my husband was arrested, I recognized how unjust the system is, and I would have to do something to change it.”

When Proposition 57 came up, Initiate Justice worked to get it passed. When it passed, its application fell short of expectations and potential, Initiate Justice became one of the first organizations that argued for boarder application. The group compiled a list of wants from a survey of incarcerated people.

“Taina played a pretty big role; Californians For Safety and Justice played a pretty big role,” said Emily Harris, Field Director for Ella Baker Baker Center for Human Rights. CDCR announced that it is requesting an Emergency Readoption of Administrative Law, because “CDCR has determined that changes to the initial Text of Proposed Regulations are needed” following extensive public comment.

Though her husband is due to come home next year, Vargas-Edmond plans to continue fighting for reforms.

“I want to do this forever,” she said. “I want restorative justice. The prison system is harming people that look like me, and I want my future child to live in a country free of mass incarceration.”