In a two-hour visit with a juvenile lifer support group at San Quentin, Cole reaffirmed his belief that we need education instead of mass incarceration.

Scott Budnick, producer of the Hangover movie series and founder of the Anti-Recidivism Coalition, invited Cole to visit the Kids Creating Awareness Together (Kid CAT) group. By working together, Budnick, Kid CAT members and many others have gotten some harsh laws changed. 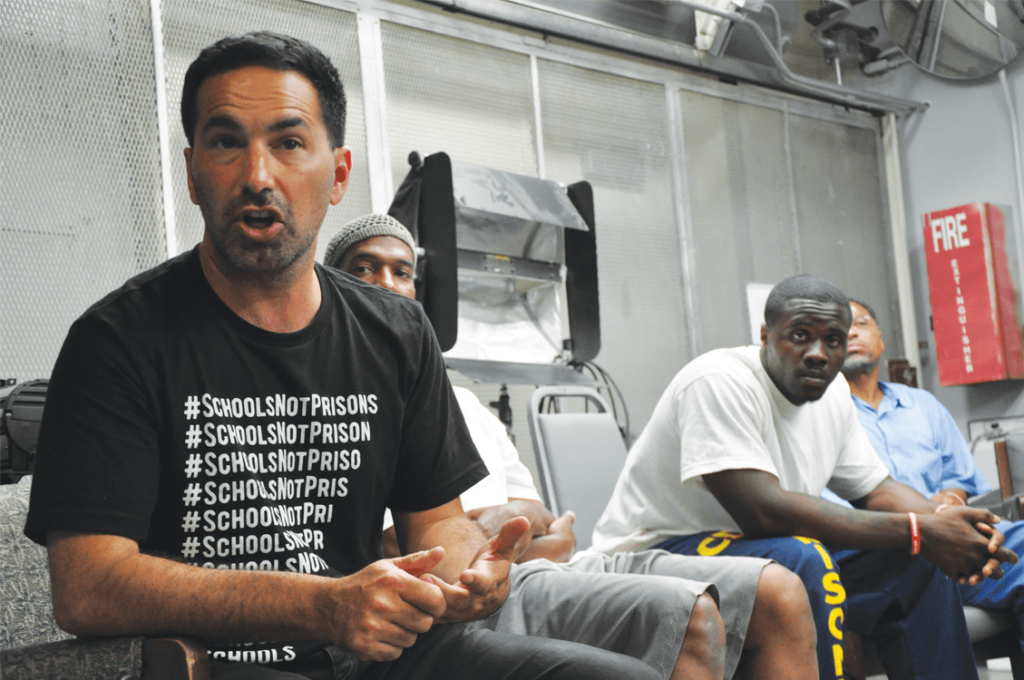 Kid CAT didn’t have a meeting scheduled, so the surprise visit began with Budnick, wearing a T-shirt that said, “#SchoolsNotPrisons,” standing on the yard next to Cole surrounded by a few fans. A few feet away stood Ibrahim Hamad, president of Dreamville Records and Felton Brown, of Dreamville Creative.

The incarcerated men told him about how the lower security section of San Quentin is different from the higher level prisons where they started their long sentences. They spoke about how Quentin allows community members access to the prison to facilitate more than 80 programs. Some of the programs include the Prison University Project, which provides a free college education taught by professors; a coding program; SQUIRES, which mentors at-risk youth; and a media center.

As the word spread that J. Cole was on the yard, more men circled him. Cole sat on a thigh-high ledge wearing a white Polo T-shirt, black sweatpants and original Jordan sneakers. He took the time to greet each new face that joined the group.

“He cares about people like us in blue,” said Kid CAT member Israel Aguilar. “He’s really down to earth and he relates to our struggle. He sees there’s a flaw in this criminal justice system and he wants to see what he can do.”

Budnick shared a story about meeting Cole and said bringing him to Quentin developed through a chain of mutual friends, including a lighting man and a DJ.

Budnick had gone to Cole’s concert in Los Angeles and saw him come out on stage to preform “For Your Eyes Only” dressed in an orange jailhouse jumpsuit, handcuffed and escorted by men dressed as correctional officers. The song itself, named after the album, is about an incarcerated man making a time capsule for a daughter he doesn’t think he’ll ever see again. 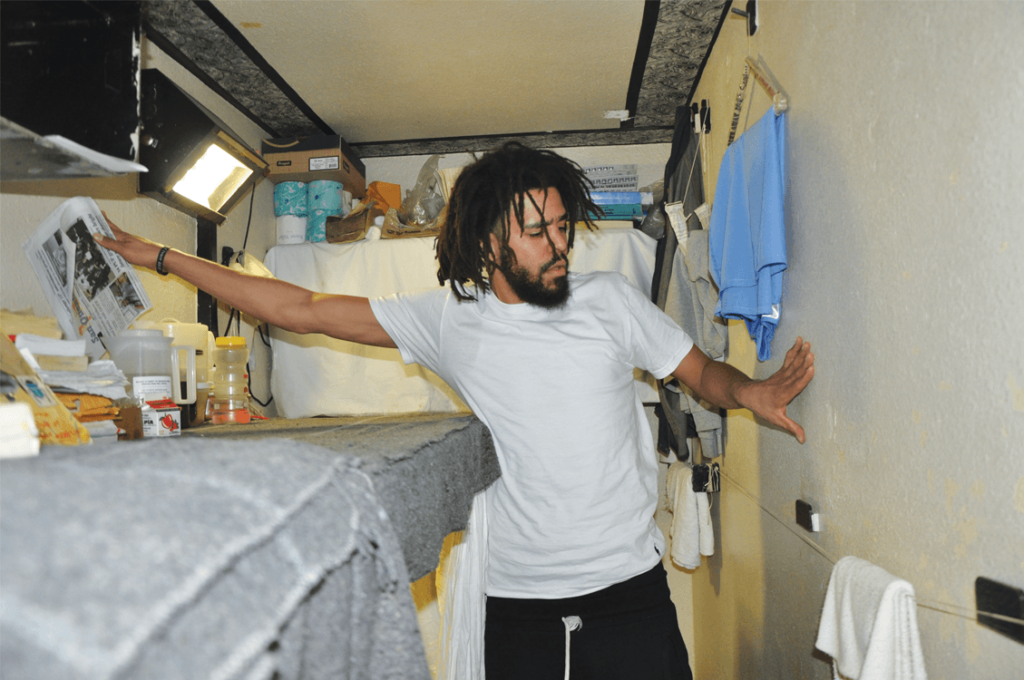 J. Cole feels the confines of a prison cell

While the St. John’s graduate has never served prison time, Cole has friends who have. Every song on the album is meant to change perspectives about incarcerated people.

“Whole point of the album was to humanize people they demonize,” Cole said. “You only get to see killing in the most glorious way, my (thing) was no, let me show the other side. I don’t care how hard you are, if you have a child, that’s done.”

After the concert, Budnick went back stage and found Cole with his wife and their baby. Budnick said, “When you are done with your tour, I’d love to take you into a prison.”

Cole answered, “Forget when I get off tour. I have a day off on Sunday. What prison is near Oakland?”

Sunday, July 15, Cole was posing for pictures with San Quentin fans surrounding him.

Someone on the yard asked Cole to perform “For Your Eyes Only” on the spot. Cole warned that it was four verses and eight minutes long and offered to do two verses. Everyone wanted to hear the complete song so Cole obliged with an a cappella rendition. The men’s heads nodded to the rhythm of Cole’s voice and at lines like, “Hope you find a (brother) with a perspective bigger than the corner, or else it will corner you.”

From the yard, Lt. Sam Robinson led Cole to the prison’s media center where an impromptu Kid CAT meeting took place. About 30 men sat in chairs forming an elongated circle.

Budnick suggested each person briefly tell Cole what brought him to prison and what he wants to do in the future. Curtis “Wall Street” Carroll, whose TEDx talk has over 2 million views, was the first to speak. Carroll said he wants to see financial literacy taught in all prison and schools.

“I want to hire this dude,” said Cole.

Antoine “Aziz” Brown, an ex-gang member who is now a college student and one of Kid CAT’s founders, said “I have a 21-year-old son I’m looking to mentor. I’m just looking to give back.”

Philippe Kelly said, “I was 15 when I committed a gang-related murder and got 40 to life. Thanks to Scott [Budnick], what he’s been able to do has given me light. I might have a chance to get out.”

Louis Scott spoke about his sentence of 199 years to life for pimping and pandering. Now he’s part of a group called STEP, which is dedicated to stopping sex-trafficking.

Earlonne Woods, co-founder and co-host of Ear Hustle, stopped by to ask Cole for a tweet out.

Shadeed Wallace-Stepter, convicted of attempted murder and who has a TEDx talk on YouTube called The New American Hustle, said, “Everybody has the potential to run  a multimillion dollar company. I really believe that.”

After everyone spoke, Cole said, “Thank y’all for sharing y’all stories. When I hear y’all talk … I see a CEO in all y’all. Everybody in those spots y’all came from have that same potential.”

Again, Cole performed the single, “For Your Eyes Only,” as a media center member recorded him.

Cole is one of a growing number of celebrities speaking out against mass incarceration. On Aug. 21, Budnick, Common and J. Cole met in Sacramento. According to a Fox 40 story by Ali Wolf, Common gave a free concert featuring Cole and CNN host Van Jones to advocate for sentencing and bail reform. The following day Common visited Folsom State Prison, where he performed for more than 1,000 men in blue and staff members, and held a roundtable discussion with Budnick and a group of volunteers about criminal justice reform and the importance of rehabilitation.

Departing somewhat from the direction of his mix-tapes, his first studio albums focused on making radio hits. On his second studio album, Born Sinner, Cole dropped the single, “I let Nas Down.” It expressed how he felt hearing that Nas, a rapper he looked up to, was disappointed his music had turned in a commercial direction.

Now that Cole has four studio albums, BET and Billboard Awards, several mix-tapes, his own label and a minor stake in the music streaming service Tidal, he makes the music he cares about.

“Now nobody can tell me nothing,” Cole said.

Overview of inmate deaths in 2017 in CDCR