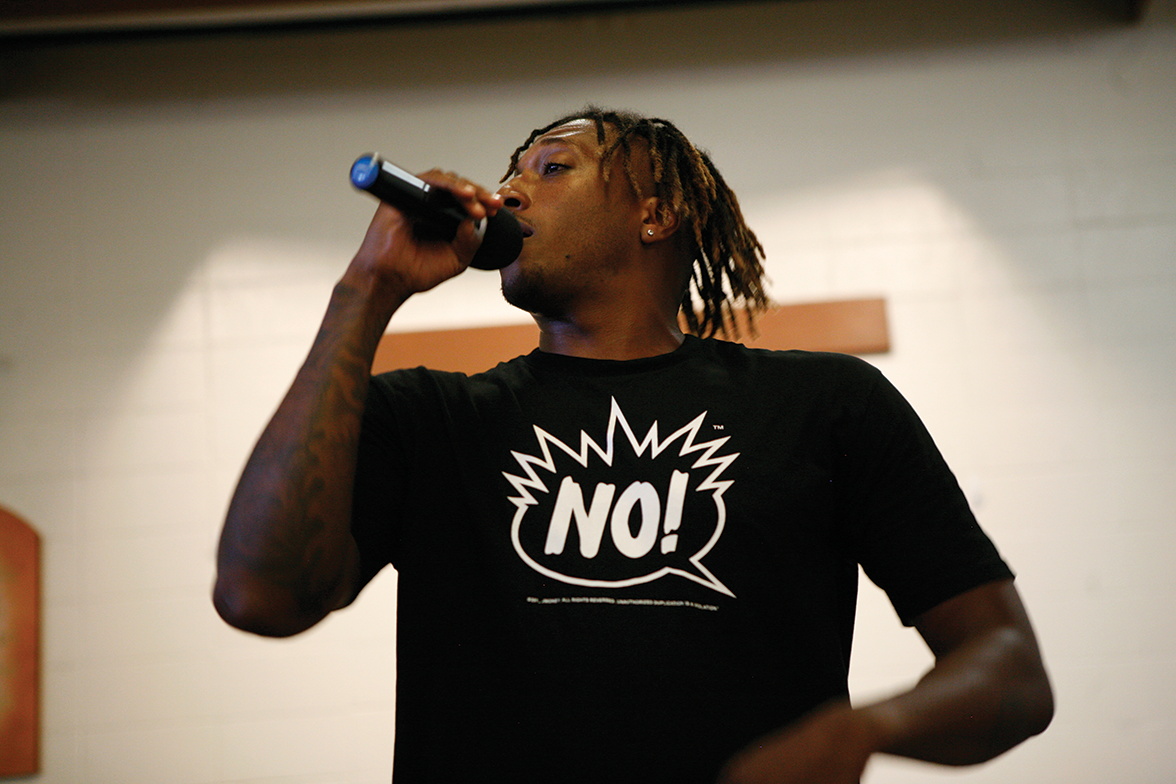 LeCrae performing in the Protestant Chapel

Two-time Grammy-winning rapper LeCrae Moore used a hip-hop performance at San Quentin State Prison on July 24 to deliver inspirational messages and show his Christian faith in action.
“On a personal level, I’m here because I have family behind prison walls: my father, my uncle,” LeCrae said.“I’m attracted to being around people I feel like society has thrown away. People have value, souls have value. Coming here is saying my father and uncle matter.”
During the show, LeCrae used a five-dollar bill to illustrate value.
“You see this five-dollar bill?” LeCrae asked the standing-room-only audience in Protestant Chapel. “I crumpled it up, what’s it worth now? Still five dollars.”
LeCrae rubbed the bill along his lower body, spit on it, dropped it on the ground, and stomped it. Then he told the crumpled bill it was worthless and would never be anything.
“What’s it worth now?”
“Nothing,” someone in the audience yelled.
Correcting that person’s mistake, LeCrae responded, “If I unfold it and take it to the store, it still spends. No matter what happened to it, it never lost its value—you matter, you have purpose. It doesn’t matter what was said or done. If we use $100 bills as wallpaper, we’re wasting it. We didn’t use it for the value and purpose it was meant for.” 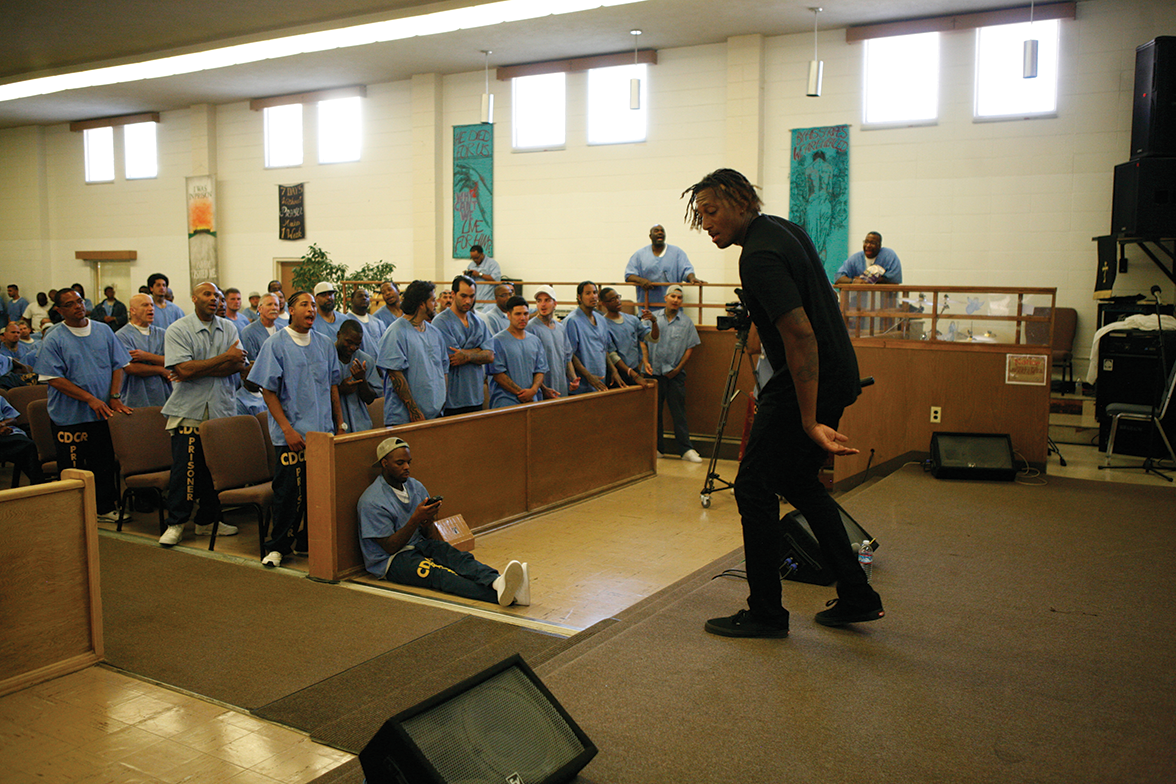 Incarcerated men in the audience openly sobbed as LeCrae’s metaphor sank in.
“I saw three people cry when LeCrae talked about your worth,” Eric “Maserati E” Abercrombie said. “He was like a modern-day Socrates.”
LeCrae is a rapper who is a Christian. He has won Grammies for Best Rap Song in 2013 and Best Gospel Album in 2014. He also received a Grammy nomination for Best Contemporary Christian music. He sold over three million records, with several albums and mix tapes, including his latest, Let the Trap Say Amen.
LeCrae has performed at other correctional facilities including Riker’s Island, Angola, and the Los Angeles County jail. It was the 6-foot-5 rapper’s first time at San Quentin.
“I thought I would have to wait until I got out and go to a concert to meet him but he’s here,” said Jamai Johnson, who owns 10 LeCrae albums and mix tapes. “Moments like this allow you to see, feel and know exactly how much you mean to God and how much love he has for the entire planet.”
Send Musicians to Prison, an organization founded by Nathan Lee, brought LeCrae in with the help of a retired Warden Duffy, formerly with the NYC Department of Corrections, and San Quentin Public Information Officer Sam Robinson.
San Quentin’s own Graced Out Youth Ministries member Ferrari Moody hosted the event, which opened with a prayer and rap performance by Harry “ATL” Smith.
Smith, one of the key players on the San Quentin Warriors team, stated before rapping: “Let’s give it up for Jesus. It ain’t about me. It ain’t about LeCrae. It’s about Jesus Christ.” 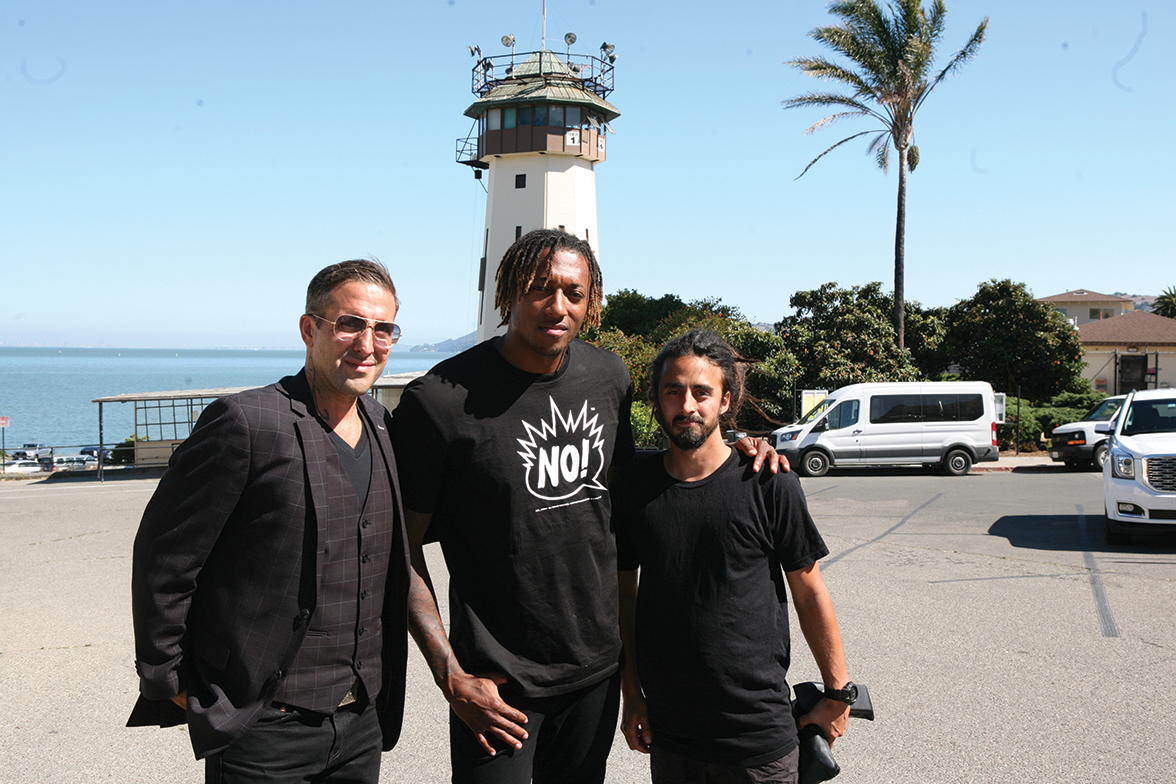 LeCrae took the stage next, giving context before performing a nine-song set including a premiere performance of “Shine a Light on Me” and three songs from his newest album.
During “Shine a Light on Me,” he rapped, “…introduced me to Jay Z, never (see) my dad but I met the music that raised me.”
Before rapping, “Count Up My Blessing,” he told a short story about meeting a man at Angola who said he was blessed, despite serving a life term, because his mother loved him, he woke up and when he died, he would be with the Lord.
“And I’m complaining about being in traffic,” LeCrae said.
Before performing “Ain’t Talking About Nothing,” he used the story of David and Goliath to explain why he uses music the way he does.
“I grew up on Little Wayne, Snoop, Tupac,” LeCrae said. “Then God showed me something. David went to the King and said, ‘I’m going to fight Goliath.’
“The King wanted David to put on armor. David replied, ‘This don’t fit me. Give me a sling and let me fight the way I know how.’ I don’t do hymns or traditional gospel music but give me a beat and rhythms.”
For an intro to his song, “Plugged In,” LeCrae talked about how you can buy six gold chains or buy a barbershop that expands to six chains.
“Let the Trapped Say Amen,” went on about the less glamorous side of the drug game that most drug dealers don’t warn you about.
Before “Praying for You, Man,” LeCrae said, “Our purpose really ain’t about us. It ain’t really about you. It ain’t about me. You might be here to inspire a whole new generation. I’m listening to a podcast from San Quentin and I’m being inspired. Don’t ever feel like your purpose was snatched from you. Your freedom is right here. Pray for the things he has preplanned.”
On his intro to “All Things Work Together,” LeCrae rapped, “The Master artist makes you a masterpiece, regardless.”
LeCrae advised the audience to use their time to figure out who they need to be.
“My man learned how to cook in prison,” LeCrae said. “Even if you have a life sentence, y’all already proved it. You ain’t got to be out there to make an impact.”
The night ended after the concert with an impromptu rap cycle kicked off by Abercrombie playing his guitar and rapping his song “Identity.”
Antwan “Banks” Williams, the “Ear Hustle” sound designer and a talented artist, added a verse.
“Handpicked I can endure the conditions, because this might be the only way I acquire God’s wisdom,” Williams rapped.
A small crowd of mostly rappers joined in on the chorus, “yeah, yeah, yeah,” to Abercrombie’s second song, “Can’t Hold Me Back,” which turned into a free-for-all.
First Tevin “Cutty” Fournette, Abercrombie’s older brother, joined in.
Then Calvin Johnson added a verse followed by Kenneth “HQ” Hawkins, who rapped, “I been converted since my King was murdered; only God can judge me, have you heard the verdict?”
LeCrae bobbed his head and smiled as the rappers gave him a show.
The Grammy-winning rapper left the church humming, “yeah, yeah, yeah.”
“I’m fortunate and grateful to be here,” LeCrae said. “If I inspired one person, I did my job. I leave more inspired by the folks in here using whatever they got to do incredible things.”