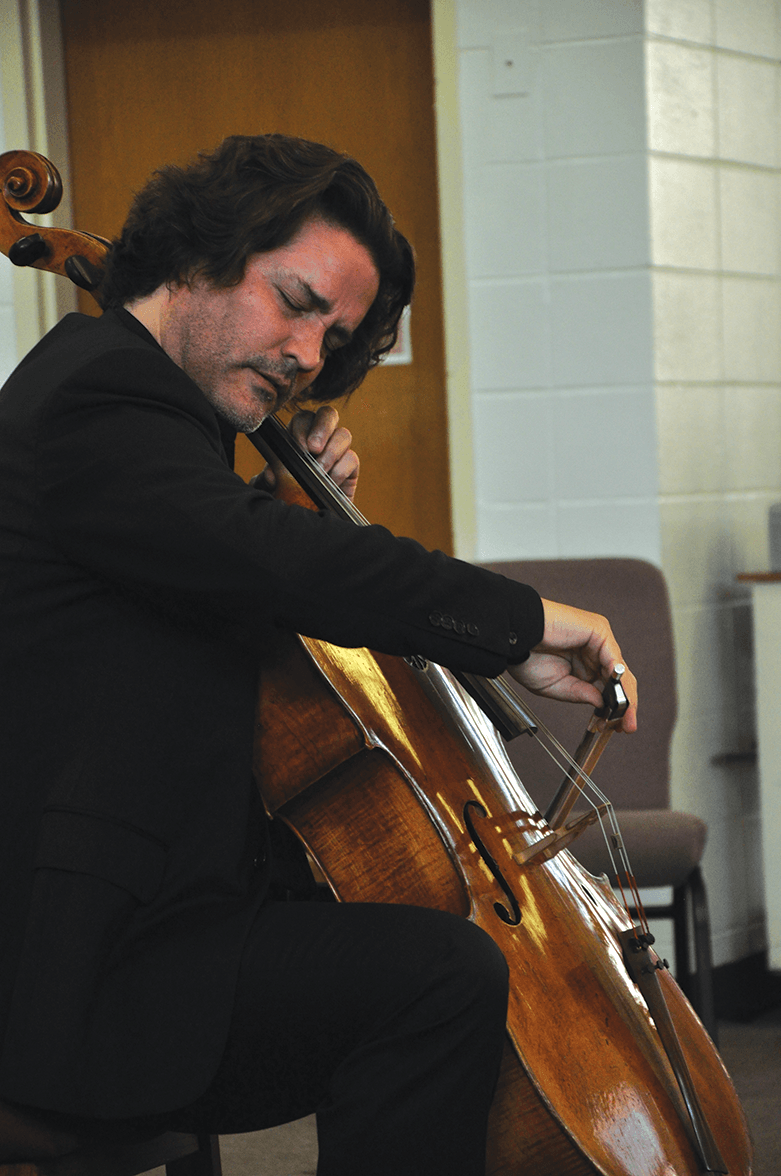 Bailey is considered one of the premier cellists in the world, and yet he decided to play before an audience of prisoners, staff and volunteers in a place where few artists have ever set foot. After achieving so much renown, Bailey visited the prison on April 27 to share his music with men who rarely partake of the fine arts.

“It’s very special to be here,” said Bailey. “I’m looking forward to sharing this kind of uncommon music on this 325-year-old cello.”

“I’m trying not to cry while I play,” Bailey replied. “It makes me happy. It makes me sad. The cello is unique—all of the great composers felt like this.”

“The cello can do basically anything.” Bailey said. “The more you know, the more you want to know” about classical music. The Stradivarius cello he played was built in 1693 and is on loan to him for life. “It’s a storytelling instrument.”

“As you hear this (cello), think about the sound and the instrument,” Bailey told the audience. “What makes the cello special to me is its acoustic. Silence to me is music. Soft stuff is music. I can control it with the bow.”

Bailey did more than play. He educated the audience about the cello and the bow string (made of horse’s tail) and demonstrated how it works. He talked about the 100-year-old bow he used. It’s made from Brazilian wood. He described how rosin, made from tree sap, is rubbed on the bow to make the hairs stick to the strings on the cello.

He described the Stradivarius as the greatest example of the cello. He said it’s supposed to make the lowest tone and its origin is that of a bass instrument. But the cello’s long neck and fretless construction allow a wide range of tone.

“The cello has a maple back with spruce face and everything is held together by a weak glue,” said Bailey. He played the first three notes of the theme from the movie Jaws. “It (cello) was made to play Jaws,” he said as the audience laughed.

Bailey opened his performance playing Bach Cello Suite No. 1. He didn’t have an orchestra or symphony to accompany him. He went at it alone and stunned listeners, some of whom had never heard a cello played live. He explained how the cello plays high notes and low notes. He said its best playing level is in the middle range, in the speaking voice.

The range of high and low frequencies were sonically present as he played and the dynamics of slow rhythm, velocity, vibrato and melody emphasized the instrument’s uniqueness.

There’s a difference between a solo artist and an orchestra, Bailey said. “Mozart didn’t write anything for the cello…So, for me to play Mozart, I have to get other musicians.

“There’s an indescribable feeling that comes from playing inside a facility like this, to share this music,” said Bailey. “It gives a wide range of emotions. There’s a healing aspect. I hope that it makes a bright spot in everyone’s life.”

Bailey said he wanted to play solos by Bach to highlight the cello’s evolution in music and show how it advanced in modern times. “It can hold a melody,” he said. “The first things played will be without a melody. Then I’ll take it to another place.”

Prelude was the second piece performed, then Allemande and Courante. Bailey said the vibrations are very common. “It’s very centering. Music is an escape. It makes time stand still. Every time I pick up the instrument, it’s a different thought. It brings me in a place of perspective that’s hard to explain.”

The audience applauded Bailey between songs to show their appreciation for his performance. He told them he’s not around people much.

“I wanted to be a musician. I didn’t understand the solitude,” said Bailey. “I’m by myself 95 percent of the time. Is this healthy?” He said 310 days out of the year he’s on the road performing around the world and talking to audiences is the only way he gets to have this kind of exchange.

“I could play all day, but I wanted to have an exchange,” said Bailey. He talked to many of the people in audience in an impromptu question-and-answer session. He discussed how he sometimes feels before performing. “If I get nervous then, it means I care,” he said.

“I have my utilitarian cello that I take around to places like Alaska, to kids and other places to make music accessible,” said Bailey. The following weekend he was scheduled to perform with the Marin Symphony at the Marin Civic Center. He said he will play in Istanbul, Turkey, soon.

“At 4 years old, I started playing the cello,” said Bailey. Someone in the audience shouted, “We could tell.” Laughter. “I loved playing so much that my parents had to stop me.”

“I think the opportunity to hear a Grammy award-winning musician in such a personal space is great,” said Susanne Karch, a volunteer with San Quentin News. “How often do you get an opportunity to ask him questions? He seemed like he really related with the audience.”

Someone listening to classical music for the first time would quickly realize Bailey is a virtuoso on the cello. He displayed an easy sense of humor, and given his standing in the music world, he was disarmingly humble. 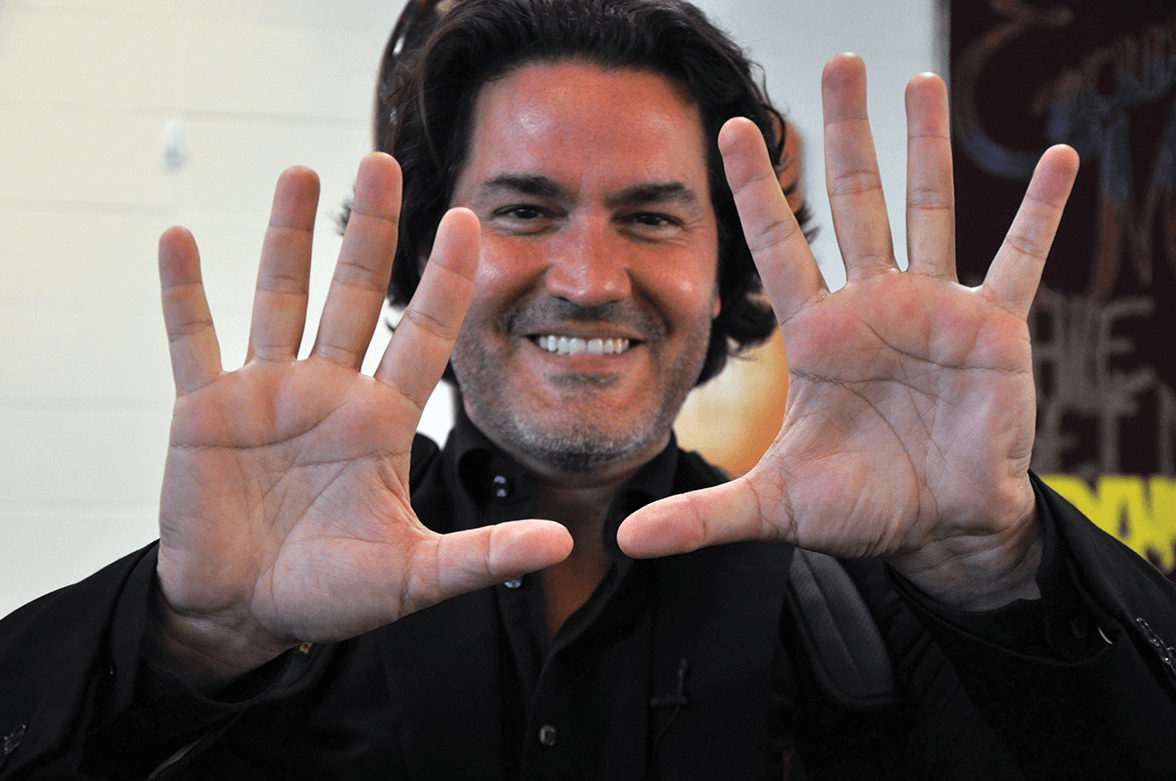 “Any symphony is the heartbeat of a culture,” said Bailey. Because of this, he involves himself with the communities he visits by participating in outreach programs, a flier promoting his concert stated. “He works diligently to make classical music accessible to all, visiting schools, retirement homes, hospitals, and intensive care units.”

As the concert continued, Bailey performed Sarbande, Minuet 1 & 2, Gigue and Bach Suite No. 3, and he repeatedly engaged the audience.

The chapel’s rectangular dimension and acoustics didn’t dampen the listening experience. Bailey, who attended the Julliard School of Music, used his cello to control the sound and tease the physics of space.

Someone asked Bailey if he ever wanted to quit playing. “Yes. All the time as a kid,” he said. “I hated my cello because it made me feel imperfect. But it made me challenge myself.”

At 15, Bailey was told he wasn’t good enough. But he said the cello reminded him that he was human. He said music taught him discipline. “All the things that come with being a musician are life lessons,” he said.

He completed his performance with Prelude, Gluck melody from Dance of the Blessed Spirits, and “Go to Sleep,” Brahm’s Lullaby. Before playing the latter, he asked the audience to take a deep breath and to close their eyes. When the music eventually faded, silence filled the chapel. He told the audience there’s a place “where our minds can go when there’s silence.”

“The cello makes me feel,” said Bailey. “I struggle every day with putting my heart on the line and having somebody write in a paper criticizing (me). I’ve learned to live and believe in what I’m doing, knowing that I’m doing my best.”

Juan Haines contributed to this story