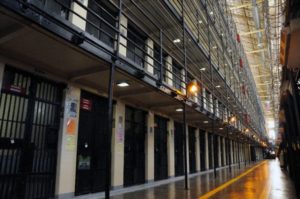 Keith Zon Doolin is on death row despite evidence of his innocence, according to Agnes Buthion, a French journalist who has directed a documentary called “20 Years on Death Row.” Interviewed by The Fresno Bee, Buthion said that she hoped to highlight Doolin’s innocence.

In 1996, Doolin was convicted of a crime spree shooting six sex workers in Central California. The result of his conviction was a sentence of death. Doolin is housed in East Block at San Quentin death row.

During her filming Buthion interviewed Doolin and visited the crime scenes. She also interviewed other people involved with the trial.

“I can’t say and don’t know if Keith Zon Doolin is guilty or innocent,” Buthion told Bee reporter Pablo Lopez. “But, I am certain that his trial lawyer failed him.” Her conclusion was that he did not get a fair trial.

Doolin’s trial attorney, Rudy Petilla of Fresno, resigned from the State Bar of California in 2004, possibly due to allegations of misconduct from another case. In December 2013, Petilla died at age 73.

Doolin had no previous criminal record and was working as a truck driver at the time of the crimes.

During an on-camera interview, David Mugridge, a Fresno attorney, provided a sworn declaration that he possessed evidence that could exonerate Doolin. The evidence was from his former client, Josefina Sonia Saldana.

This Saldana evidence is crucial in the eyes of Doolin’s attorneys. She had testified under the name Josefina Sonya Hernandez during Doolin’s trial, swearing that she heard gunshots, dogs barking and a loud voice that said, “Oh my God, oh my God.” But, she never called the police, according to the article.

“It’s not a coincidence that Louisiana also has the highest incarceration level in the country and the second-highest wrongful conviction rate, according to the National Registry of Exonerations,” concluded Reason. According to Reason, 85 percent of criminal defendants in Louisiana qualified for a public defender in 2016. Due to a lack of resources, 33 of the state’s 42 public defender offices began turning away cases. “The Disappearing Sixth Amendment” by C.J. Ciaramella in Reason magazine June 2017

Saldana’s testimony pertained to the death of Peggy Tucker, who was killed Sept. 19, 1995, behind Saldana’s home. Doolin was convicted of killing Tucker and Inez Espinosa, and seriously wounding three other women.

“I can’t say and don’t know if Keith Zon Doolin is guilty or innocent, but, I am certain that his trial lawyer failed him”

Saldana was later convicted of killing Margarita Flores, and she committed suicide in 2001.

Due to attorney-client privilege, Mugridge cannot release any exonerating information from Saldana unless compelled by a court.

In 2016, Doolin’s death-penalty lawyers, Robert R. Bryan and Pamela Sayasane of San Francisco, petitioned the California Supreme Court for release of Saldana’s testimony. The court has yet to rule on the petition.

Buthion told The Fresno Bee that her investigation raised doubts about his conviction, and she thinks Doolin may not have committed all the crimes.

According to Buthion, the French are fascinated with real-life American crime stories. Her documentary on the Doolin case is set to air in four 50-minute segments on French TV.