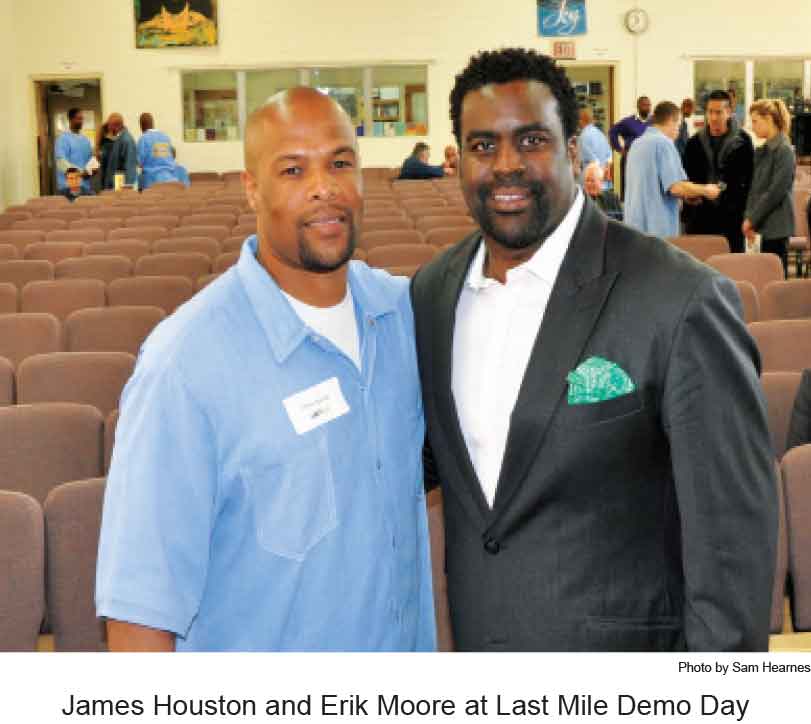 James Houston used what he learned in San Quentin Prison to help reduce the murder rate and mentor young men in Richmond, the city across the bay.

After paroling in 2013, he took on the job of program coordinator for the Office of Neighborhood Safety (ONS).

The organization was started by DeVone Boggan in 2007. He believed that the worst offenders needed to be hunted down, not to arrest, but to transform.

Boggan met Houston when he visited the Richmond Project at San Quentin State Prison. From inside, Houston worked to make Richmond safer while serving 15-to-life for second-degree murder.

As the chairman of the Richmond Project, he led incarcerated residents from rival Richmond neighborhoods in a think tank that met with city officials. They posed solutions to street violence.

“Because San Quentin and Richmond are so close, and there was all that violence going on, especially when it was formed, it made sense to connect with the community,” Houston said. “It made sense for men who have created or furthered the problems in prison, to give solutions and let them (the youth) know the consequences of their actions.”

The meetings with community members like Boggan and Gail McLaughlin, the former mayor of Richmond, now a City Council member, resulted in a curriculum, Public Service Announcements with the flair of positive hip-hop videos, an essay contest asking the youth, “What would you do if you were the mayor?” and other ideas.

“Some 70 million Americans have a criminal record – a number equal to Americans with a college degree,” according to the Brennan Center for Justice. NEW YORK TIMES July 25, 2018 “Zero Tolerance for Zero Tolerance”

The San Quentin administration shut down the Richmond Project in 2016.

In the Richmond community, Houston seeks out young men who are active firearm offenders to present credible alternatives to violence. Some of the Office of Neighborhood Safety techniques involve street outreach, transformative travel and both referring the youth to different resources, walking them through the process of obtaining help, and paying stipends for meeting life goals.

“Every day I go out into the neighborhood and look for ways to support them with resources,” Houston said. “I enjoy what I do. From the men (inside), I’ve learned that we have a responsibility—whether it’s just to your blood relatives—we have a responsibility to hold ourselves with integrity, to show the young men in our community. Even if they’re just seeing me from a distance, it’s important to show integrity.”

On the transformative trips, they take rivals to places as far as Africa to show them the world is bigger than Richmond, and their beefs. A recent trip to Tahoe paired five young men from North Richmond with five rivals from South Richmond.

Young men who have been in the program for at least nine months can receive a stipend between $300-$1,000 for reaching milestones on their “life maps,” a list of goals set to achieve a productive life. Sacramento is now adopting the program, Houston said.

A self-help group that helped prepare Houston for his walk is Victim Offender Education Group (VOEG).

“From my perspective, VOEG is a restorative justice program,” Houston said. “It helped me understand the trauma that I went through, and it changed who I was. I never knew the impact my trauma had on my life on a day-to-day basis or the impact that trauma had on others’ lives and my community.

“One of the main things was I grew up with a single mother: I had no male figure. So what I thought was a man was totally opposite to what I learned inside. I (used to) overreact and had a lot of anger. It could never be too much violence. Violence, that’s what a man does, so that’s…what I lived by…I didn’t want you to get close, because…I was in fear…of being hurt.”

Now Houston understands that anger is a secondary emotion fueled by pain and sadness.

“To release emotions like that in front of men…was life-changing,” Houston said.

He currently works with the Insight Prison Project (IPP) to create a VOEG curriculum for the youth in Richmond.

“It’s a little bit different: some of the youths haven’t committed a crime,” Houston said. “I’m focused on some of the things that they consider normal that aren’t normal—like losing one of their peers. It’s not normal for a 14-year-old to go to a funeral for another 14-year-old that’s been murdered. You come away with something, a sense of a lack of security in your community.

“It makes you more susceptible to committing that crime; you’re just trying to survive. You’ll shoot someone over the smallest thing. It’s different in that we tailor the language to meet them where they’re at.”

Houston learned the value of community while getting his education through the Prison University Project, mentoring youth in the SQUIRES program, learning how to be a counselor in the Addiction Recovery Program and playing flag football on the San Quentin Lower Yard.

“I grew up playing Pop Warner,” Houston said. “Kids from different sides of the city all played on the same team. I had a good relationship with a lot of people from different areas. Even at SQ, it bridged a lot of gaps; people I wouldn’t have otherwise met, even though it’s such a small place.”

Houston talked about his views toward community before, during, and after his release.

Before: “When it feels like you’re not a part of the community, it makes it easier to paint the picture that like, the community is a target. You feel like you are alone, like no one cares about you. (You’re) not listening, and I believe it’s because they weren’t listening. When most people fear you, so they cross the street, you become that person that they fear.”

During: “The right kind of community is so important. You hear so much about people preying on each other. But when I was there, men who had done twice as much time as me were working toward helping me get my time reduced, pointing me in the right directions. It blew me away; I kept looking for the flaws. Men before prison came at me for a reason; they had an angle, something they were trying to get out of it.”

After: “Transitional place, each step to get my life back on course: The Last Mile, the men who went above and beyond to help me gave me the feeling that I hadn’t lost so much, that I was going to be all right.”

Houston, who is now married and has a son, has this advice for the men awaiting a release date:

“Come out knowing that it’s not the ‘pink cloud.’ Know that you still have to apply yourself and it’s going to be hard work; there will be hurdles. To the Richmond Project: if you ever get out, you know you got a job.”

—Katie Wolffe contributed to this story