The two FBI approaches had striking similarities, despite the passage of 50 years.

The “official use only” Black Identity Extremists report follows the November 2014 Grand Jury decision to exonerate the police officers involved in the shooting of Michael Brown in Ferguson, Mo., in August of that year.

“The FBI assesses (that) it is very likely incidents of alleged police abuse against African Americans since then have continued to feed the resurgence in ideologically motivated, violent criminal activity within the BIE movement,” the report says.

Many scholars say the Civil Rights Movement and the revolutionary movements spearheaded by Black liberation resistance of the 1960s, similar to today’s Black Lives Matter, became the targets for the U.S. government counter-offensive to neutralize these movements.

“The full force of the state, the murderous COINTELPRO project of the FBI, had to attack the Panthers because community control of police could never be allowed,” Rick Ayers, an assistant professor at University of San Francisco, wrote in the Huffington Post in 2015. “Protests, which have existed since the beginning of police forces, which were behind all the past urban uprisings in the U.S., and are coming back with renewed focus today, are about the fundamental way that state violence is wielded and the demands by communities for a different relationship to resources and to each other.” 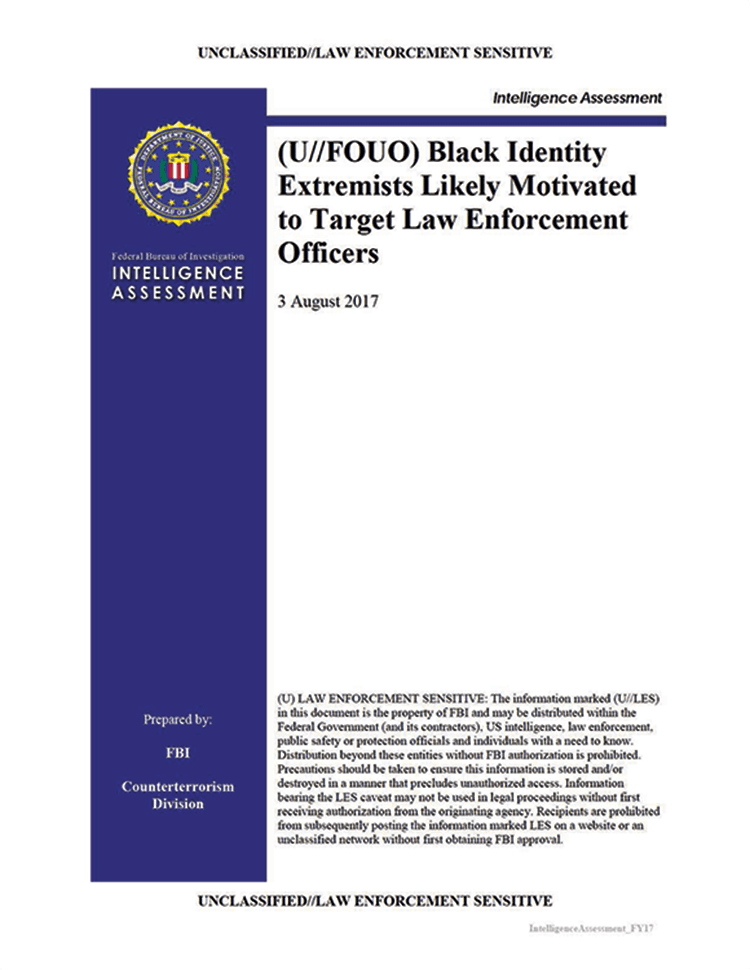 The U.S. government’s alleged illegal use of programs, such as COINTELPRO, to kill, imprison and disrupt what it judged as subversive activists was followed by the war on drugs. The ensuing decades ushered in a vast expansion in building prisons and imprisoning people, a phenomenon often called the “prison industrial complex.” California went from 12 prisons in 1970 to 35 institutions under the CDCR today.

In 1954 the Civil Rights Movement was still in its infancy when the U.S. Supreme Court in Brown versus the Board of Education ruled the “separate but equal” doctrine unconstitutional. Following the court’s ruling, in 1955, Blacks organized a boycott of the city bus system in Montgomery, Ala., after the city arrested Rosa Parks for refusing to sit in the “colored” section in back of a bus, and the Civil Rights Movement was born.

By the 1960s, Blacks around the country were protesting against segregation, discrimination and police violence. The Student Nonviolent Coordinating Committee (SNCC) and the Congress of Racial Equality (CORE) organized “Freedom Rides” so Blacks and Whites could travel together by bus. Some staged sit-ins at segregated lunch counters in the South and were beaten by mobs of angry Whites.

Many Blacks did not take this lying down. Black veterans formed the Deacons for Defense in Louisiana. Elsewhere, Robert Williams, an ex-Marine, took the view that Blacks should defend themselves with guns, if needed. Williams was the National Association for the Advancement of Colored People’s (NAACP) North Carolina president. The Black Panther Party was born in Oakland in 1966.

In 1970, the FBI provided a secret report to President Richard Nixon that said, “A recent poll indicates that approximately 25 percent of the Black population has a great respect for the Black Panther Party, including 43 percent of Blacks under 21 years of age.”

According to author Howard Zinn, from 1956 to 1971, the FBI’s COINTELPRO acted 295 times against what it deemed Black militant groups. The government attempted to dismantle these groups through harassment, wiretaps, sabotage and other means, including terror and murder, Zinn wrote.

In 1974, reporters learned of the existence of the “Subversive Organizations List” after Attorney General William Saxbe declared the list was ending with the exception of 52 organizations under surveillance by the FBI. The Justice Department, however, refused to reveal what groups were on the list, because it was a secret.

The list was created in 1947. At its peak, there were 300 designated “subversives” on the list, including the Communist Party USA, the Socialist Workers Party, and the Abraham Lincoln Brigade, members of which fought in the Spanish Civil War against Franco and the fascists.

FBI director Hoover used the bureau to investigate Americans. Today, United States law enforcement and intelligence agencies have greater access to the personal information of the whole population than was imaginable decades ago.

“The last thing those in power wanted was an organized underclass, ready to fight for revolution,” Davis said.

The FBI’s BIE report says Black “extremists have historically justified and perpetrated violence against law enforcement, which they perceived as representative of the institutionalized oppression of African Americans, but had not targeted law enforcement with premeditated violence for the nearly two decades leading up to the lethal incidents observed beginning in 2014 (the Michael Brown killing).”

Today the FBI applies the term Black Identity Extremist retroactively to violence that peaked in the 1960s, when Blacks rebelled against segregation. Organizations like the 1970s Black Liberation Army (BLA), formed to “take up arms for the liberation and self-determination of Black people in the United States,” are considered a BIE group.

The FBI warns that unrest among Blacks “may also lead to an increase in BIE group memberships, collaboration among BIE groups or the appearance of additional violent lone offenders motivated by BIE rhetoric.