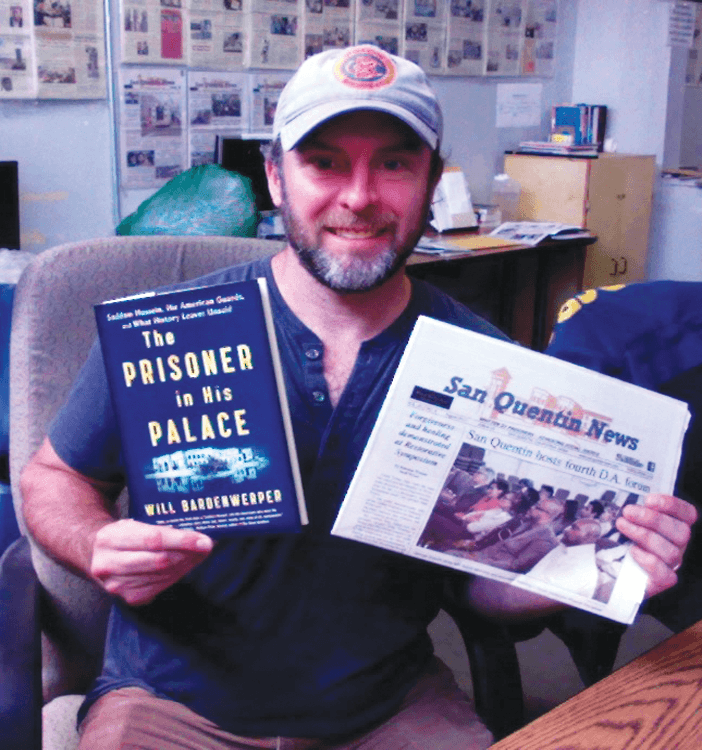 Author and Iraqi veteran Will Bardenwerper in the SQ newsroom

A decorated Iraqi war veteran-turned-journalist and author came to San Quentin on Sept. 1 to talk about his book, which portrays what it was like to guard Saddam Hussein in the months prior to his execution.

Will Bardenwerper said the American guards, self-dubbed “Super Twelve,” told him that Hussein was not the person depicted by mainstream media.

“It’s evil what you did, not who you are,” Bardenwerper said he learned from the soldiers. “The guards struggled reconciling this peaceful man to the same person attached to so many terrible things.”

One of the medics who treated Hussein had to go back to the United States on emergency leave. The doctor’s brother was wrestling with drug addiction, alcoholism and committing petty crime. However, the medic displayed genuine concern about Hussein’s well-being while he was away. The medic told Hussein about his brother’s dilemma. Hussein stood up and hugged him, and said, “I will be your brother.” The exchange between doctor and patient was an example of humanitarianism in spite of circumstance.

Bardenwerper also talked about what it took to investigate and research the book.

Hussein’s childhood was violent and traumatic. He came from one of the most violent parts of Iraq. His father had been killed, his older brother died when he was young and from his earliest days, he had to stand up for himself.

“His environment affected him,” Bardenwerper said. “But, there were many people who grew up like him and were not as violent.”

Pulitzer Prize–winner David Finkel described The Prisoner in his Palace as “a timeless story about duty, honor, cruelty, and most of all, compassion.”

The Super Twelve were young kids, some right out of basic training, Bardenwerper said. “They were very close to him, protected him at all costs and really got to know him.”  He added, “The question: to what extent is this manipulation or a genuine human connection or a little of each, is undetermined in the book. I don’t try to connect every dot. It’s up to the reader to choose which of the three scenarios is true.”

As a contributor to The New York Times and The Washington Post, Bardenwerper said journalistic neutrality kept him from taking sides on whether the sympathy Hussein gained from his American guards came from sincere or fake displays of emotions.

In San Quentin, the subject shifted to the relationship between officers and inmates in California prisons.

Bardenwerper said he’s always been against the death penalty, but didn’t write the book to make an argument against it.

The Prisoner in His Palace will be reviewed in the next edition of San Quentin News.