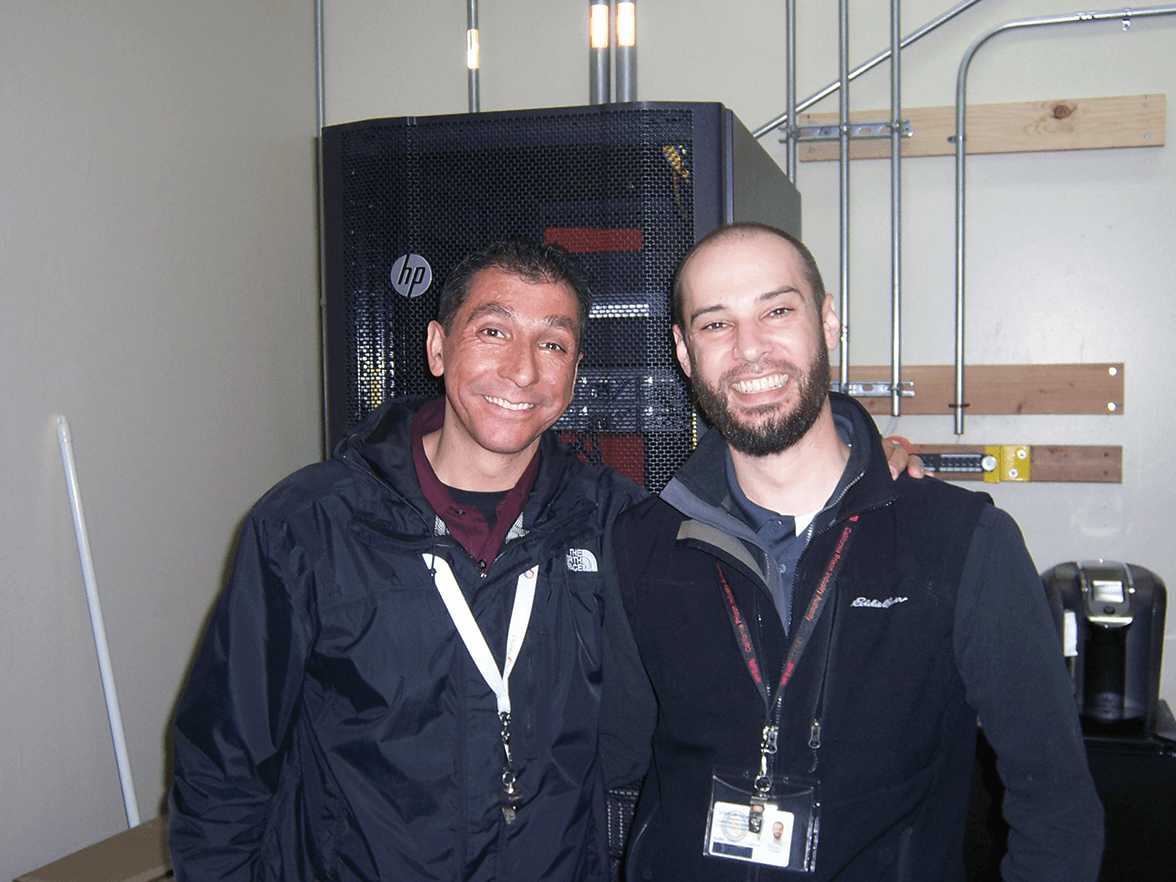 Behind San Quentin’s walls, there is a pair of programs dedicated to closing the digital divide, Code.7370 and TLMWORKS. Tulio K. Cardozo, a former San Quentin inmate, runs one of them.  These programs are sponsored by The Last Mile.

Cardozo is in charge of TLMWORKS, a coding development joint venture. It pays a whopping wage of $16.49 an hour to inmates.

“I’ve got to make four client calls this afternoon,” said Cardozo as he guided me to the TLMWORKS offices. “Why don’t you speak with a few of our team members first?”

The men of TLMWORKS are completely quiet as they write code for clients ranging from private companies and municipal governments to nonprofits and our own San Quentin News.

The coding rooms have numerous customer logos framed and hanging like trophies on the walls. Each one represents a successful client project.

Anouthinh Pangthong  chimed in when asked about what sets Cardozo apart, “Tulio believes in us. Everything that I’ve done here is identified ‘PROUDLY DESIGNED AND DEVELOPED AT TLM WORKS.’ He makes us shine.”

Cardozo appreciates the importance of respect. He was a San Quentin H-Unit dormitory yard inmate for more than three years.

“From 23-30 years of age I was incarcerated; this is my chance to give back to society,” said Cardozo about one of his main his reasons for returning to San Quentin.

As the on-site manager, Cardozo’s chief role is keeping each project on task and time.

“The way I learned this stuff is by trial and error. Just like you are now but you have the benefit of my experience,” Cardozo told a teammate, Jason Jones, who was working to optimize a client’s website.

Around us, tech-jargon was flying hot and heavy: “Debugging Node from JavaScript” and “Have you used Chrome DevTool to allow you to decompile more efficiently?” asked Cardozo of Jones.

The work vocabulary is necessary to facilitate precise communication of what the team needs to do on a given client-project. A key procedure for Cardozo, is to explain a specific skill then find a way to convey it to all the other inmate-employees of TLMWORKS.

“These men learn cutting-edge technology through Code.7370, and then we keep their skills up to date [at TLMWORKS],” said Cardozo.

The consistent opinion heard from the TLMWORKS team is that Cardozo demands the best of them and does all he can to provide them with the tools and skill sets needed to succeed.

“He walked the same path as we do. The fact he came back here as a success tells me that I can also have a career in coding,” said Jones.

“I’ve been involved with The Last Mile since 2013,” said Harry Hemphill. “Working for TLMWORKS for almost two years already. My salary is $16.50 an hour for an average of 30 hours a week.

“He was an inmate and was in H-Unit where I live. He taught himself to code, left prison and started his own web-design shop.

“My passion is to start my own dev-shop,” Hemphill continued. “He is guiding me to be able to have all the skills necessary to become my own boss. It is not his job; what most impresses me about Cardozo is that he is compassionate and really wants each of us to succeed at TLMWORKS and on the outside.”

When asked about the most difficult aspect of working at San Quentin, Cardozo said, “The process of how to work without direct connection to the net always adds complexity to an already complex process.”

Authorized to have internet access, Cardozo must walk inmate-workers through the information that will help them do their job. Tutorial videos verified by Cardozo as appropriate and authorized for release was played to the team.

“This is first and foremost a business. All our employees know that both the company and they are accountable to our clients,” he said.

All of the TLMWORKS inmate employees were graduates of CODE.7370 training program also offered at San Quentin.

If an inmate can complete at least two of the six-month CODE.7370 training cycles, he can apply to work at TLMWORKS. All the current employees have completed all three cycles offered by CODE.7370.

“There is real opportunity here,” Cardozo emphasizes, “If you really connect in this space, if it excites you and you want to come back to class and challenge yourself, we have the tools to allow that.”

When asked about the key to successes at both CODE.7370 and TLMWORKS, Cardozo said, “You can believe in yourself. This is the best opportunity to practice here and learn what it is like to work on a team at both a professional and individual level. There is no better time to build professional habits than right now.”

TLMWORKS is growing. “I now have six people on my roster and looking to hire more when the next batch graduates [from CODE.7370].

“We operationally can handle about three projects at one time right now. We have a well-developed pipeline of potential clients. Like many development shops on the outside, we don’t have a shortage of projects, rather of talented people. We will hire as many as can come through the CODE.7370 program,” said Cardozo. “If you are qualified and able, I will consider you as a serious candidate to become part of our team.”