In April a dozen San Quentin prisoners graduated from an innovative technology training program where they had learned 21st Century computer coding skills. The class setting was a large space once used to store the 1930s-style printing equipment that until 2010 printed the San Quentin News. 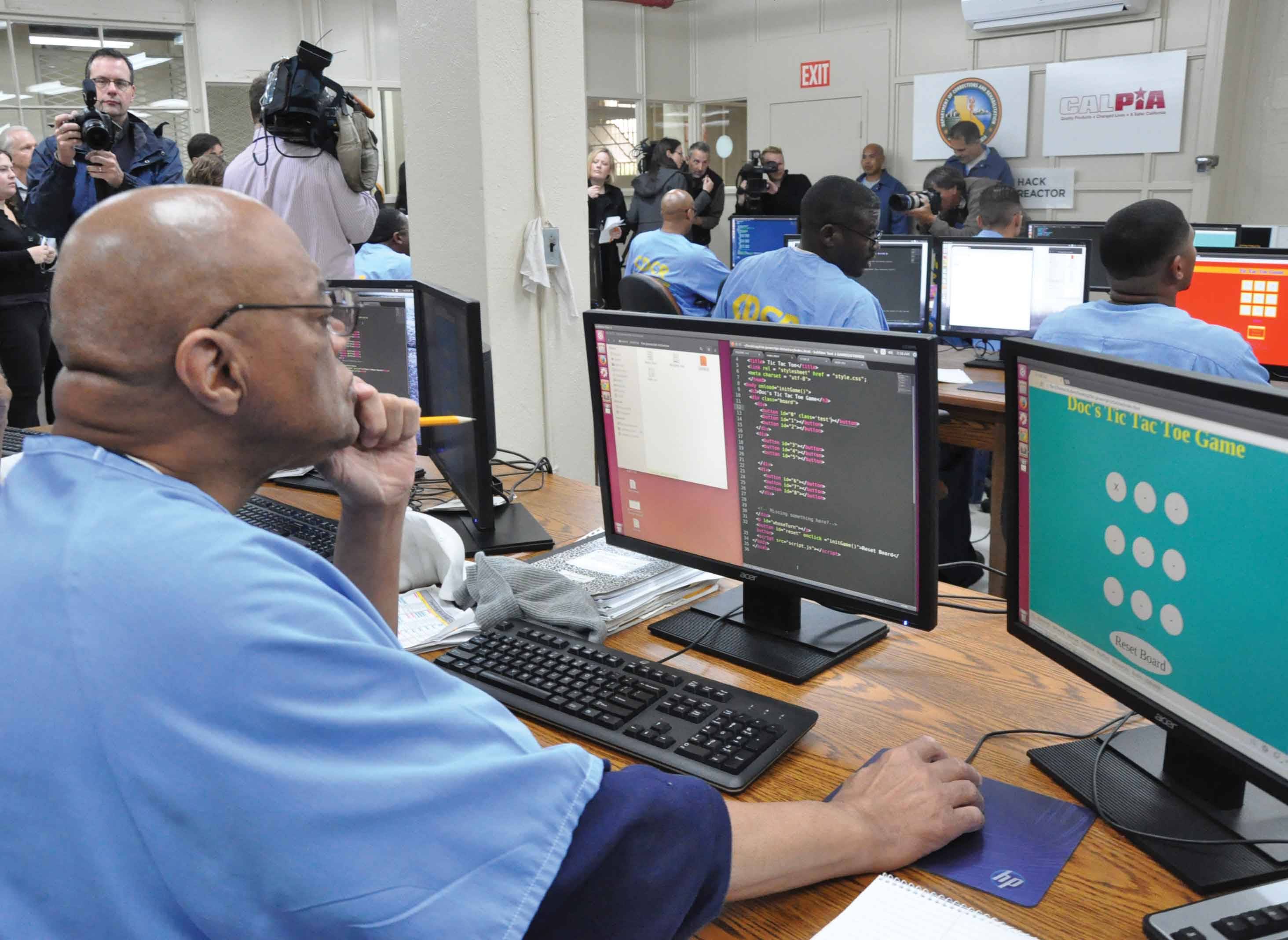 The program, Code.7370, was developed by venture capitalists Chris Redlitz and Beverly Parenti in collaboration with the California Prison Industry Authority (CALPIA), the California Department of Corrections and Rehabilitation (CDCR) and Hack Reactor, a coding academy in San Francisco.
“The biggest challenge to teaching this course is the lack of internet access to the students,” said Shawn Drost of Hack Reactor. “It’s like teaching wood shop. You need material in class to use as examples. Most of the coding training is project-oriented where internet access is needed. We had to overcome that obstacle.”
Silicon Valley’s technology business community helped develop the course syllabus along with administering the instruction to the students.
The coding programs HTML, CSS and JavaScript are taught visually through a video conference call that the prison administers or the administration can monitor. Hack Reactor volunteers and CDCR supervising instructor Jon Gripshover are on site at the prison to guide the students through the course. An offline computer lab is available four days a week where students can work on coding projects.
“Some of the students did not even know how to use a computer,” said Gripshover. “Hack Reactor had to create a curriculum that would teach the fundamentals of coding, and then move on to the higher levels needed to produce applications.”
Chris Schuhmacher, one of the graduates who was selected to speak at the ceremony, goes before the parole board this June.
“When I first came to this class, I was at ground zero. But, I had a willingness to learn,” said Schuhmacher. “My biggest fear was what type of life I would have upon my release. Thanks to Code.7370, I have the answer.”
Schuhmacher said in six months of training he did 679 hours of coding.
“The 679 hours have changed the trajectory of my life,” he said. “It has inspired me to want to pay this gift forward. Upon my release I’d like to donate 679 hours of my time to give others the opportunity to learn what I’ve learned.”
Graduate Damon Cooke said learning coding was life-changing for him, his family and his community.
“A lot of people believe the mantra that men can’t change their lives when they are in prison,” Cooke said. “But, Coding.7370 taught me due diligence, perseverance, persistence and that the mantra isn’t true. Before coding, I couldn’t tell you the difference between a function and for loop. Now, I can deal with methods and operators.”
Graduate Jorge Heredia said, “This certificate means that I add a notch to my life’s value. It is a stepping stone that will be able to make my life and those around me better. It certifies that I am able to create something, and I’m on the right track.”

PIA General Manager Charles Pattillo emphasized that this was the first time prisoners were taught coding. The annual cost to run the program is between $60,000 and $70,000, he noted.
“The next step is to get with private companies that would take contracts that would normally go overseas and give them to these graduates,” said Pattillo.
Due to the vetting process the companies must undergo, the companies could not be named. However, Pattillo said there are five companies being vetted.
“I feel like a proud mom,” said Parenti while looking at the graduates. Referring to program supervisor Gripshover, Parenti said, “Jon is the perfect fit for this program. He leaves his home at 4 a.m. each morning to get here. He’s dedicated to this program.”
Graduate Harry Hemphill, once employed by Volvo and Yamaha, said his addiction to drugs was his gateway to prison.
“I’ll be getting out of prison going to a new world that I’m unfamiliar with. Code.7370 is my second chance in life. It gives me hope and confidence that when I return to society I can be a productive member. Jon (Gripshover) did an outstanding job getting us the resources needed for this program. He got down in the trenches and pulled us forward.”
Co-founder Redlitz said, “We want this idea to be replicated and duplicated all over. We’ve been able to navigate through a lot of challenges. But, the administration PIA, and Hack Reactor worked with us to get this program going.” Redlitz pointed to Pattillo and said, “Chuck is a can-do man.”
One of the newest volunteers to the Coding.7370 program is 27-year-old Hans Schoenburg, a software engineer.
“I found that coming here and helping puts my professional life in the present. It allows me to give back, and have gratitude,” Schoenburg said, “I have friends who teach in prison and they say that inmates are most engaged students.”
Deputy Warden Kelly Mitchell thanked Redlitz and Parenti for bringing the program to San Quentin.
Mitchell looked at the graduates and said, “You’re given the resources you need so that you don’t come back. I truly believe that this class is preparing you for that. We hope that this will give you the skills to get a job at what you like doing.”
“Everyone in the country is talking about this class,” said Brante Choate, from the Office of Correctional Education in CDCR. “It is catching worldwide attention.”
CALPIA trains approximately 8,000 offenders per year in service, manufacturing, and agricultural industries in California’s penal institutions.
CALPIA is self-supporting and does not receive an appropriation from the state budget.
CALPIA has 11 other highly skilled training programs in the Career Technical Education (CTE) programs, in addition to Coding.7370.
CTE carpentry, construction labor, modular building, computer training in Microsoft, and underwater welding programs are some of the most effective correctional rehabilitation programs in California, Pattillo told the audience. CTE graduates have a cumulative recidivism of 7.13 percent, according to CDCR.
Pattillo told the students that the best way they could repay society is getting out of prison and staying out.
More information about CalPIA can be found at www.calpia.ca.gov.
https://sanquentinnews.com/game-theory/