After working 17 years within the California penal system, Tom Bolema, 66, is set to shift his focus from working with inmates to working on his home, family and arts.

“Having a career is a blessing, but also a big sacrifice,” Bolema said. “Your personal relationships suffer and you fall behind on the maintenance of the home and the completion of personal projects. As much as I’ll miss seeing students turn their lives around, it’ll be nice to get off the clock and be under my own supervision.”

Bolema started with the department at Lancaster prison in Los Angeles County and taught ESL/ABE I classes before the principal “took off the leash,” freeing him up to expand educational services. He started a veterans group and a Criminals and Gang Members Anonymous (CGA) chapter, coordinated a re-entry program, and served as chief assistant GED administrator. He sponsored many inmate activity groups involving art, music and literacy, and pioneered the Television-Aided Instruction Program, a distance learning opportunity never before seen in California prisons. The educational programs he produced were featured on closed circuit institutional channels. He also filmed training videos for the correctional officers. It was this work, and a background in Hollywood productions, that paved the way for his transfer to San Quentin in 2006.

Burton Adult School at San Quentin was looking for a teacher to supervise Distance Learning and coordinate college programs. Bolema showed them a promotional video he had produced about the school at the Lancaster prison and he got the job.

“It was a perfect fit,” Bolema said. “I was thrilled with the abundance of programs at San Quentin and the positive attitudes of the staff and residents. I had always wanted to live in the Bay Area because of its natural beauty and progressive culture.”

“I have known Tom for about 10 years,” said J. Kaufman, ABE I teacher. “What he brought to teaching was street smarts. With certain teachers all you get is just the academics. With his retirement he has a lot of interests that will keep him active.” 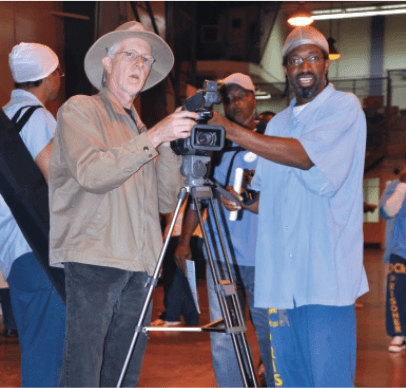 Bolema’s street smarts came from growing up outside Detroit, Michigan. “Education saved my life,” he said. “I got in some trouble as a kid. There was a cultural revolution going on. I dropped out of school in the 10th grade, but I got my GED at 18. I went to junior college and got straight A’s. I studied constantly to prove I could do it and it paid off. That’s why my mantra is ‘stay in school and never stop learning.’”

“It’s going to be a big void trying to replace Bolema,” said inmate Orlando Harris, Bolema’s former teacher assistant. “He wore many hats; he will be missed by staff and students alike. I wish him well in his next journey in life.”

Bolema’s first love has always been the arts; he earned a bachelor of arts degree in literature and film from Oakland University in Detroit. He moved to Hollywood in 1975 and found success as a scenic artist, working on sets for numerous productions including Michael Jackson’s “Thriller,” the sitcom “Married with Children,” and “The American Music Awards.”

He pursued his music career as lead singer and guitar player with his band The Butchers, a socio-political rap and rock group.

“We did a documentary on homelessness called ‘Justiceville,’” he said. “I wrote the theme song and we got Ice T to rap on it.” But with the industrial arts business declining at the time and a new baby on the way, Bolema went back to college at the age of 40 to get his teaching credential. He taught English in Antelope Valley high schools until he got hired at Lancaster in 1999.

“Working with prisoners as an educator is powerful, rewarding, and fulfilling,” he said.

“I have a penchant for helping the underclass; I’m a champion of the underdog.”

Education Officer R. Reyes said, “Bolema had the experience to deal with the inmates. He was always professional. After working with him over the years, he helped me learn some things.”

Reyes recalled an incident involving an inmate who couldn’t find the classroom where he’d been scheduled to take an assessment test.

“The inmate was getting impatient and disruptive, but Bolema calmed the guy down and ensured him he wouldn’t miss his test, and guided him to the right place. Bolema then looked at me and said, ‘You never know what someone is going through or their state of mind until you first talk with them about what is happening with them,’ and that stuck with me,” said Reyes.

Moments like that are symbolic of his commitment to provide inmates a fair access to education. He recently volunteered to supervise San Quentin’s Voluntary Education Program (VEP) after its former facilitator retired.

“I credit Bolema for keeping the VEP program going,” said inmate Danny “Hollywood” Ho, a VEP tutor. “He was the only teacher coming over; he was easy to work with, and he always stayed the same.”

“Sometimes you have to be an activist to get the job done,” said Bolema.

Bolema produced an out-of-pocket feature movie “Bird Dog — A Canine Flight Fantasy” and has more writer/director projects in development, including one about the San Quentin News.

“This job has been an incredible experience,” he said. “Thank you