Dozens of children with painted faces posed for pictures to show men doing time in San Quentin what Father’s Day means to them. Thanks to Get on the Bus (GOTB), sons and daughters, mothers and fathers boarded buses on June 2 and traveled from cities as far as Los Angeles to visit their incarcerated relatives.

Oscar Arana with his daughter Arianna

GOTB, in conjunction with the California Department of Corrections and Rehabilitation (CDCR), has held the pre-Father’s Day event for 17 years.

Sara L. Smith and Tami Falconer from the CDCR Office of the Ombudsman stood in the prison’s visiting room watching little children run and play with their incarcerated fathers.

“That’s a little cutie,” Falconer said as a toddler rambled by, pushing a toy lawnmower.

“We’re here to provide support and ensure that it’s a smooth process for visitors to see their loved ones,” Smith said. “We get a pleasure from seeing the dads with big smiles from being with their families.”

GOTB does all the paperwork for the visit. It also provides chaperones for children who have no adult to accompany them. It charters the buses to and from the prisons and provides all the meals during the trip.

Darnell “Moe” Washington’s mother Bobbie Young, two of his daughters, and his granddaughter came to visit.

Since 2011, Young has been able to visit Washington through GOTB. 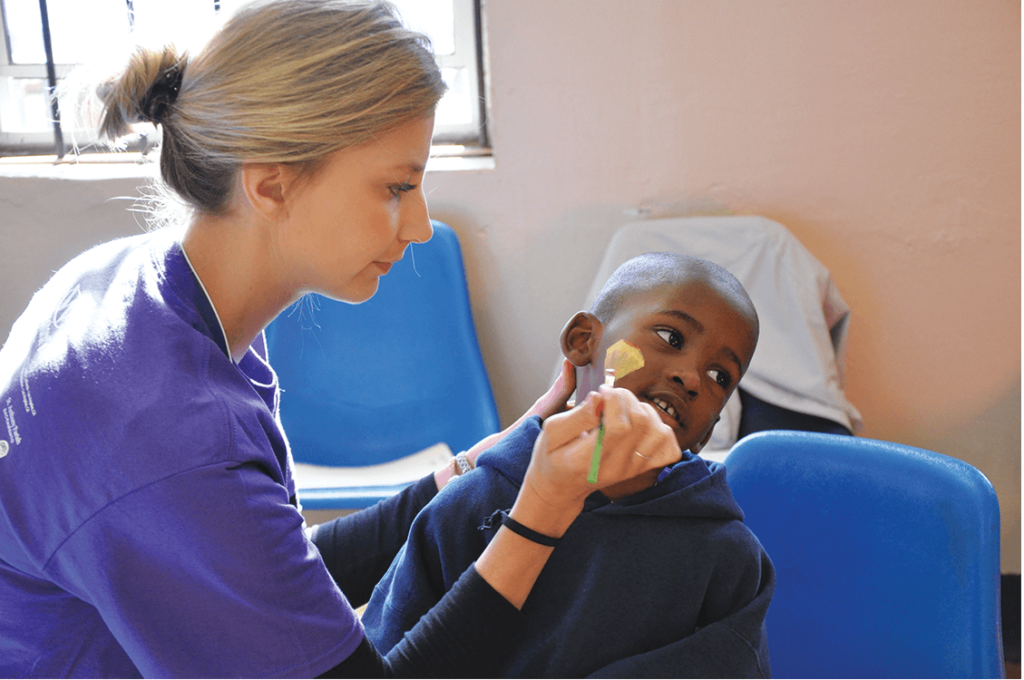 “We started seeing him through Get on the Bus when he was at another prison,” Young said. “The volunteers are nice. Some of the parents really don’t want to come, but they let their kids come to see their fathers. That’s good, because the kids get to know their fathers. But, we need more volunteers from the community. Both of Moe’s daughters came today, because they love coming up here.”

Center for Restorative Justice Works representative Walter Hammond, 54, has been assisting GOTB for three years. He supervises GOTB regional managers, volunteers and buses as well as the program’s donors, churches and other civic organization that support GOTB and the families who use its services.

“My whole thing is I don’t want any of those children to have to go through what their parents have gone through,” Hammond said. “They can hope and dream and know that there is purpose in their lives, regardless of having an incarcerated parent. These are their parents, and they should have a loving relationship with their parent.” 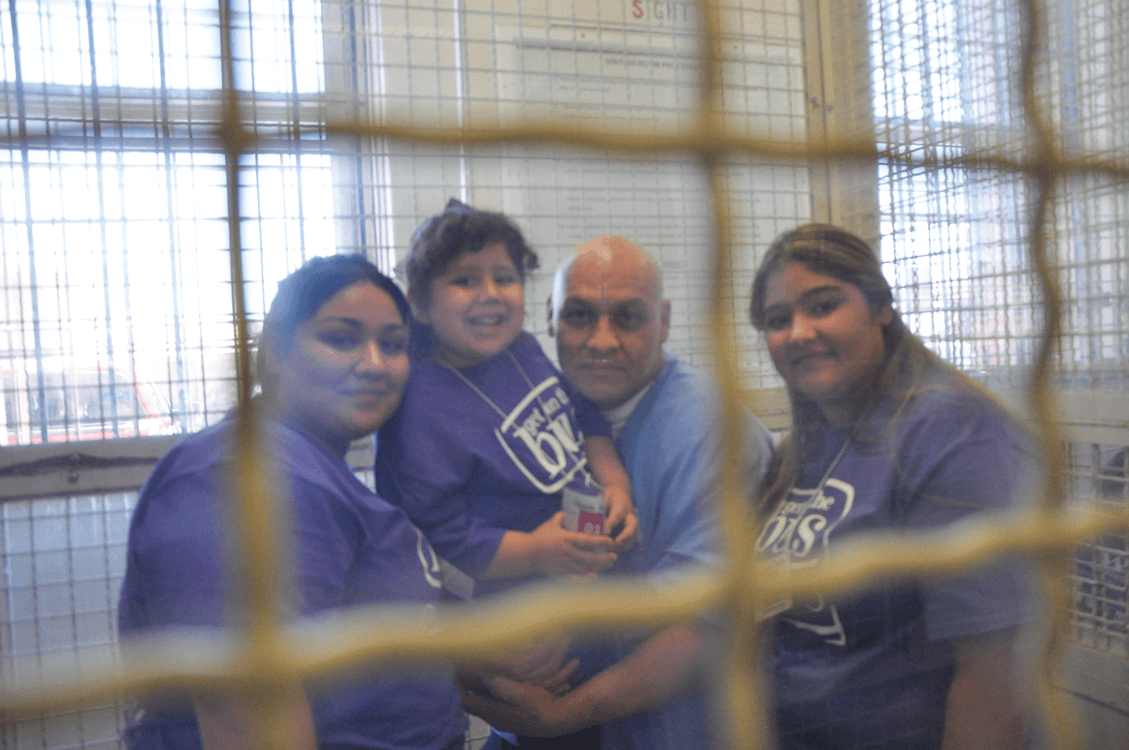 Inmate Christopher Jasso and Family at Get On The Bus, San Quentin State Prison, July 2017.

The 2017 visit was the first time his daughters, Anastasia Torres, 22, and Alisha Marlene-Torres, 21, have seen him. Alisha brought her 4-year-old daughter.

“With not being able to see my father in seven years has been challenging because my daughter needed to meet him,” Alisha said. “It’s been a great experience for her.”

Anastasia added, “I feel excited and lots of joy. I feel really happy to be here. Hopefully, the next time, we’ll drive up to see him.”

GOTB reports that more than 1.5 million children across America currently have a parent incarcerated. In addition, more than 5 million U.S. children have had an incarcerated parent, according to Parents Behind Bars: What Happens to Their Children.

Jamar Smith and his mom Pamela

Jamar Smith, 36, has been incarcerated for 14 years. He’s been at San Quentin since 2011. Smith’s mother, Pamela Dortch-Lee, lives in Los Angeles. She normally visits Smith once a year, but last year she wasn’t able to make the trip.

“It makes him feel like he’s wanted,” she said about why she travels so far to see her son. Her son said, “Seeing my mother, makes me feel human and like my family is there for me.”

Smith said getting his mother’s support keeps him out of trouble in prison and gives him an incentive to do more with his life.

Smith is getting out of prison around Christmas time.

Dortch-Lee talked about how difficult it is when her son misses events on the outside. “The hardest thing I had to do was telling him his father and grandfather died,” she said. Now she’s having health issues. “I’m just glad he’s coming home. He made a promise to his grandfather that he’ll take care of me.” Her son smiled and nodded in agreement when she added, “He tells me all the time, I’m sorry about being in here.” 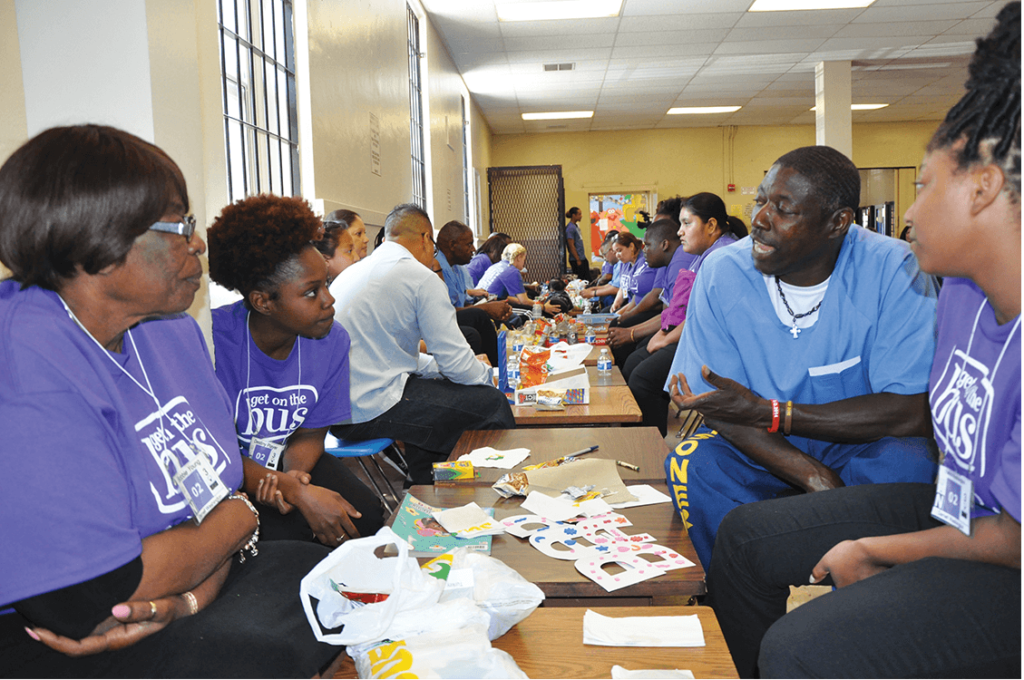 More than half of children whose parents are incarcerated live more than 100 miles from their parent, and 10 percent live more than 500 miles away, according to the U.S. Department of Justice, Bureau of Justice Statistics.

Visits from family and friends offer a means of establishing, maintaining or enhancing social support networks, according to a study by Minnesota Department of Corrections Research Director Grant Duwe.

The study found that visitation can reduce recidivism by maintaining prisoners’ social ties with family members and by helping prisoners develop new bonds with clergy or mentors. In doing so, offenders can sustain or broaden their social support networks.