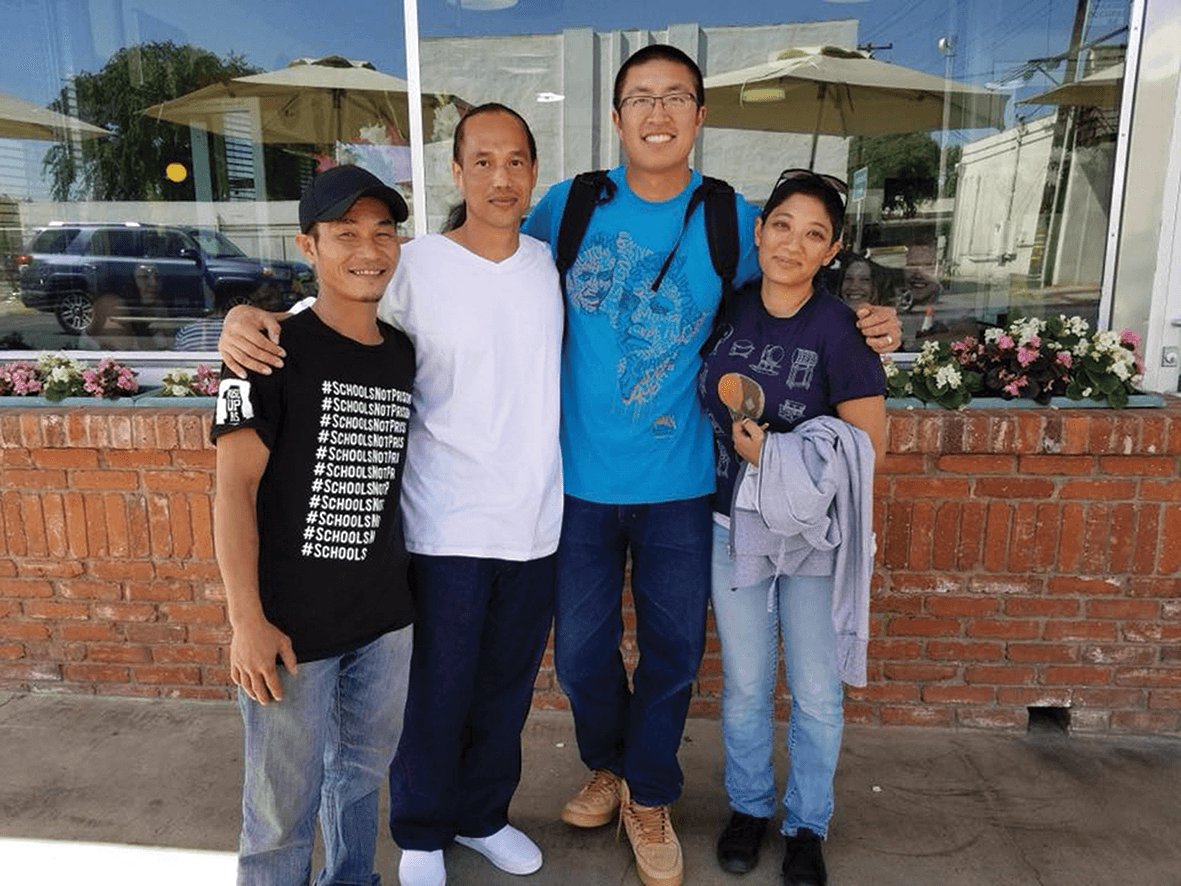 Borey (PJ) Ai has served his sentence in the California prison system, but he is not yet a free man. Even as he walks the streets of San Francisco and rejoins his family in Stockton, he can’t loosen up, can’t let his guard down.

“This could be temporary. Any day this could be taken away,” said Ai, who is under the supervision of Immigration and Customs Enforcement (ICE) and could at any time be deported to Cambodia, a country he has never set foot in. A black GPS ankle monitor sits just above his right Nike, sending his whereabouts to ICE officers.

Jonathan Simon, professor at the UC Berkeley Law School and a member of the Haas Institute’s Diversity and Democracy research cluster, says that most public attention has been focused on deportees who have committed non-violent crimes, but he believes that ex-offenders facing deportation after committing violent crimes deserve consideration if they have genuinely been rehabilitated.

“While his crime was serious and violent, he has undertaken the very hard work of recovery and earned parole at a time when that requires definitive evidence of remorse and rehabilitation,” Simon said in an email.

A few months before he was scheduled to be released, Ai got word that he had an immigration hold. As an undocumented immigrant who had committed a felony, he was likely to be deported. Before this news, he had had no idea that he was a citizen of Cambodia. He doesn’t speak Khmer and has no surviving family in the country. When he left San Quentin, ICE agents were at the gates waiting for him.

“I’m a permanent resident. I didn’t know about my immigration consequences at all until they came to pick me up,” Ai said.

Although Ai, 37, has Cambodian nationality, he was born in a Thai refugee camp in 1981 to parents who were fleeing the Khmer Rouge regime. When he was four, his parents relocated the family to Santa Ana, California, and from there north to Stockton. The area they settled in was marked by violence, and the Ai family spoke no English.

When he was in first grade, Ai saw his seven-year-old cousin and four other children shot to death in the Cleveland Elementary School mass shooting. “I never felt safe in America, but now I was numb to everything,” Ai said in a 2016 interview with San Quentin News.

The violence in Cambodia had traumatized his parents, and both suffered from PTSD. Ai said his father was a gambling and alcohol addict and his mother was overburdened with six kids to raise. Searching for community, Ai started running with a gang in Stockton at age 10. He was a full-fledged gang member by age 12.

Two years later, Ai was trying to impress older friends, and joined them when they asked him to rob a store with them. During the robbery, Ai said he killed the owner of the store. He turned himself in, was tried as an adult, and at age 14, he was sentenced to 25 years to life for second-degree murder with a gun enhancement. Ultimately, Ai served 20 years before he was deemed suitable for parole in 2016.

In prison, Ai became a model of rehabilitation, according to many prison staff. He became a leader in numerous volunteer programs, such as San Quentin’s SQUIRES, which mentors at-risk youth, and facilitated classes to help incarcerated men process trauma through programs like Restoring Our Original True Selves (ROOTS), Guiding Rage Into Power (GRIP) and Kid C.A.T., a program for juvenile offenders. He also started a chapter of Criminal Gang Members Anonymous (CGA) at San Quentin, and co-founded a leadership ambassador class.

Ai also became a California certified rape and crisis counselor with Bay Area Women Against Rape (Bay-WAR), a domestic violence counselor with GRIP, and a certified addiction treatment counselor. In addition, he appeared with other juvenile lifers in a 2015 documentary called The Mask You Live In which addresses the issue of masculinity. In prison, Ai thought of himself as a “community health advocate” and looked forward to continuing his work when he was released from San Quentin.

Ai’s case is not unique. It is one of many in a ramping up of deportations in recent months. In early April, 43 Cambodians, many of whom fled as children, were separated from their families and repatriated to Cambodia. According to The New York Times, ICE tracks 1,900 Cambodians who are subject to orders of removal from the United States. Since 2002, 600 Cambodians who were permanent residents have been sent back to Cambodia.

“A lot of people don’t realize that even if you’re a permanent resident that you can be deported,” Ai’s lawyer Jean Lantz, an immigration specialist, said. “Some of the compelling things about (Ai’s) story do not have legal significance to the immigration board.”

To Simon, these deportations amount to exile. “The real reason to reject deportation in such cases is that doing so is cruel and unusual punishment and disrespects human dignity,” he said. “To exile them from the only social world they have ever really known is to tear asunder the social ties and cultural knowledge that makes a truly human life possible”.

During the 18 months he was in ICE detention, Ai felt powerless, he said. Kept in Sacramento’s Rio Cosumnes Correctional Center, Ai says he was shocked and damaged by the center’s purposeful sleep deprivation tactics and inhospitable surroundings. He didn’t have opportunities to exercise or engage in the work that gave him purpose when at San Quentin. “It was physically and spiritually breaking me down,” he said.

Ai is on the outside because once his removal order became final, the government could only detain him if his removal was imminent. The government decided to release him until the time comes that ICE can deport him to Cambodia. His community, including the Asian Prisoner Support Committee (APSC), where he works as an intern, has rallied behind him. Although Ai’s community has worked to fight his removal order, they are running out of options. They have appealed the removal by the Immigration Board to a federal appeals court, arguing that his deportation would violate the Convention Against Torture treaty. Ai is also seeking clemency from the governor, which would remove the grounds for his removal from the U.S.

During the war, in order to survive, Ai’s mother and aunt were forced to become a part of the Khmer Rouge regime. He fears that that history would haunt him if he were to be sent to Cambodia, where the wounds of the war in Southeast Asia are still yet to heal.

‘Welcome Home!’ messages cover the Facebook page that Ai has set up for himself. There are messages from family and friends and people he has met along the way, wishing him luck and expressing eagerness to reconnect on the outside. His network is wide and composed of the formerly incarcerated, activists and family.

“This is my country,” PJ said. “I’ve lived here since I was four. I pledged allegiance to the flag when I was a kid. Sending me back is another punishment. I already did my time.”