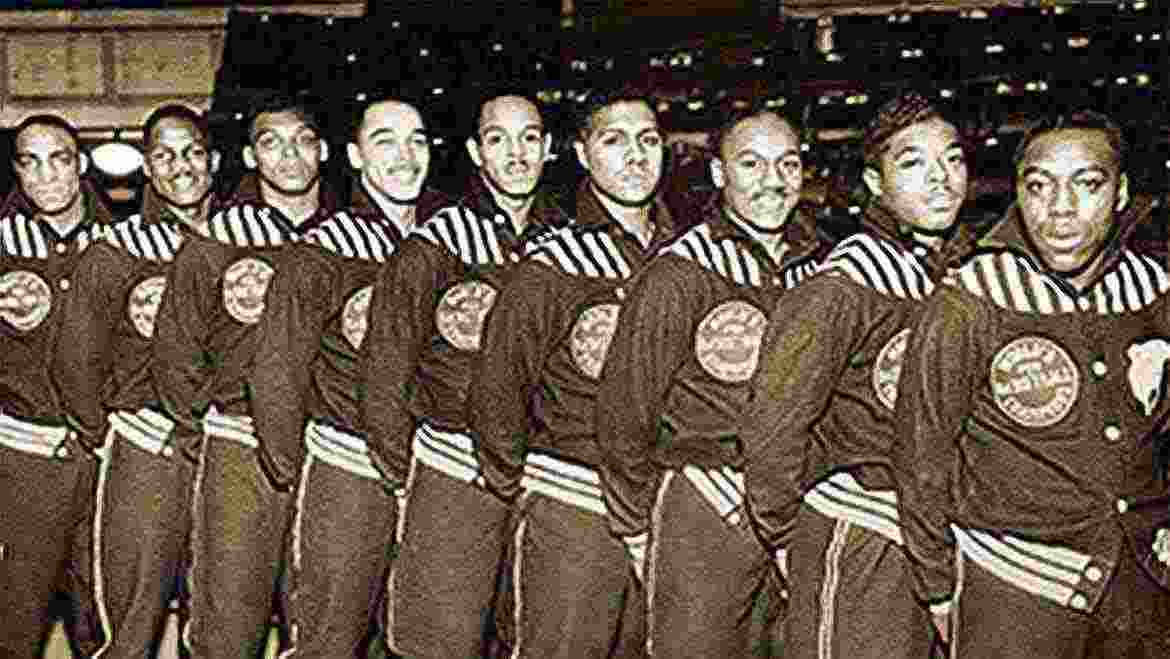 For Black History Month San Quentin hosted a Basketball Skills Challenge, where prisoners showcased their agility and coordination on the Lower Yard.

Montrel Vines and Brad “Reign Man” Shells pushed each other to the limit as they drew to a tie, completing the makeshift obstacle course with the time of 00:27.

“I knew I had this,” Shells said after the challenge. “We’ve been doing drills like this since high school days.”

Shells set the bar high by weaving flawlessly through the course on his final round, trash talking as he moved through each station. The obstacle course consisted of five stations, three rounds and a point system for a final shot. One shot: a three-pointer worth 25 points, a free throw worth 15, or a lay-up for 10.

The men then performed a two-handed chest pass to the opposite baseline, followed by a straight run to the free-throw line. The player had to make the shot to advance. After the shot they performed a bounce pass between two cones. The guys ran back to the opposite side of the court for the final shot.

Vines, unlike Shells, maneuvered through the course a bit slower, making sure he didn’t get penalized for missing cones. As he went to the free-throw line, everyone was watching on the edge of their seats to see if he’d sink it.

“If I didn’t make that first one, no way I catch my boy, you feel me?” Vines said.

Vines sank that first free throw and made the bounce pass; he sensed he was behind on the clock. He sprinted to the last station, grabbed the ball, and instead of going for a for sure lay-up, Vines—whose on-court nickname is “Pull Up, Splash” —jacked up a deep three-pointer that went in, shaving off the extra time on the bonus, ending the challenge with a tie.

In the first round, Shells had an opening time of 1:06. Vines bested that with a first-round time of 1:01. The competition began to heat up when Juan “The Gnat” Moreno took the lead with a time of 00:56 seconds.

Joshua “Quick” Burton took his turn but was hampered at the free-throw line, costing him valuable seconds, and finished with a first-round time of 1:38.

San Quentin News staff writer Marcus “Wali” Henderson went next, and the dreaded free-throw line became his enemy as well. He finished with 2:37.

The following rounds brought much faster times as the players were now familiar with the course, and each knew that making that first free-throw shot was crucial to getting a faster time.

And that’s how the small crowd found themselves involved as Shells and Vines battled the following two rounds, with Burton and Haines in a close third.

In the second round, Shells sank the first free-throw, hit the sprint and then made the lay-up, which erased 10 seconds from his time as a bonus, and was looking to win.

Both players received a six pack of Pepsi for their victory. The challenge was sponsored by members of the Islamic Community at San Quentin, who have also sponsored basketball, softball, volleyball and football games.

“We’re just giving back to the community,” Henderson said. “We, along with Graced Out Ministries (a Christian group) like to bring the message of peace, unity and fellowship out of the houses of worship and down to the yard, where the people are at, and meet them where they are.

“It’s always good to be among our brothers here at The Q, brothers meaning everyone on the yard, regardless of whatever categories we might place on ourselves,” Henderson added.

The challenge ended with handshakes and laughs to close the Feb. 17 event.