The Bay Area’s gypsy swing, band Beso Negro (Black Kiss) treated San Quentin prisoners to acoustic musical mastery at its Sept. 29 event, which was San Quentin’s final yard show of the year.
Loud applause and whistles greeted the group, as lead singer/guitarist Adam Roach’s piercing vocals opened the 90-minute set. Bassist Cheyenne Young, guitarist Eli Carlton-Pearson and drummer Ethan Turner filled out the ensemble.
“They were bad ass,” said inmate J. Esparza, who plays with the prison house band Continuum. “They were phenomenal. They were seasoned.
“Music brings out a lot of emotions and can touch people in different ways.”
Watched by a crowd of prisoners, Roach joked, “Thank y’all for coming,” before the band continued to merge musical genres, such as blues and country, folk/rock, salsa-soul and a dash of jazz.
Beso Negro provided more than a dazzling performance. The musicians left behind a set of concert speakers, paid for by a benefit show the group played for the prison music program.
The group, along with the band This Old Earthquake, rocked the Sweetwater Music Hall in 2014 to raise funds for the Williams James Assoc. Prison Arts Project and the San Quentin Music & Arts program.
“We packed that show,” Turner said. “It’s nice to give the musicians here the instruments they need to grow.”

In fact, “Grow” was one of the tunes the band performed at the yard show. The song had a thumping baseline with a bluesy feel. Carlton-Pearson and Roach traded guitar riffs that mimicked a piano key- board synthesizer that gave off sounds of bells and space-age notes.
“We’ve been playing together for so long that I can play a chord high and he can play low and we can create these differ- ent sounds,” Roach said.
The group performed “Down to the Water,” a slow song with the flavor of a down- home country folk tale sautéed in vintage soul music.
“I’m going down—down to the water and I’m not coming back,” Roach crooned, as the listeners bowed their heads in reflection.
“This was my lifelong dream, to play here,” Roach said. “I feel happy to leave this as a mark on my musical career.”
Roach cites Johnny Cash, B.B. King and other legends who have played in San Quentin or Old Folsom. The band sang “Folsom Prison Blues,” paying tribute to the 60th anniversary of Cash’s iconic 1968 concert in San Quentin.
“[Roach] is talking about doing a prison tour,” Turner said.

The band performed “Scrambled Eggs,” which threw the crowd into a frenzy. The energetic mixture of Gypsy jazz and rock had some prisoners waving their gray beanies in the air.
I thought I left it all behind /I see the grind of their feet/I thought I loosened the noose / they’re waiting for me to falter / but here I go again,” Roach sang.
Bassist Young’s thin fingers danced around the slim upright instrument and laid down an infectious bass line. The crowd responded with whistles and head nods.
“I have been playing since age 9 and I don’t read music. I play from my soul,” Young said. “This was pure nostalgia. I feel blessed for making the good musical choices that led me here today.
“I wish we could play here more,” Young added.
Beso Negro’s spiritual blend of English and Spanish served up a high dose of creativity that put them in a league of their own.
“We thank Raphaele [Casale] for making this happen— she is amazing,” Roach said.
Casale is San Quentin’s Music Program sponsor and works in the Warden’s office.
After the show, the musicians signed autographs for their incarcerated fans. Many of the participants in the prison music program thanked the group for raising the money for their equipment.
The group’s song “C’est la Vie”—“That’s life”—captured the emotions of the day.
“If this is the last time that I see your face/I will take a trip—if only in my mind—just to see you again.” 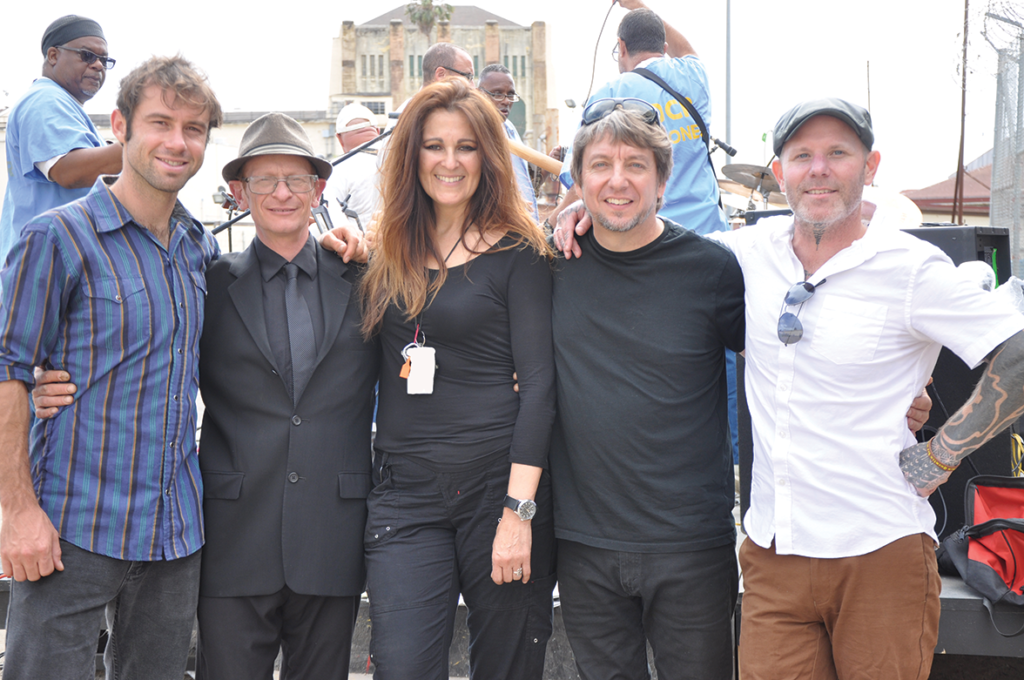