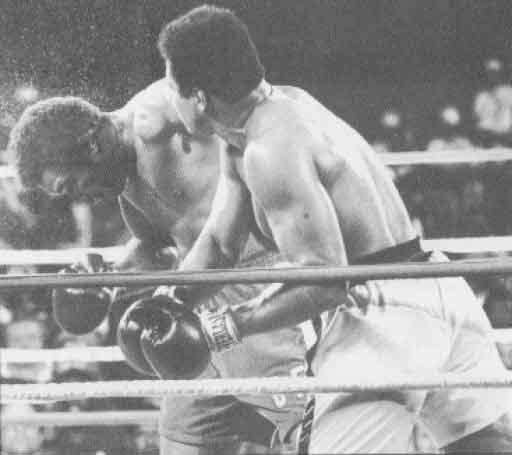 George Foreman and Muhammad Ali (circa 1974)

Muhammad Ali risked going to prison during the prime years of his boxing career to stand up for his beliefs. The fight for equality didn’t end after his last heavyweight match; he dedicated his retirement to continuing the struggle. Ali died on June 3, 2016 at age 74, but his achievements still affect the lives of many, including incarcerated people.

“Ali was the greatest,” said incarcerated boxing enthusiast Perry Simpson. “He was a father figure, an uncle figure — someone to look up to. His history speaks for itself. His strength and character, the way he stuck to things, and all the stuff he went through during the times he went through them. He was a real-life superman.”

In 1964, at 22 years old, Ali became one of the youngest heavyweight champions by defeating Sonny Liston. Two years later, Ali took on the United States government when the army called on him to serve  in the Vietnam War.

“War is against the teachings of the Qur’an,” said Ali. “I’m not trying to dodge the draft. Why should they ask me to put on a uniform and go ten-thousand miles from home and drop bombs and bullets on Brown people in Vietnam while so-called Negro people in Louisville are treated like dogs and denied simple human rights?”

The government arrested Ali, found him guilty of draft evasion and stripped him of his boxing titles and licenses. Ali didn’t fight again for nearly four years, from ages 25-29, according to Wikipedia.

“I really believe we missed seeing him develop a whole lot of his skill level,” said Perry. “We didn’t get to see those prime years. That was a tragedy to all who loved him.”

Ali remained free pending appeal of the court’s decision overturning his conviction in 1971. Ali regained the heavyweight title at age 32 by beating George Foreman in “The Rumble in the Jungle” on Oct. 30, 1974.

“Youngsters are looking at him and they see a man they should be, could be and ought to be”

Long after Ali’s last round, he is still remembered at San Quentin State Prison. In 2014, one of Ali’s robes was donated to Guiding Rage Into Power (GRIP), a program aimed at helping people stop their violence. Called the “Victory Robe,” it is awarded to someone in the program who has overcome challenges and is deeply dedicated to serving the community.

Every year the robe passes on to the new recipient whose name is embroidered in gold on it, right under the name of the past honorees Robin Guillen, Jenny Lyons and Melissa Davis. Outstanding work facilitating the GRIP program wins the award. The honorees come from diverse backgrounds. Guillen is incarcerated. Lyons was a victim of crime and Davis, of the Marin County Probation Department, teaches domestic violence prevention.

“They may be ordinary people, but they’re still the greatest,” said GRIP founder Jacques Verduin.

The robe honoring an ambassador of peace reflects Ali’s principles. After the Sept. 11 attacks in 2001, Ali stated, “Islam is a religion of peace” and “does not promote terrorism or killing people.”

After Ali retired from boxing in 1981, he got “ready to meet God” by aiding charitable causes and working for peace around the world.

Part of that charity included visiting California Rehabilitation Center (CRC) in 1985. While there, he signed autographs and demonstrated magic tricks for the women prisoners.

Next, Ali went to the men’s side of CRC where he offered noon prayers with the Muslim community, then went to the gym where he boxed with an incarcerated man. He also donated 200 books.

Ali was a big influence on hip-hop music. According to Rolling Stone, his “freestyle skills  …  rhymes, flow, and braggadocio” would “one day become typical of old school MCs” such as Run D.M.C. and LL Cool J.

Ali used rhyme schemes in spoken word poetry, political activism and trash talked opponents long before The Last Poets in 1968, Gil Scott Heron in 1970 or Rapper’s Delight, the first Hip Hop record in late 1970s. In 1963, Ali released an album of spoken word music on Columbia Records titled I Am the Greatest.

Ali used his lyrical skill to fight against injustice. He wrote a poem, speaking out against what happened when then-New York Gov. Nelson Rockefeller called in the National Guard and state police to retake Attica Prison from incarcerated men protesting their conditions. When the turmoil ended, 33 prisoners and 10 correctional employees were dead, according to Blood in the Water (2016) by Heather Ann Thompson.

“To die fighting to be free, what better ending could there be,” said Ali. “They opened fire on us, but they died telling it like it was.”

Ali fought past medical advice from his doctor Ferdie Pacheco, who advised him to retire in 1977. He ended his career with back-to-back losses to Larry Holmes in 1980 and Trevor Berbick in 1981, with a record of 61 fights, 56 wins, 37 by knockout, and 5 losses.

In 1984, Ali was diagnosed with Parkinson’s disease, which some experts believe can result from head trauma.

A respiratory illness hospitalized Ali on June 2, 2016. He died the following day from septic shock.

Immediately following Ali’s death, he trended as the number one topic on Twitter for 12 hours and on Facebook for days. ESPN, CNN, BBC, Fox News, and ABC News covered him extensively and BET aired Muhammad Ali: Made In Miami.

“Ali’s death is a great loss, but it’s a rebirth too because now the light has been shined on him and the things he did in his life are coming back full circle,” said Perry. “Youngsters are looking at him and they see a man they should be, could be and ought to be.”