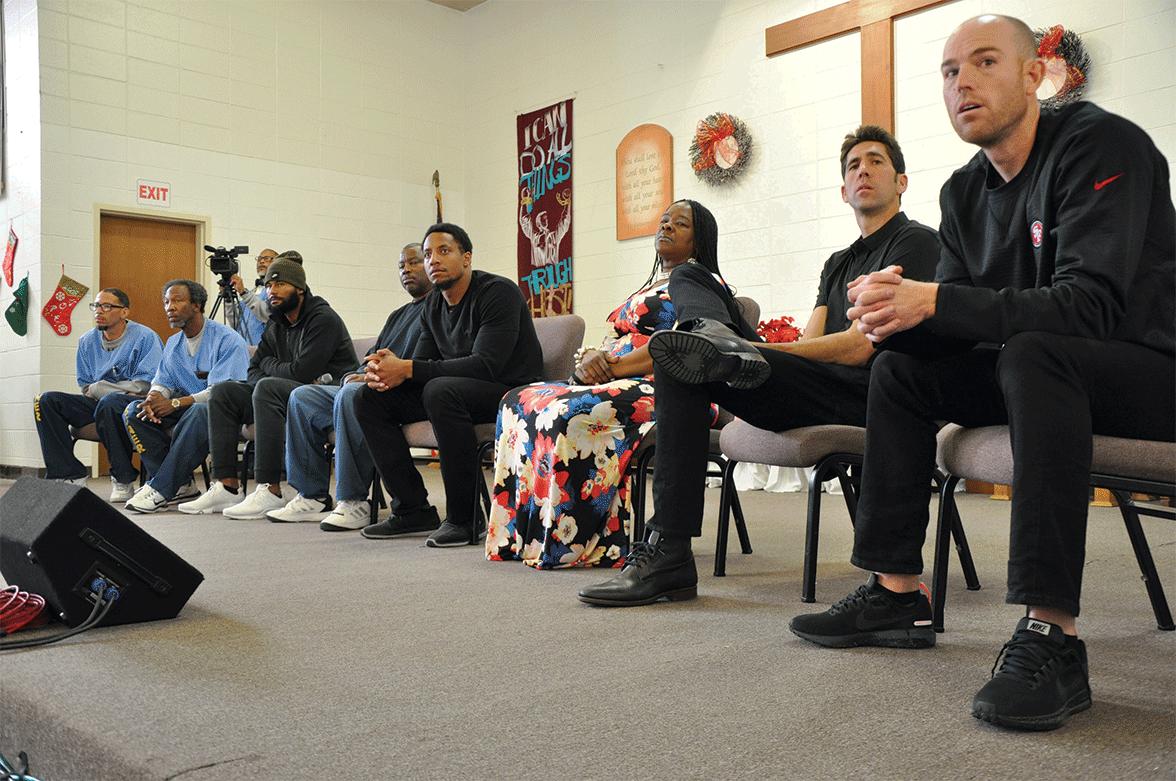 A roundtable centering on social justice inequalities in America took place Dec. 12 between two unlikely groups at the most unlikely place.

Earl Smith, San Francisco 49ers pastor, led a team of Bay Area sports personalities into San Quentin State Prison for a discussion with an audience of about 100 people, including inmates, community volunteers and prison staffers.

A major topic — the challenges athletes face when speaking publicly about mass incarceration and racism.

To protest the treatment of Blacks in America, 49er safety Eric Reid took a knee during the national anthem, along with ex-49er quarterback Colin Kaepernick. He didn’t want Kaepernick’s message to be misunderstood.

Reid continued that his mother and cousins, who served in the U.S. military, do not feel disrespected by his peaceful protest. 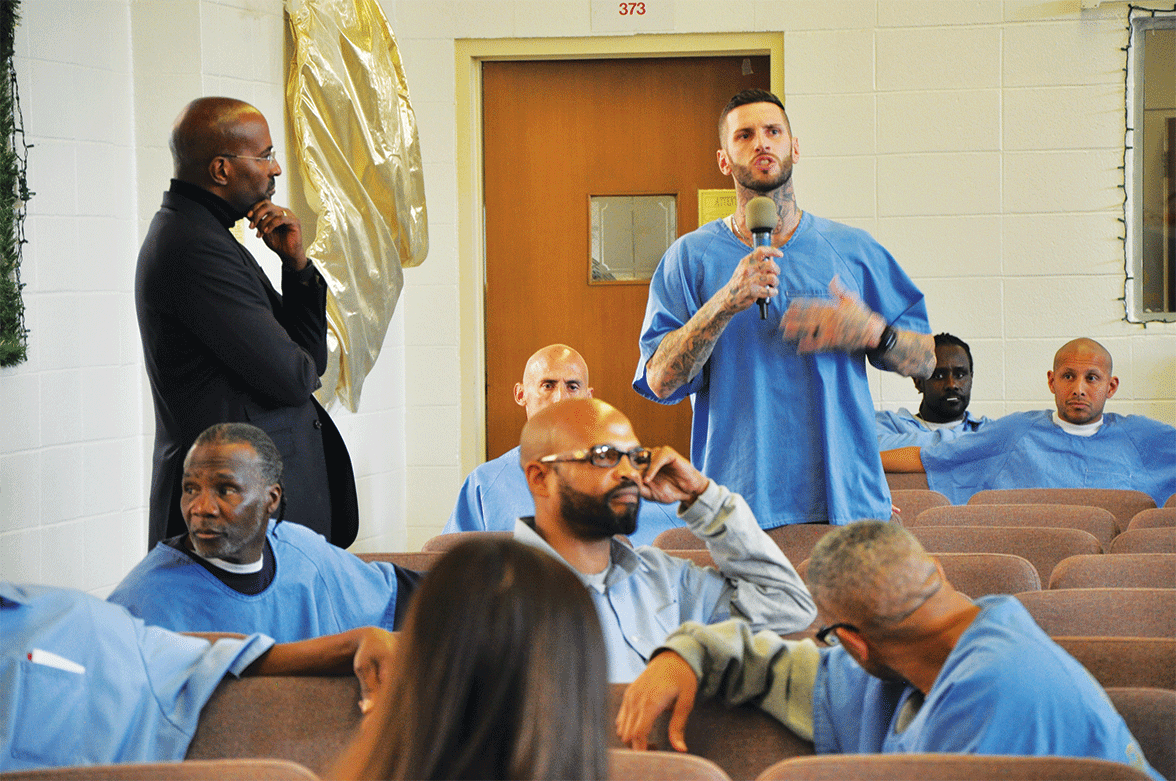 The Arnulfo T. Garcia Sports and Social Justice Roundtable was moderated by Van Jones, a CNN political commentator and author of Beyond the Messy Truth: How We Came Apart, How We Come Together, (2017).

Jones founded #Cut50 in 2015, an organization aimed at reducing the U.S. prison population in half by 2050. 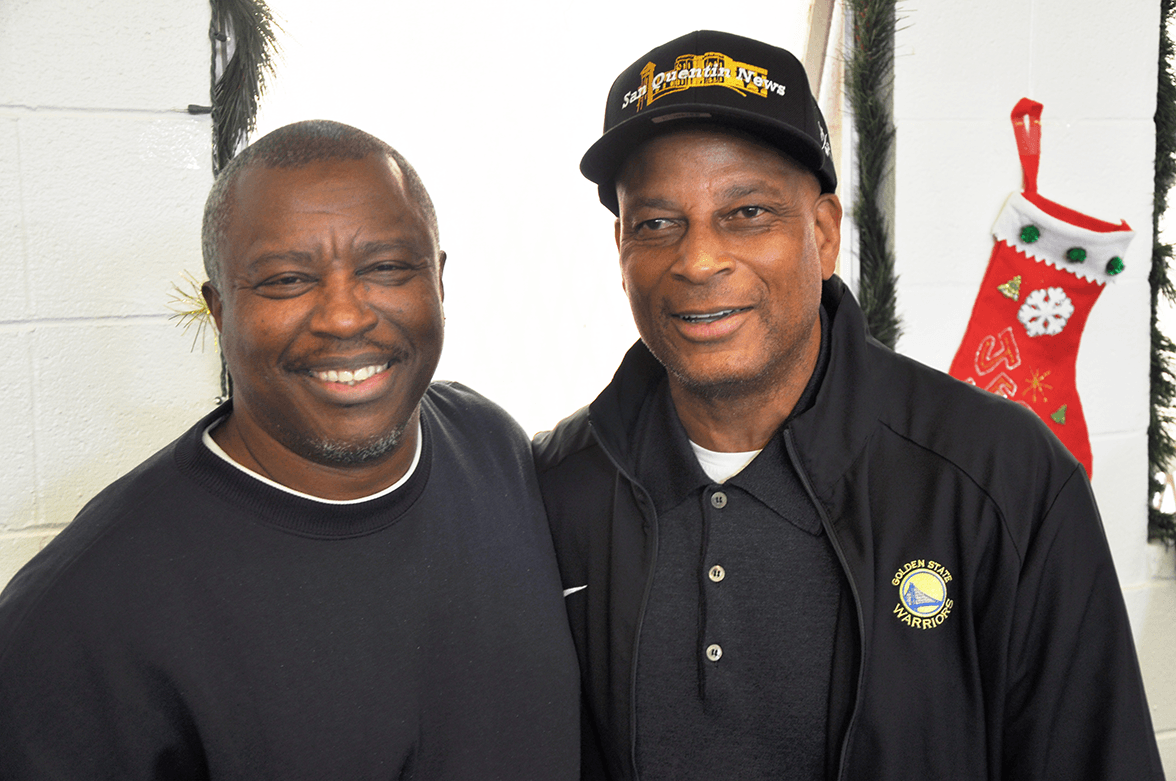 He opened the roundtable, talking about the huge platform today’s athletes have, and said the “urgency of now” calls for addressing current social injustices, similar to the Civil War, women’s suffrage, anti-war movements and the 1960s Civil Rights Movement.

“We came out of each of these better people,” Edwards said.

Edwards called for free people to go inside prisons and talk to incarcerated people about the impact of mass incarceration.

Since 2012, Myers has been bringing members of his staff into San Quentin to play basketball.

People don’t understand why he comes inside a prison.

“I tell them that the people I interact with are all good people,” Myers said about the inmates he plays ball with, adding it has been a chance for him to open his eyes. “Each time I come here, I leave more educated.”

Thomas told the athletes, “Coming in here shows that somebody cares — somebody’s shaking it up. We have a little of that kind of power at San Quentin News, but you guys have a mega-horn.” 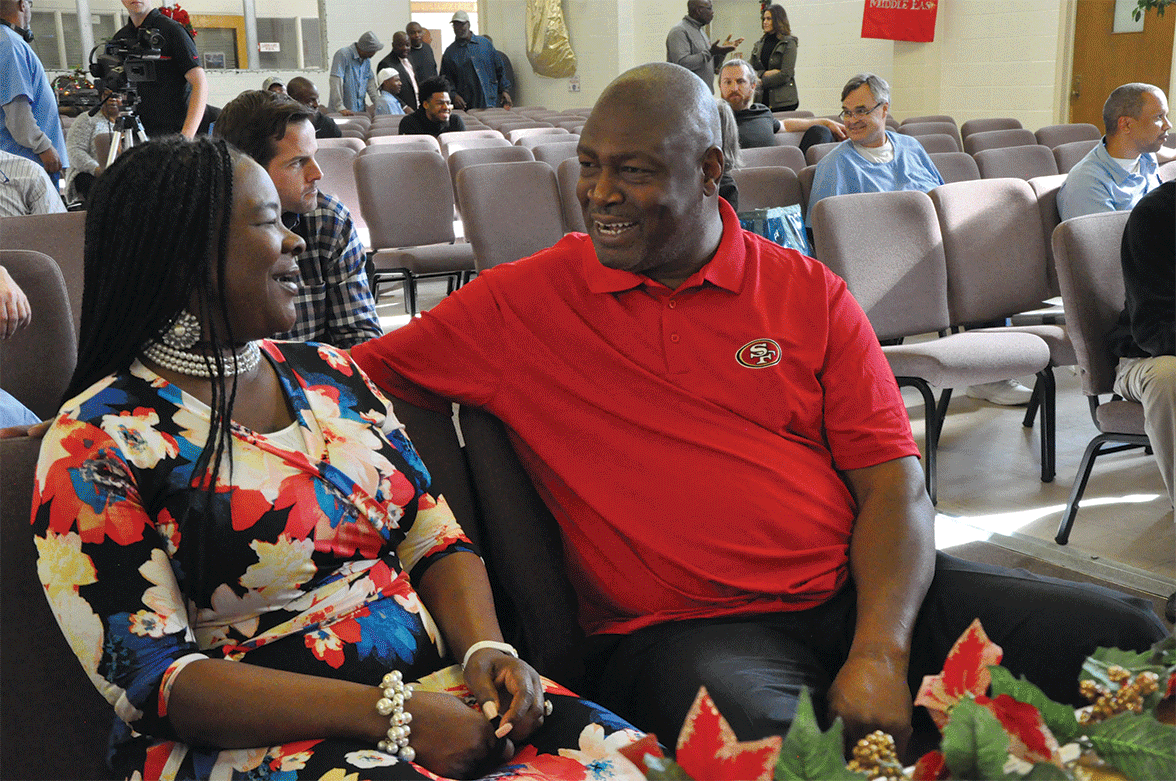 The Challenges of Race Relations

“I didn’t have to deal with a community where somebody got shot,” said Myers. “Nobody in my community went to prison. I always ask myself, ‘If one of these guys grew up where I did, would they be running the Warriors?’”

“If that happened to me 10 years ago, I’d still be pissed off,” Myers said.

Myers told a story about being 18 years old and in a college locker room:

“I saw Black guys putting lotion on their legs. I’d never seen that, so I asked them what they were doing. They told me they didn’t want to be ashy. I didn’t know what being ashy was. Then I asked one of my Black friends if he wants to use my razor. He told me that he couldn’t use a razor because it would give him bumps. I don’t have a clue about being Black.”

He challenged Blacks and Whites to interact better and closer:

“It’s about unity. We have to walk past each other on the streets and see each other like seeing a friend.”

“We need to continue to meet people like Bob Myers, who walk across the bridge. If the roles were reversed, I question myself, ‘Would I do the same thing as Bob Myers?’”

Murphy said although there’s more work to do to end racism and stereotypes, “We’re headed in the right direction.”

Taylor challenged the audience to rely upon themselves and not on the government to bring unity.

“When we have this conversation, we need to be honest,” Taylor said, emphasizing that Black people cannot have a conversation about race while pointing an accusatory finger at the other person.

—Rahsaan Thomas contributed to this story

Golden State Warriors come back to the Lower Yard