An expert on addiction asked an audience of 200 in the Protestant Chapel if they were addicted to anything. Nearly every hand went up.

Addictive behaviors and how to heal old pains were subjects of discussion on Aug. 31, when Dr. Gabor Maté visited San Quentin State Prison.

Addiction to opioids, alcohol and tobacco are huge problems in our society, Maté told the audience. He added that addiction is when a person finds pleasure in anything, but suffers long-term negative effects.

The solution to addictive behavior, according to Maté: find out what’s going on in the family or community.

“Just Say No” to drugs was a slogan developed by Nancy Reagan, Maté said. “Those who engaged in drug abuse or addictive behaviors were seen as failures, derelicts, or making bad choices.

“Society’s response: the person is a criminal and needs a ‘time out’ that lasts 20 to 30 years in prison, because we don’t want your kind in society.” 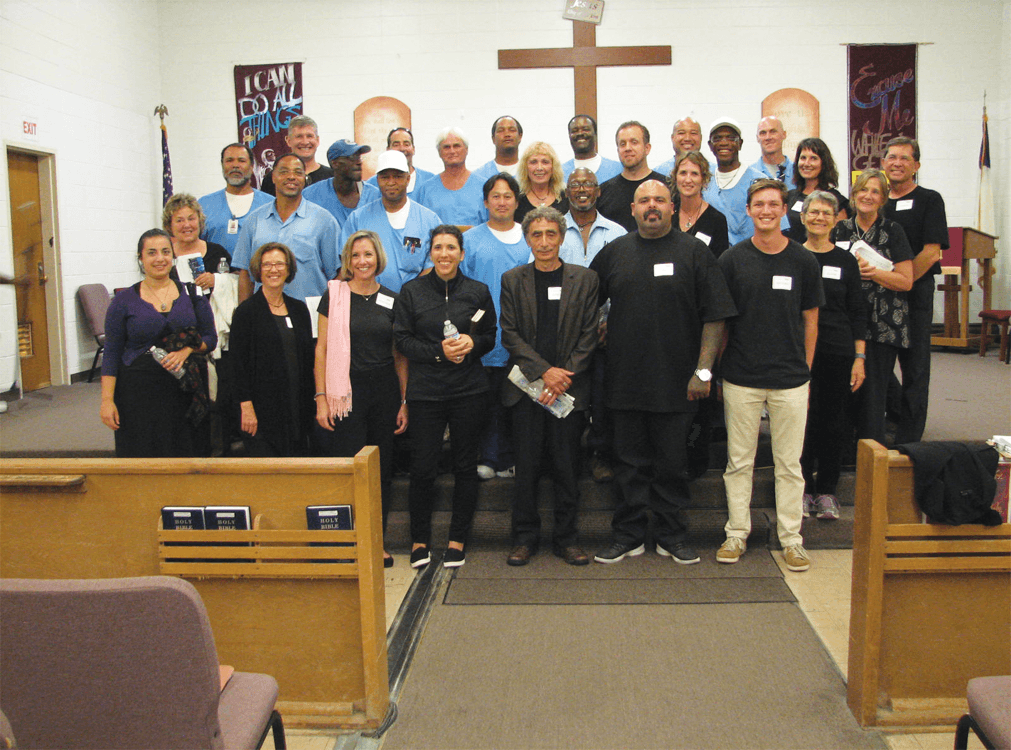 Dr. Gabor Maté with the facilitators and participants of the Enneagram group

“Every fourth person incarcerated on Earth is in jail or prison in the land of the free,” Maté said.

More than 2.3 million people are locked up in America and three out of four have a drug connection, research shows.

“And today, drugs are here more than ever, while at the same time, U.S. Attorney General Jeff Sessions wants to go back to the 1980s and ’90s — more of the same called for by Nancy Reagan,” Maté said.

“Ask, ‘Why?’ Why are people doing these things when they are seeing that their friends are dying?”

Much of the current research regarding addiction finds that it is a disease that affects the brain.

Opioids have a physical attraction to brain cells—they fit perfectly into brain receptors.

“Our bodies seek these kinds of substances, naturally,” Maté said. “Opioids drown out pain when the pain is too much. Opioids also activate the pleasure centers of the brain. We are social beings and need social attachments; opioids help us, in this regard, to connect with other people.” Returning to Nancy Reagan’s philosophy won’t work, he said.

The problem, according to Maté, is that addicts have poor impulse control.

The good news is the brain can be rewired against addictions. “The essences of this recovery come from individuals discovering our ‘true selves.’ It’s about reconnecting to ourselves.”

“Finding yourself when you are so addicted is not a study, it’s a practice”

“We all are hiding from something,” Soto said. “It took me 36 years to figure it out.”

Soto is an addiction recovery counselor in Arizona. He said he grew up on the drug-infested streets of San Jose. A dysfunctional family taught him to hate people, and from there, he lost sight of himself. “I didn’t know how to smile for 25 years.”

He said he started listening to himself after reading The Wisdom of the Enneagram: The Complete Guide to Psychological and Spiritual Growth for the Nine Personality Types, by Don Richard Riso and Russ Hudson.

The last four-and-a-half years have been his path back to rediscovery and retaking control of his life.

“It’s very hard to change your life when you’re in prison, but when you do, it’s the truest form of transformation, because nobody wants to be here,” Soto said. “Finding yourself when you are so addicted is not a study, it’s a practice.”

Maté was invited by incarcerated men and community volunteers involved in the Enneagram Prison Project (EPP).

EPP aims to show incarcerated participants which of the nine personality types they most resemble. The categories are specific, such as the Individualist, the Peacemaker, the Reformer. Grasping the impact of personality type encourages healthier life choices, EPP believes.