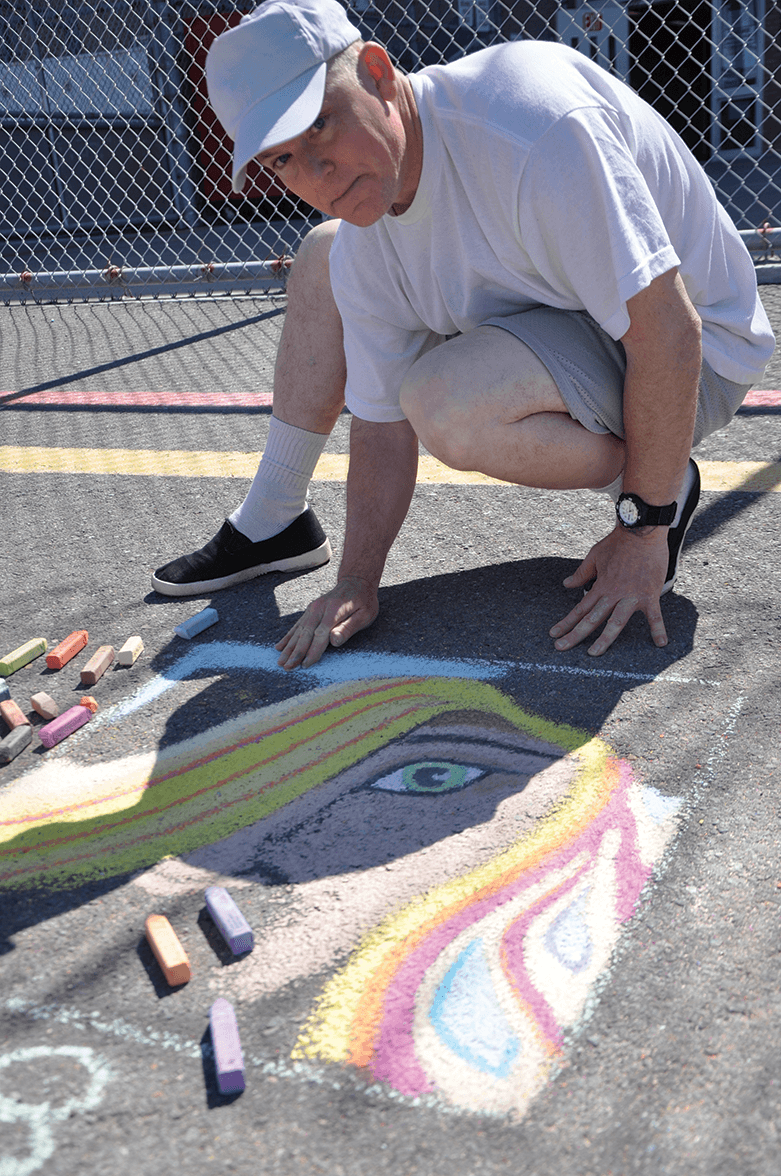 After nine days of quarantine, San Quentin celebrated its eighth Day of Peace on May 19. Live bands on a makeshift stage played classic rock, reggae and rhythm & blues to entertain hundreds of inmates as they mingled with dozens of community members and prison staffers. Several artists drew their interpretations of peace in a sidewalk art contest.

“This day is beautiful. It’s amazing. The band is good. The music is good. Smiling, everyone can get together and live in peace,” said Pat Mesiti-Miller, an outside sound-designer for the podcast Ear Hustle. “It’s amazing that this can happen in a prison — having positive energy in a place like this is important.”

After a race riot on San Quentin’s Lower Yard in 2006, a group of men, many serving life sentences, came together with the goal of stemming violence inside the prison. The administration supported the anti-violence message and approved the Day of Peace committee.

“It’s a powerful gathering with a group of people that have a deep understanding of peacemaking processes rather than just a punitive system and responding to harm,” said Danica Rodarmel, who works with San Quentin’s Restorative Justice.

Tables were set up on the prison’s Lower Yard promoting the various self-help groups available for the incarcerated men.

Rev. Bill Englehart sat at a table for The Work. He passed out leaflets describing what The Work has to offer: Participants have the opportunity to learn specific skills such as reflective listening, cooperation, conflict resolution, accountability, tolerance, forgiveness and facilitation skills. Englehart co-facilitates the group with Lisa Starbird.

“It’s really authentic sharing in a confidential setting where the men could share their challenges and victories. The environment is multi-ethnic, spiritual and racial,” said Englehart. “The men in this group are dedicated to understanding themselves, being authentic in a way that is reflective of what you would find in a monastery.”

Black, surveying the multiple self-help stations, said that it was the first time he’d seen an event like Day of Peace.

Items donated by Walkenhorst ‘s for the Day of Peace

“This shows a better side of the pen,” Black said. “It shows when I get out, I can further my education or get a job.”

Black said the atmosphere made him feel like a human being.

While standing in the crowd, Deyanco Blavin, a 25-year-old personal trainer, said he has mixed emotions.

It was Blavin’s first time stepping inside a prison.

He compared the yard to a plantation and said, “I feel anger and sadness. I see myself. I want to help. I would offer love and support. I would make this more of a community.”

Dmari Pierceson, previously incarcerated at Duel Vocational Institution (DVI), said Day of Peace wouldn’t happen there because “at DVI people don’t care,” he added, “If they had more activities and programs, it may be possible.”

Volunteers exchanging views on the self-help programs offered at SQ

Pierceson looked around the yard and commented on people from different ethnic groups and areas of California “getting along.”

Jeremiah Lee Sr. said he thought a Day of Peace could have taken place in San Joaquin County Jail, but wondered, “Who’s willing to take that first step?” He added, “A smart man learns from his mistakes, but a wise man learns from the mistakes of others.”

“When I first got, here, I was amazed by all the free staff and programs,” Young said.

Young walked the yard, handing out roses. For the past 18 years, he’s made roses out of soap bars. He tints and shades them with colored pencils.

“I got into Alliance for Change, Men Creating Peace and Narcotics Anonymous. With all the programs offered by CDCR, there’s an avenue for change,” Young said. “I’ve never seen anything like this ever, in my 23 years of being locked up.”

Walkenhorst’s Natalie Tovar showed up for a fifth time at the Day of Peace.

Gathering crowd enjoying music at the Day of Peace

“I feel like I have a connection with the people from sponsoring and encouraging the programs behind the walls,” Tovar said.

“These groups help me to realize how distorted my thinking was growing up — that violence was the norm and how misguided I was,” Ross said.

There was a sidewalk chalk art contest judged by Arts in Corrections instructor Patrick Mahoney.

“You can tell how peaceful a person is by their eyes,” Rives said. “It’s the window to the soul—eyes inspire us deeply, especially when you look into a loved one’s eyes.”

Tiner, 33, hails from Yuba City. He’s been at San Quentin one week.

“It’s a peaceful drawing that came straight out of my heart,” Tiner said.  “We don’t have to hate. The simplest gestures on Earth can be done to give hope to people who are lost.”

Hip-Hop Artists Locked Out For Second Time at S.Q.’s Day of Peace Event