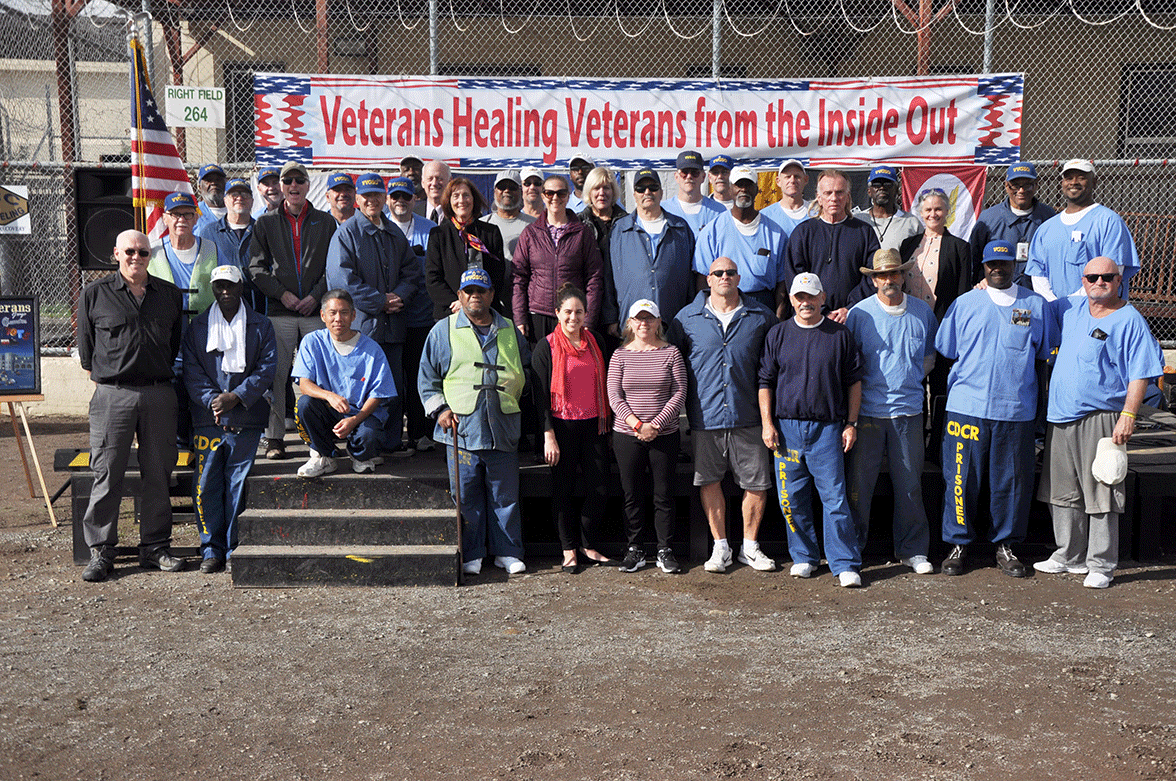 Every year, the 11th day of the 11th month in the United States commemorates Veterans Day. It was no different in San Quentin for the more than 350 incarcerated men who once served in America’s armed forces.

Nearly a dozen community supporters ventured inside the prison to pay their respect with about 50 of the incarcerated veterans who gathered in front of a stage set on the prison’s Lower Yard.

The tribute began early Saturday morning with 1970s music blaring and the smell of burning wood coming from the Native Americans’ sacred grounds.

In the distance, inmates played a pick-up basketball game against the Lincoln Hill Community Church. Across the yard, UC San Francisco Dons joined a match with the prison tennis team.

Meanwhile, on stage, the incarcerated veterans, many with combat experience in wars from Vietnam to Afghanistan, readied themselves to tell stories about their military experience.

First, though, everyone in the yard stood at attention as the national anthem played. All the veterans saluted the flag as the civilians and correctional officers held their right hands over their hearts.

At the conclusion of the national anthem, someone from the Native Americans’ sacred grounds yelled the Marines’, “oorah,” which brought several whistles and an applause.

The tone of the event ranged from joyous to solemn.

“This is a very hard day for me,” said veteran Eric Davidson with his head hung as he earnestly recalled his service. Davison served across the globe in the 1st Marine Division and 1st Force Recon Battalion from 1988 to 1998.

“Veterans Day honors all American veterans, both living and dead,” Nelson said. “In fact, Veterans Day is intended to thank living veterans’ dedicated and loyal service to their country. The biggest national debt is not government spending or federal deficits, but that debt America owes to these veterans.”

David “Solo” Bennet, who emceed the Seventh Annual Veterans Healing Veterans From the Inside Out Veterans Day celebration, said, “I consider myself as an advocate and a helper.”

He added: “As a human being it is my responsibility to give back and pay forward the help and assistance given to me by people in my past.”

“It showed all the trauma and horrors of the battles,” Martin said as he read about what it meant to be a soldier during the Vietnam era.

“I will not be explicit because after 50 years, the horror is still there,” Martin said.

Dennis Barnes served in Vietnam between 1967 and 1973. He did three combat tours.

“At this very moment, men and women are serving around the world under all kinds of weather. They are vigilant and of all races looking out for our freedoms. Be proud of them. We can complain about all kinds of things, but be thankful for our veterans — remember America needs you.”

“The survival of democracy depends on the sacrifice of veterans,” said James “Shorty” Dunbar, clerk for the veterans program. “The most cherished wish of all veterans is for peace.”

The program’s chairman, Gary Cooper, summed up the sentiment for many of the incarcerated veterans, “War, what is it good for? Absolutely nothing, and that’s true. I will always be a veteran, before I am an inmate.”

Tina Rutsch has been visiting San Quentin for about two years to help veterans to tell their stories through theatrical performances.

She said the experience of having the honor of laying a wreath on the Tomb of the Unknown Soldier as a teenager was impactful to her.

“Since then, I’ve always had an interest in veterans, but my path went to the theater,” she said. Years later, an experience with Marin Shakespeare Company gave her the chance to come inside San Quentin and work with incarcerated veterans.

She is currently recruiting incarcerated men for her next theater production.

“I’m excited. It is the third year for the Veterans Theater through Marin Shakespeare. We take ideas that the veterans have and share stories and experiences. We then connect shared stories and we talk and listen to each other to come up with the performance. We want to include all voices, veteran or not.”

Emcee Bennet said, “I get great pleasure in making others feel better about themselves. Playing an intimate part in putting on the Veterans Day ceremony was very fulfilling in that it brought together people from different walks of life and even from different generations.”

Reflections of a veteran: Davis Bennett