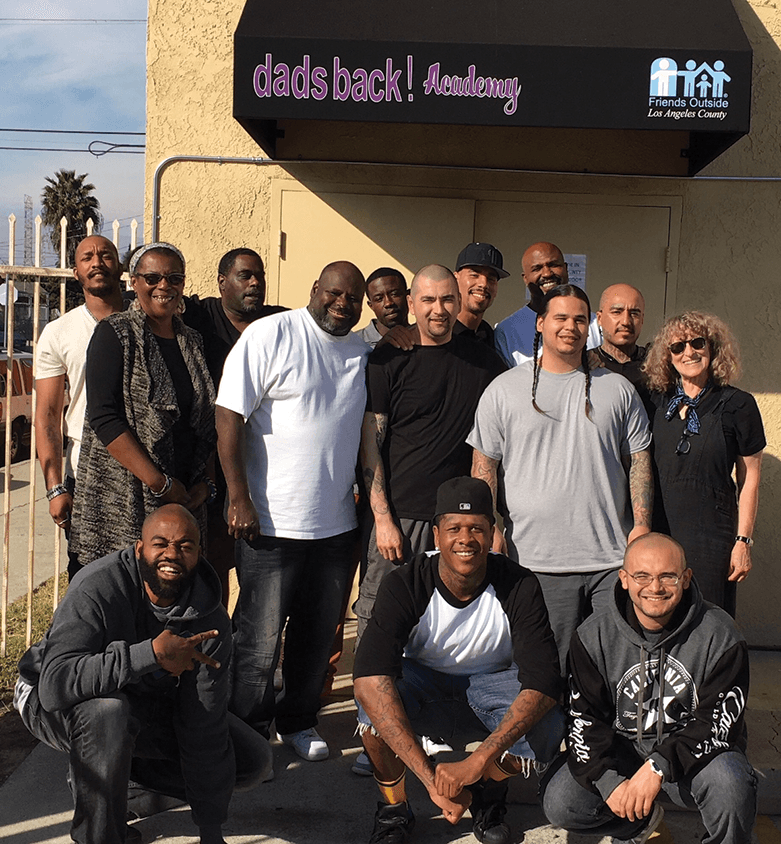 From the prison to the streets, the transformation of a man. That’s the subject of “A Man Like Me” – a play created by four former prisoners taking advantage of “The Dads Back!” Academy and TheatreWorkers Project.

The academy is a reentry organization, run by Friends Outside Los Angeles County (FOLA), using theater to reintegrate parolees and formerly incarcerated men back into society. The arts program is run in partnership with the TheatreWorkers Project, which provides theater workshops called “Moving Forward” twice a month, mostly in Southern California.

“A Man Like Me” is performed by some of the academy members for peers, at-risk youth, families, and the public. Two of the authors perform, but the other two dropped out when they found employment.

“It’s one of the double-edged swords because their reentry was successful, but for us it was like “Oh, what are we gonna do?” said Tanner.

“So we replaced them for the performance component. We replaced them with two actors but all of the material was created by the men, and it was then fashioned into a play by a professional playwright.” 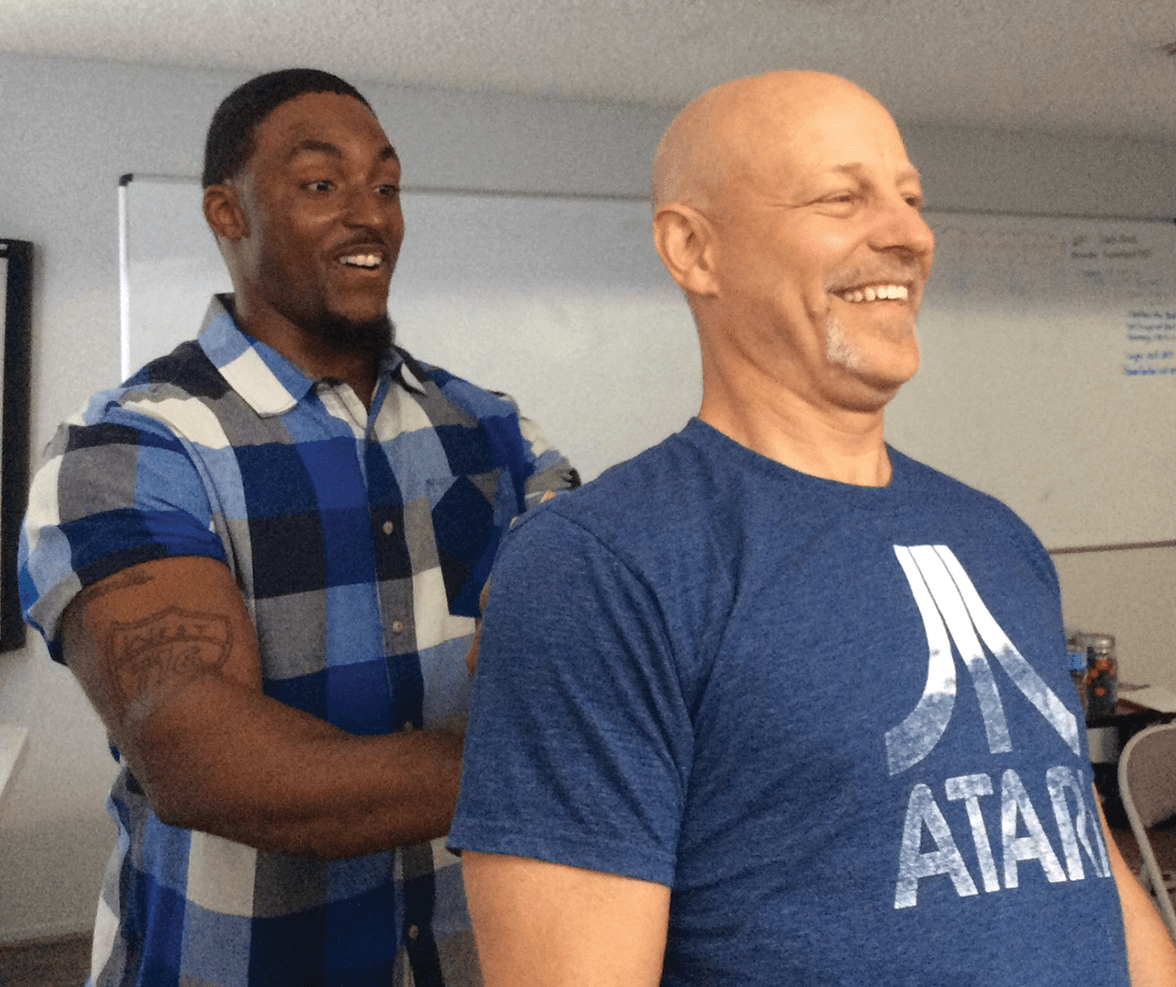 Tanner has visited San Quentin for an art exhibit and some theater performances.

“I was so moved and impressed by the work that Amy Dowling does [at San Quentin] with her Artistic Ensemble and also what Marin Shakespeare Company does,” said Tanner. “It really made me even more committed to wanting to continue to do this kind of work, because I find it transformative for myself as an artist; but I also see how working on a creative project with other human beings changes people no matter who they are.”

The Dads Back Academy has extended its workshop series to include three women who are alums of the academy.

“The material is going to be generated by the women,” said Tanner. “It will be their stories. Two of the men who were in the original performance piece that we did are going to join during the rehearsal process and they’re going to be playing some of the male voices that may emerge.”

The Dads Back Academy offers more than the theater program. They have job readiness workshops, substance abuse treatment programs and a “Parole to Payroll”  program that includes job-seeking activities and job placement.

Its “Incarcerated Parents Program” [IPP] helps the returning fathers develop and maintain positive relationships with their children during and after incarceration. One of the primary goals of the Friends Outside organization is to help break the cycle of intergenerational incarceration. 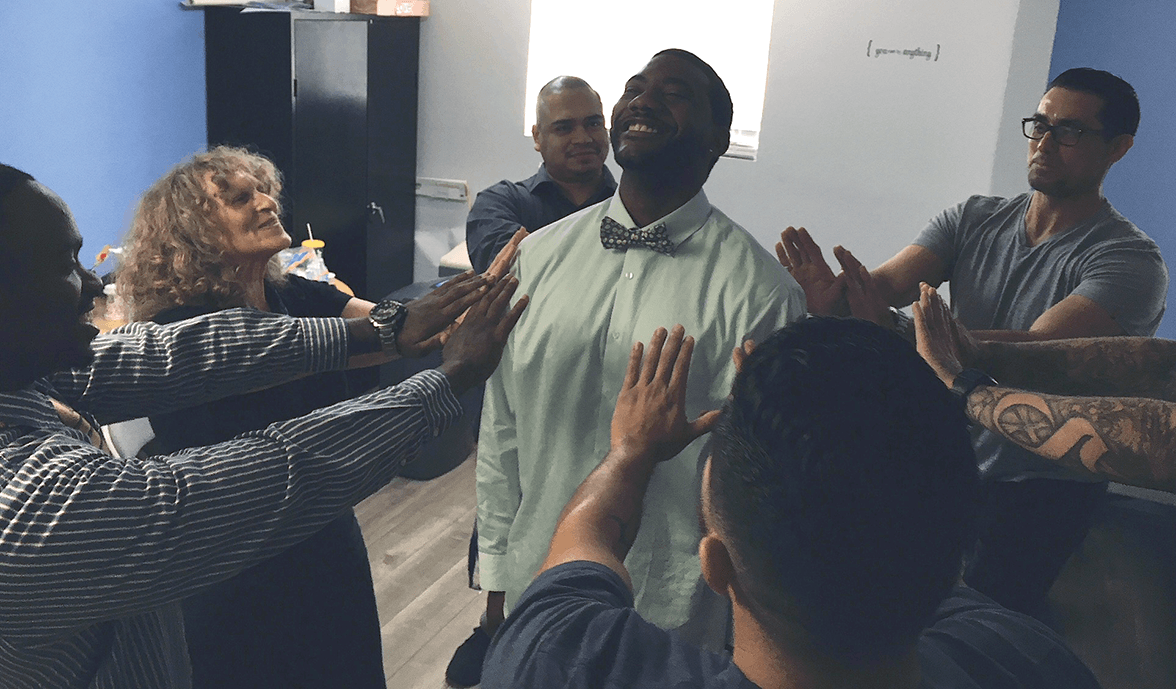 TheatreWorkers Project Director Susie Tanner with Dads Back! participants during a trust exercise

“If you’re a father and you lose connection with your son or your daughter, they have a higher incidence of being at risk to repeat and become incarcerated themselves,” said Tanner. “It just becomes this vicious cycle.

“One of the things that Friends Outside focuses on is parenting skills, fatherhood and motherhood skills and also they have a very strong program organizing family visits so families can go and visit their incarcerated relatives,” added Tanner.

There are some requirements for the IPP program: The father must have a case with the Department of Children and Family Services (DCFS). The father can’t have a “stay away” or restraining order in criminal court or in the dependency court which prevents them from having contact with their children, according to the FOLA website.

Jim Macdonald and Marlene McCurtis are part of the TheatreWorkers Project team of artists that work with the returning citizens along with Tanner.

“One of the things that is most important when folks are reentering society after being incarcerated or while they’re incarcerated is to develop trust in other people and to be able to work with a variety of individuals,” said Tanner. “We just happen to be the program that is helping them to do just that.”