Dozens of local residents gathered at Richmond’s Civic Center Plaza to watch a short documentary produced by incarcerated men to promote nonviolence among youngsters.
The Richmond Project, an inmate organization inside San Quentin, made the 10-minute video. Members of the group, from various parts of Richmond, are trying to inform the public about their views.
“The Richmond Project is for change, help the Richmond community, the youngsters to stop violence and do something positive,” said Darrel “Waylo” Williams from south Richmond in the video.
The video opened with a panoramic view of San Quentin prison and proceeded to interview a group of Richmond natives who expressed their hope for change and willingness to engage. It showcased the ordinary lives inside San Quentin and ended with an original rap song advocating peace and change.
“We were all on the same path; we made mistakes in our lives; we want to give back so others won’t fall into the same situation and predicament,” inmate Nythell Collins said.

The city of Richmond is plagued by violence, including youth gang violence. At the time of this printing there had been 14 homicides, with the latest one occurring on Labor Day, according to Richmond Mayor Gayle MacLaughlin.

“We can’t take back the negative impact that we had on our community, but we can have a positive impact from this point forward”

“That’s why this project is so important because young people would listen to those who come from the same culture,” MacLaughlin said, adding that the San Quentin men reached out to her to build a connection between inside and outside.
The video sparked heated discussion among viewers in the Whittlesey Room, which is located next to the main library in the plaza. Some offered comments, and others suggested new ways to get the video to young people.
“This is an exceptional video,” said Rodney Alamo Brown, a 47 years old writer in the audience. “It’s delightful to see them in good spirits again and willing to give back,” he added. 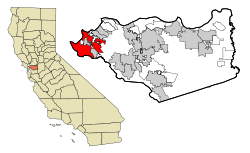 “The opportunity to reflect on our own stories and use them to shape other people’s stories is essential to recovery and transformation. We need more of these projects,” said Rebecca Brown after seeing the video.
Editor’s note: This article appeared in the Richmond Confidential, an on-line community newspaper published by journalism students at the University of California at Berkeley. After some of the members of the Richmond Project read the article, they made the following comments:
“I’m in the Richmond Project to help find solutions to the re-occurring problems before it’s too late,” said Walter Cook.
“Collectivism is a powerful tool when used to raise the social consciousness of humanity via awareness, emotional stability, and intellectual responsibility,” said Richmond Project chairman, Vaughn Miles.
“We can’t take back the negative impact that we had on our community, but we can have a positive impact from this point forward,” said Head of Education of Richmond Project, Royce Rose.
“The men of the Richmond Project have helped me understand that violence is universal and that the tools that are used to curb violence in Richmond can be used anywhere,” said Sha Wallace-Stepter.
“We want to help bridge the gap of misunderstanding between the children and parents,” said Jason Green.
“I joined the Richmond Project because it give me the opportunity to help my community, my family, myself, and the men here at San Quentin,” Ishmael Rashid Wesley said.
The Office of Neighborhood Safety [https://www.ci.richmond.ca.us/271/Office-of-Neighborhood-Safety] techniques involve street outreach and transformative travel. ONS seeks out young men who are active firearm offenders to present credible alternatives to violence.