As a chilling wind blew across the prison yard on Feb. 23, members of a running club prepared for a 12-lap race around San Quentin’s lower yard.

Some runners stretched and ran laps to warm up, then signed in one by one. At 8:58 a.m., as everyone lined up to start the 9 a.m. race, they seemed to forget about the Bay Area winter weather, everyone except timekeeper, Melody Anne Schultz.

“Running makes me feel great. I feel high, and it keeps me healthy” 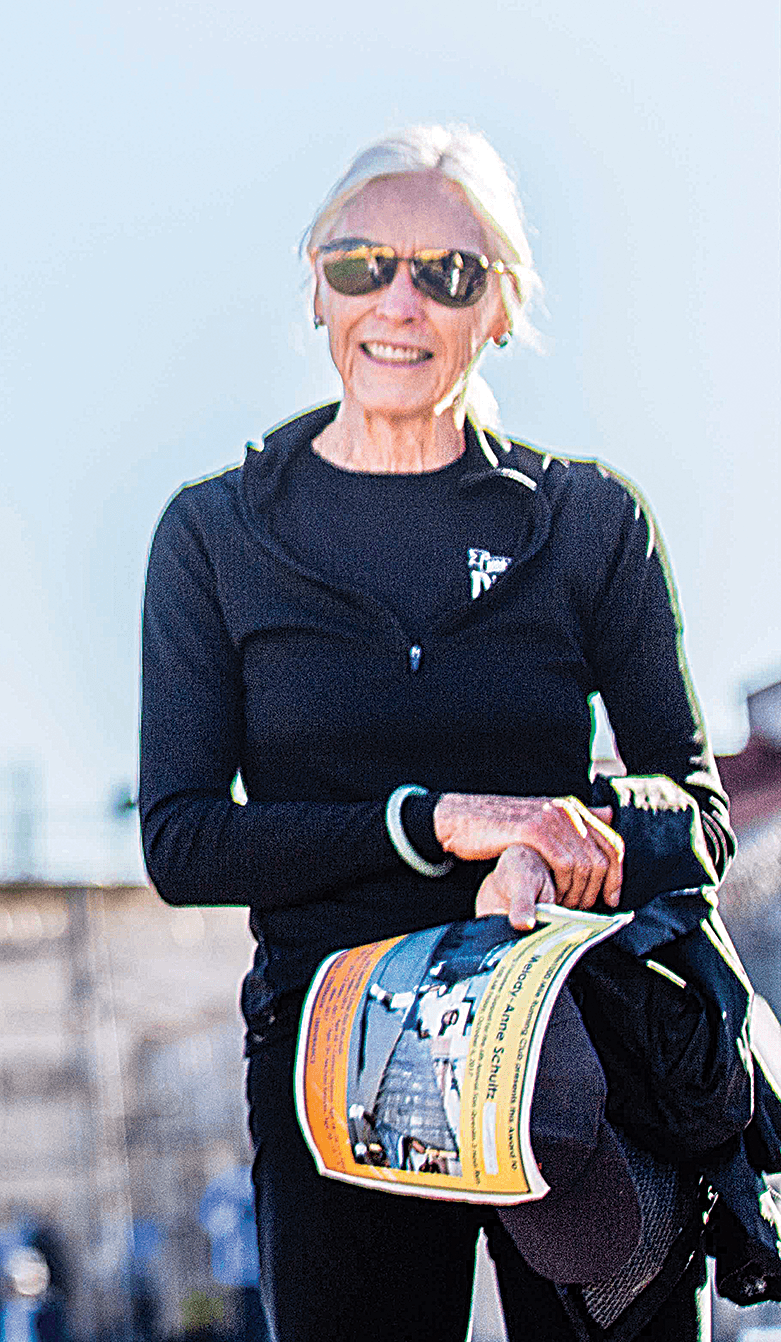 but said she was happy to be at San Quentin.

Schultz has a long history with long-distance running. About a year ago, she ran the Dipsea race over Mount Tamalpais in Marin County, which included hiking up 678 steps and traversing 200 meters along a narrow trail made of dirt and gravel rock. But Schultz was trampled during the Dipsea race – she ended up coming in last. She said that’s what caused her to stop doing trail runs for a while, even though she loves them.

“I never thought I would ever be in last, but I do eight-minute miles, and that’s good for my age group,” said Schultz with a smile.

The South African native set a world record in London at 62 years old for running a marathon in three hours and 15 seconds. Her record still stands.

Currently she is a member of two running clubs, “The Tamalpa Runners Club based in Marin and a Switzerland-based club called, La Foulle Glandwoise, which is French for “big swift strides.”

After setting the world marathon record in London, eight years later, she took first place in 2014 in a Nyon, Switzerland, half-marathon, with a time of one hour and 50 minutes — winning again in 2015, in Lausanne, Switzerland.

“Running makes me feel great. I feel high, and it keeps me healthy,” Schultz said.

Schultz isn’t the only coach with a colorful running history: Dylan Bowman recently won a 100-mile race in Zurich, and also helped fill out time sheets to keep track of the runners’ lap times during the race.

Schultz encouraged and meticulously recorded lap times for Bruce Wells, Malcolm Jones and Edward Scott. They all did well with respective times of 22:59, 26:49 and 26:33 minutes.

“I run for rehabilitation and therapy because when you think about it, you work out to release stress,” Taylor said. “So this is therapy for me and helps me focus on rehabilitation.”

Jonathan Chiu ran the three miles in 20:14, five minutes and 38 seconds faster than his best time, taking fourth place, while John Levin finished at 21:01, improving his best time by six minutes and 21 seconds.