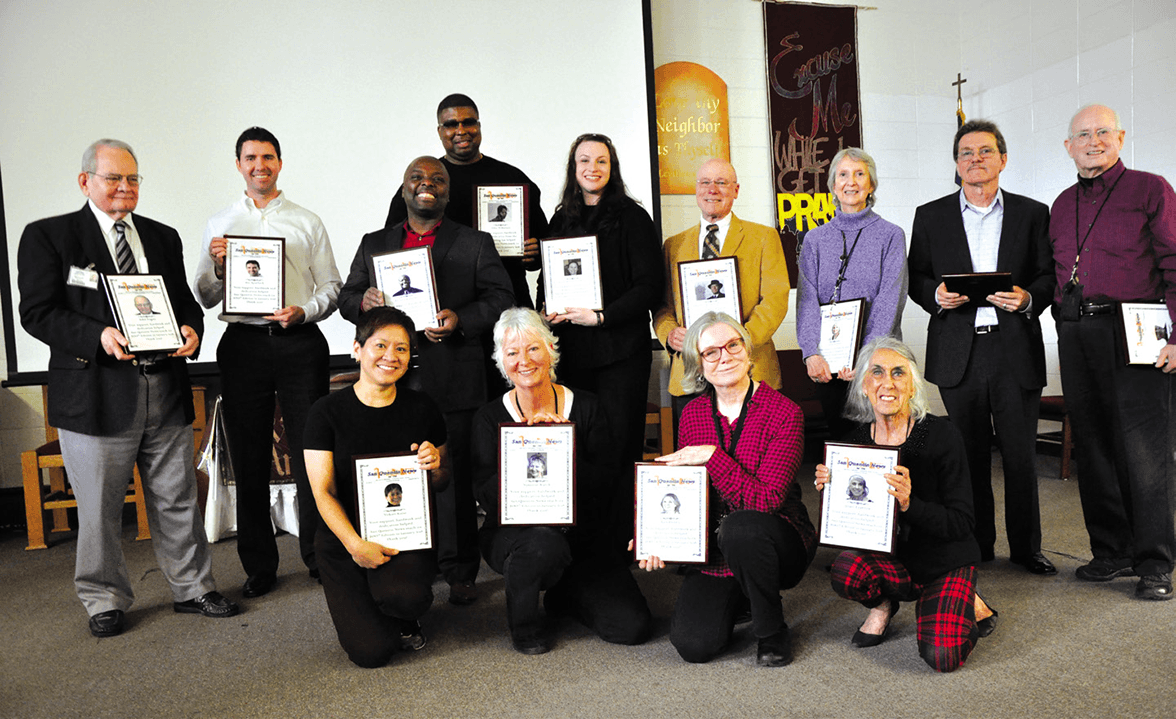 Supporters, volunteers and advisors honored for their contributions to and for the SQ News

When the San Quentin News was revived nearly 10 years ago, a staff of five put together a four-page issue and distributed it to 5,000 inmates inside the prison.

Today, the newspaper has a circulation of 30,000, distributed across 36 prisons across the state as well as to individual inmates in 43 states. In addition to news stories and features, the paper includes a crossword puzzle, cartoon, book reviews and columns. 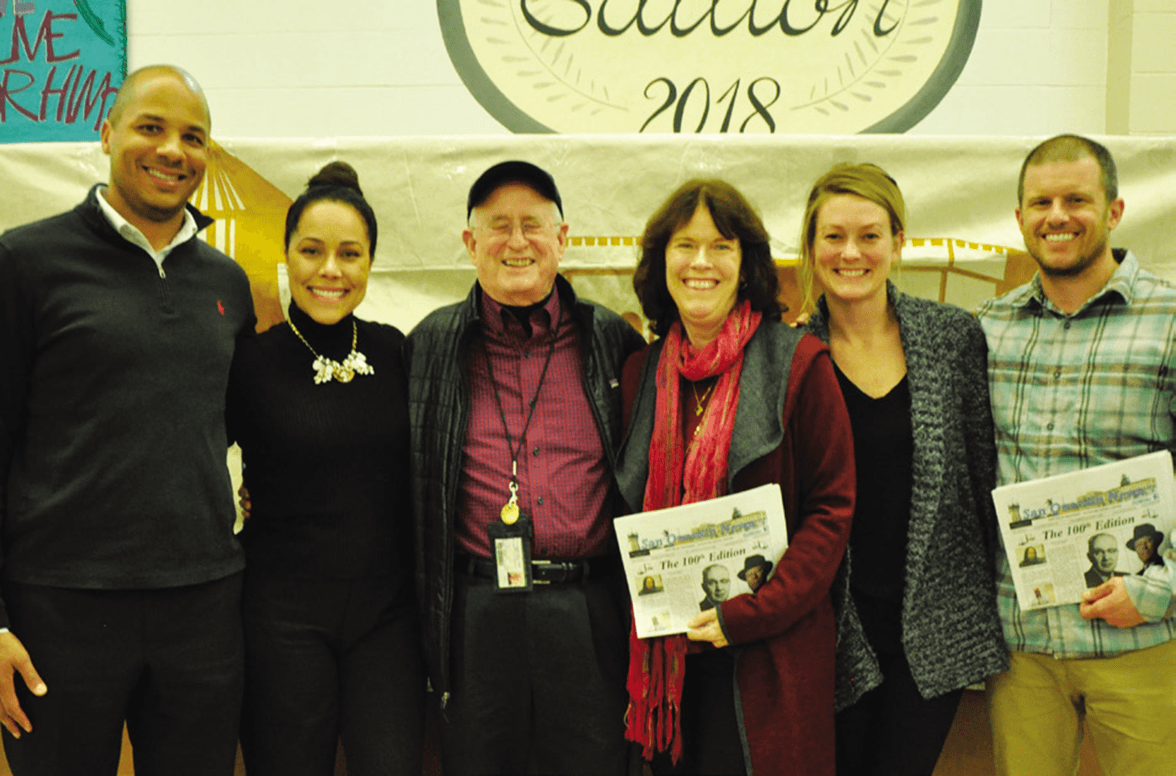 San Quentin News staff, volunteers and supporters in and outside of the prison celebrated the publication of its 100th issue in a sun-drenched hall at the Protestant Chapel in late January.

The pews were removed for the evening and replaced with small tables, decorated with shiny, gold and blue centerpieces. Outside guests and friends of San Quentin News mingled with blue uniform-clad inmates and prison officials. More than 200 guests attended the event.

Editor-in-Chief Richard “Bonaru” Richardson opened the event by honoring Warden Ron Davis with a plaque for his support of the newspaper. 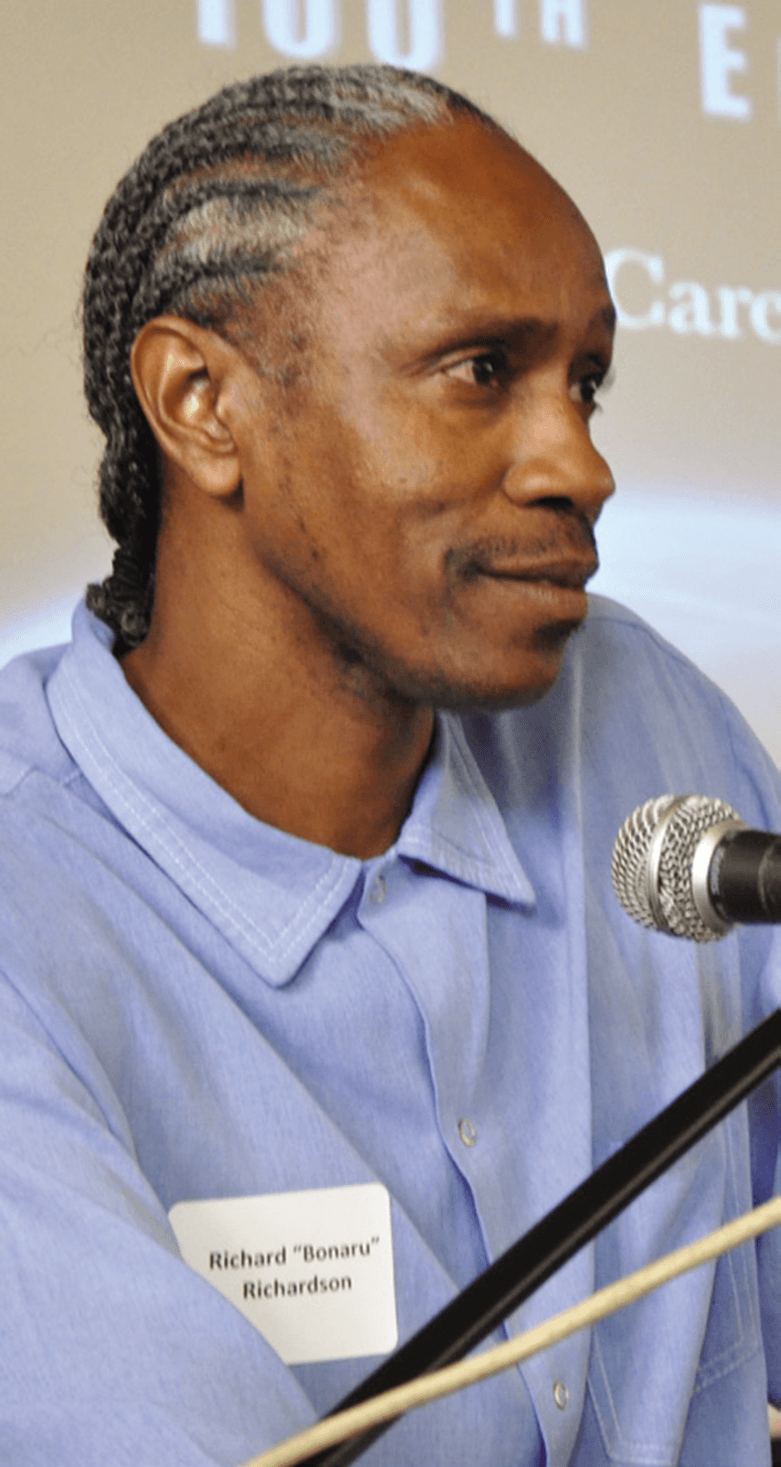 The warden shared a story of how he had visited the newsroom during his first week on the job three years ago, and the staff had spoken to him about wanting their newspaper to be distributed in every prison in California.

A short while later after attending a wardens’ meeting, he convinced the other wardens to allow the paper inside their prisons.

Richardson told a story of a childhood bereft of love and a criminal history that began when he was just 10 years old.

“Today, as I stand before you as editor-in-chief of a newspaper that so many people are invested in, I am humbled,” he said. “I am humbled because every story, every achievement, every milestone, every accomplishment, every step the San Quentin News makes is because of you.” 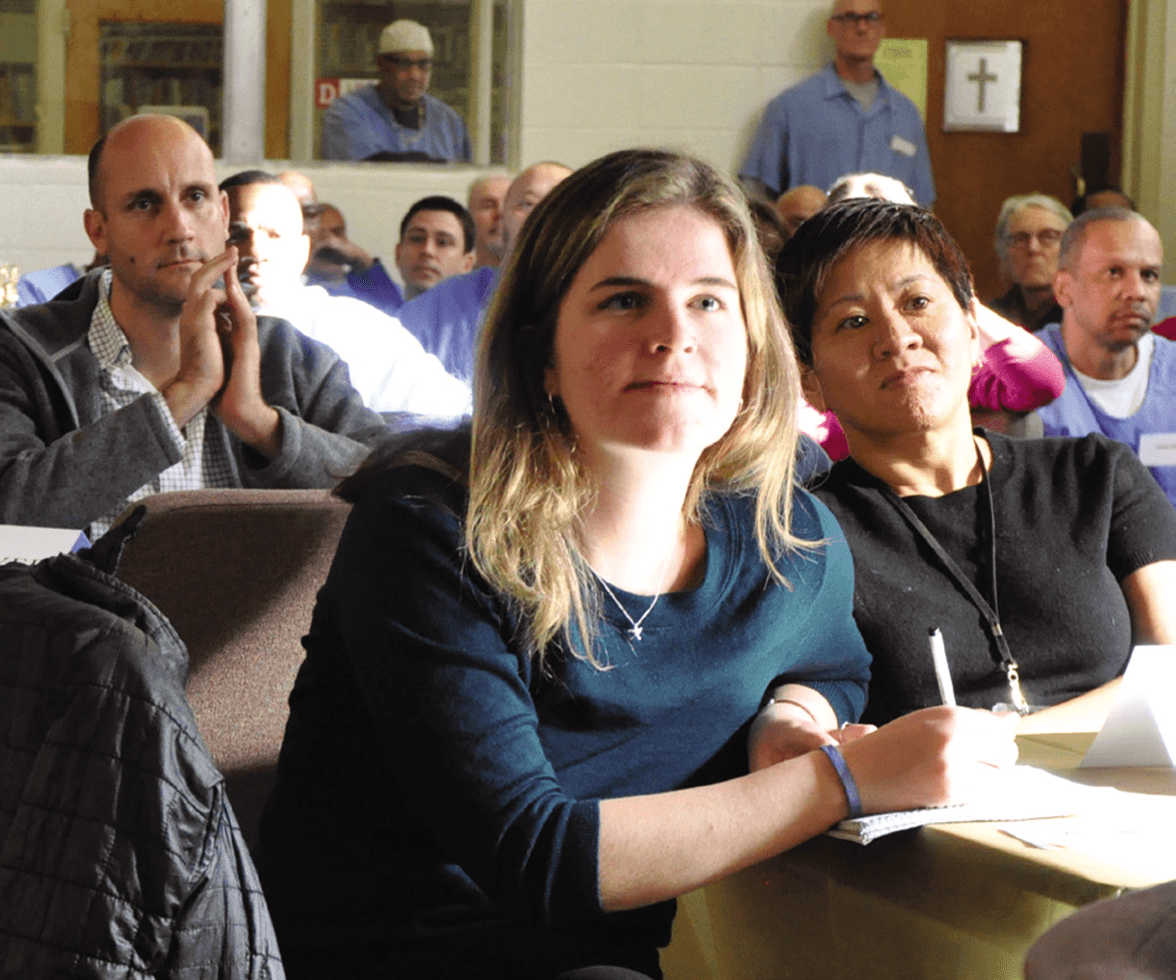 Television staff member Eric Phillips also spoke about what his involvement with the newspaper has meant to him. “We never thought that we could be here,” he said. “It shows that we can go anywhere.”

According to a presentation by Associate Editor Kevin D. Sawyer, the paper first began in the 1920s as a newsletter under the name Wall City News. It got shut down once in the mid-1930s and then again in the mid-1980s when the U.S. Supreme Court ruled that prisoner-run newspapers could not be censored by prison administrations.

In April 2008, then-warden Robert Ayers Jr. decided to take a chance and revive the newspaper because he saw the benefit of inmates sharing information.  In the last decade alone, the paper has survived numerous challenges including the print shop shutting down, limited funding, a 45-day suspension, and tight deadlines to work around lockdowns. 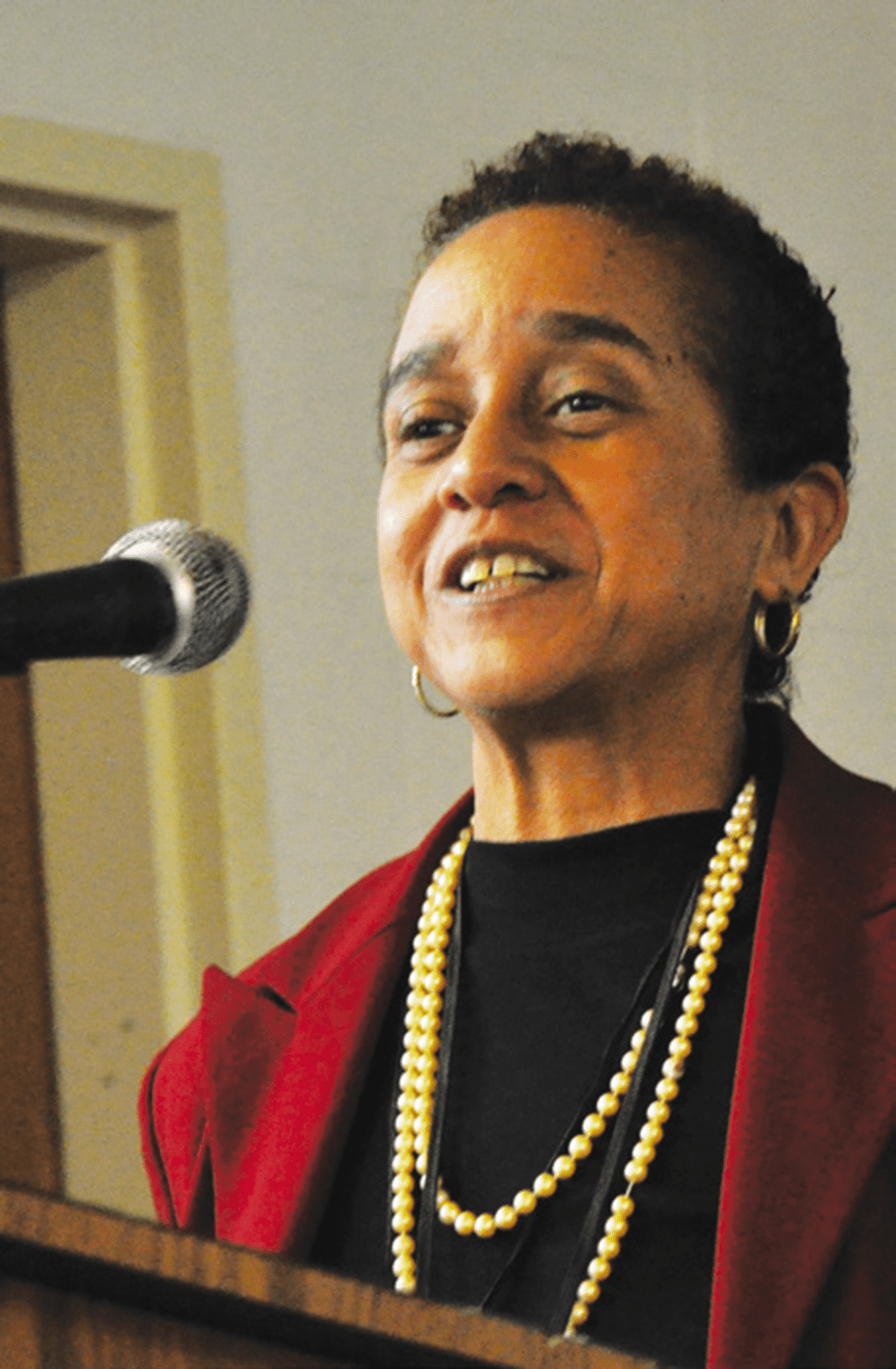 Sawyer also spoke about the advisers, donors, volunteers and fellow prison media, who helped the staff reach the milestone. In 2014, the San Quentin News won the James Madison Freedom of Information Award from the Society of Professional Journalists, which the staff belong to. “We’ve become, in effect, a professional journalism organization,” Sawyer said.

Some of the men, who have worked for the newspaper, have gone onto be criminal justice advocates after their release. The crowd applauded when Sawyer spoke about the zero percent recidivism rate of former staffers.

The joy in the room, however, was also accompanied by an undertone of grief as the community mourned the absence of former editor-in-chief Arnulfo T. Garcia, who died in a car accident last September. Garcia’s family represented him at the ceremony.

“He would want us to move forward and I will move forward with him with me,” Richardson said after a tribute video was shown in his memory. 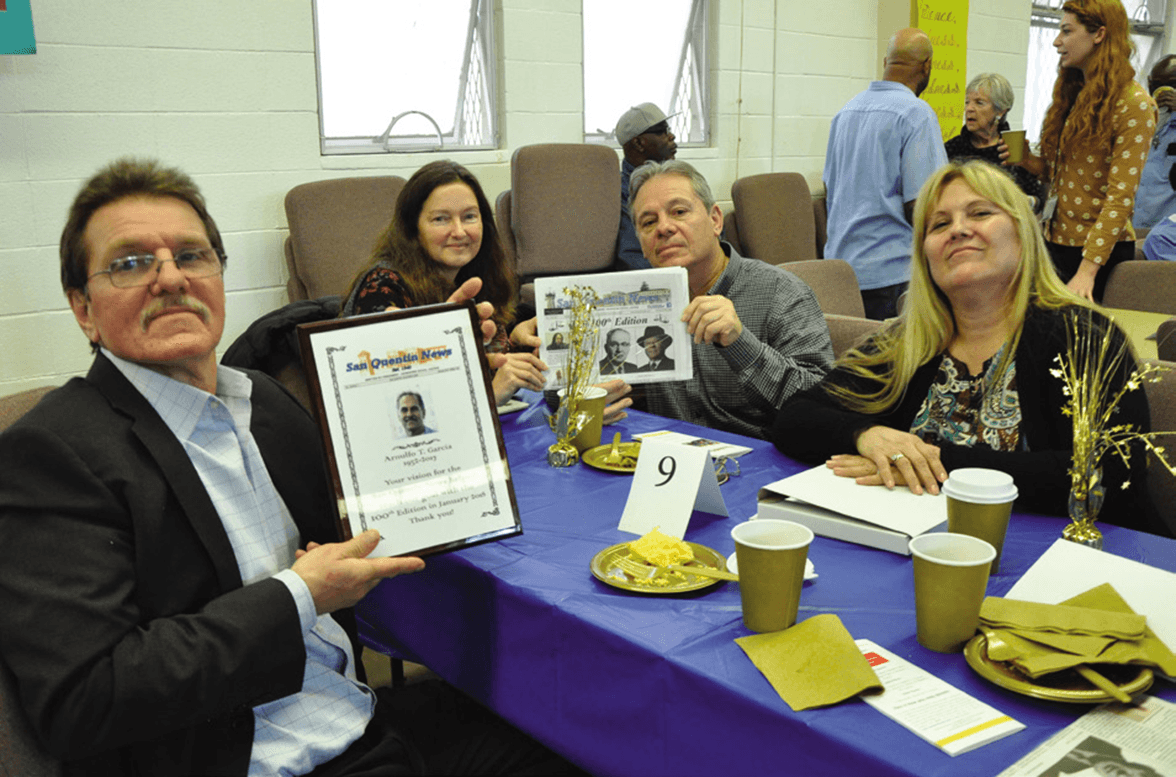 During the ceremony, former warden Ayers challenged the staff to be a news agency of integrity that challenges the status quo and changes the prison mentality in addition to the public’s perception of criminal justice. “A medium like the San Quentin News can be a conduit for change,” he said.

Managing Editor Jesse Vasquez shared plans for upcoming projects such as a forum with law enforcement, a newsletter for the juvenile justice system, and a program to bring awareness to prison culture.

Also in attendance was Richard Alden Feldon, the director of programs and a board member for the Jonathan Logan Family Foundation.“We empower world-changing work, and we think San Quentin News is a world-changing newspaper,” said Feldon.

With a $250,000 grant given by the Reva and David Logan Foundation to the San Quentin News over the past two years, San Quentin News was able to plan its long-term vision and expansion plans.