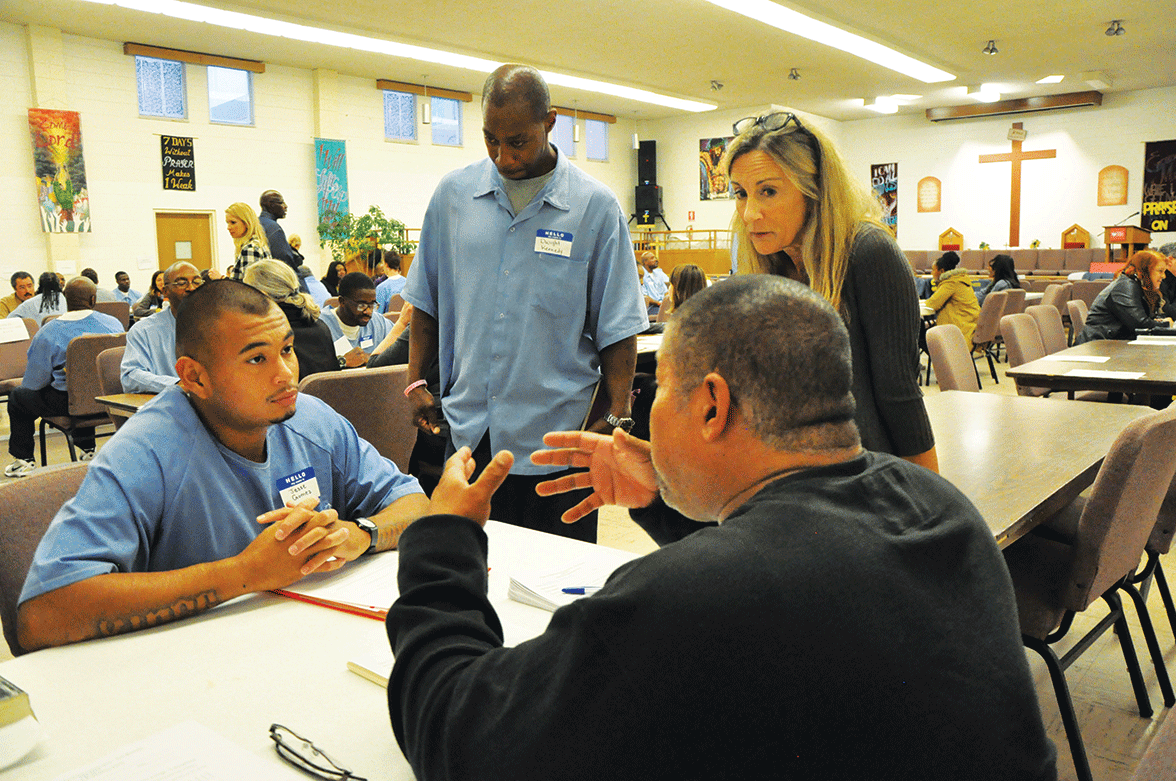 Warden Ron Davis welcomed the employers and organizations, thanking them for their time. “At the end of the year, I’ll have been warden three years,” he said. “It never ceases to amaze me the events that happen here. The stuff you guys do here doesn’t happen in other places.”

Diana Williams, executive director of PEC, said, “Forty-seven (inmates) signed up, 36 made it through. They spent the last 11 weeks reading for this program. They created a packet of success. They learned about financial literacy. They’re ready to go.”

This graduating class had a few unusual guest learners from the prison’s Youth Offender Program (YOP). Williams discussed how important it was for the YOPs to attend, “so they’re not sitting here in 20 years,” she said, acknowledging DeShante Jones, David Rodriquez, Darnell Stewart and Jesse Gomez.

“This is my first time going through anything like this,” said Jones, a YOP inmate. “I got the chance to experience things at San Quentin that I never had.”

The guests and older inmates in attendance applauded the YOPs. “Jesse (Gomez), you’re the only YOP who met the criteria, showed up, did the work and completed,” Williams said.

“This program was phenomenal,” Gomez, 20, said to the audience. “I experienced something in here I never experienced anywhere else.” This is his first time in prison. He’s been incarcerated two years and will parole in a year. He’s also enrolled in a GED class.

More than 100 inmates have graduated from the program since its inception two and a half years ago, and the number of inmate participants and outside guests is steadily growing.

More than 30 employers and representatives from various support organizations came in to take part in assisting inmates with reentry.

“All I need is a strong work ethic and positive attitude, and I can teach you the rest,” said Jack Bronkie of Cala Restaurant.

“I love it,” said Lonnie Tuck, from the Center for Employment Opportunity. “I met a few gentlemen who’ve graduated and it’s good to see they’re doing well. Those who take advantage of programs like this are ready, so it makes my job easy. I wish more facilities had programs like this.”

Ellery Graves of Lao Family Community Development, Inc., said her organization provides case management, job coaching, and training. She heard about PEC through an email and said she’s grateful to be here and meet people ready for the next step. “I work with a lot of employers,” Graves said. “I try to be a match-maker, the in between. There are a lot of employers ready to hire.”

Williams said recidivism at one time was more than 50 percent but has lowered in recent years, usually due to employment. “We create partnerships,” she said. “I believe these connections make all the difference.”

“If they’re going out they need to get jobs,” said Associate Warden Samara. “That’s a good idea.”

“I’m a three-striker and I’ve paroled twice before, to a park bench,” said James Norton, 49. “Now I have an opportunity to parole to a house, which is cool. I go to the Board (of Parole Hearings) in three weeks. Even if I don’t get a (parole) date, I’ll help facilitate the next class.”

Bre Davis used to work with the California Re-entry Program and has been an on-and-off volunteer with PEC for two years. “This is the type of thinking they have to start developing to succeed,” she said about the young men in YOP.

“I support Diana (Williams) with anything she needs,” Davis said. These things include helping the men with résumés, work exercises, interviews and class assignments. Davis also works with men and women undergoing reentry and others who are on probation in Alameda County. She has a background in sociology. “I’m honored to be a part of this program,” she said. “I do it because I want to, not because I have to. I’m also learning as I go along.”

Patty Oxman is another volunteer who supports Williams. “It’s important that the program is growing,” she said. “I’m happy to be her (Williams’) grunt so she can do the important work.”

Lani Wilkins, of District Council 16 Apprenticeship Programs of Northern California, said he attended PEC a second time for “the opportunity to give back” because “some of you guys have worked hard.” 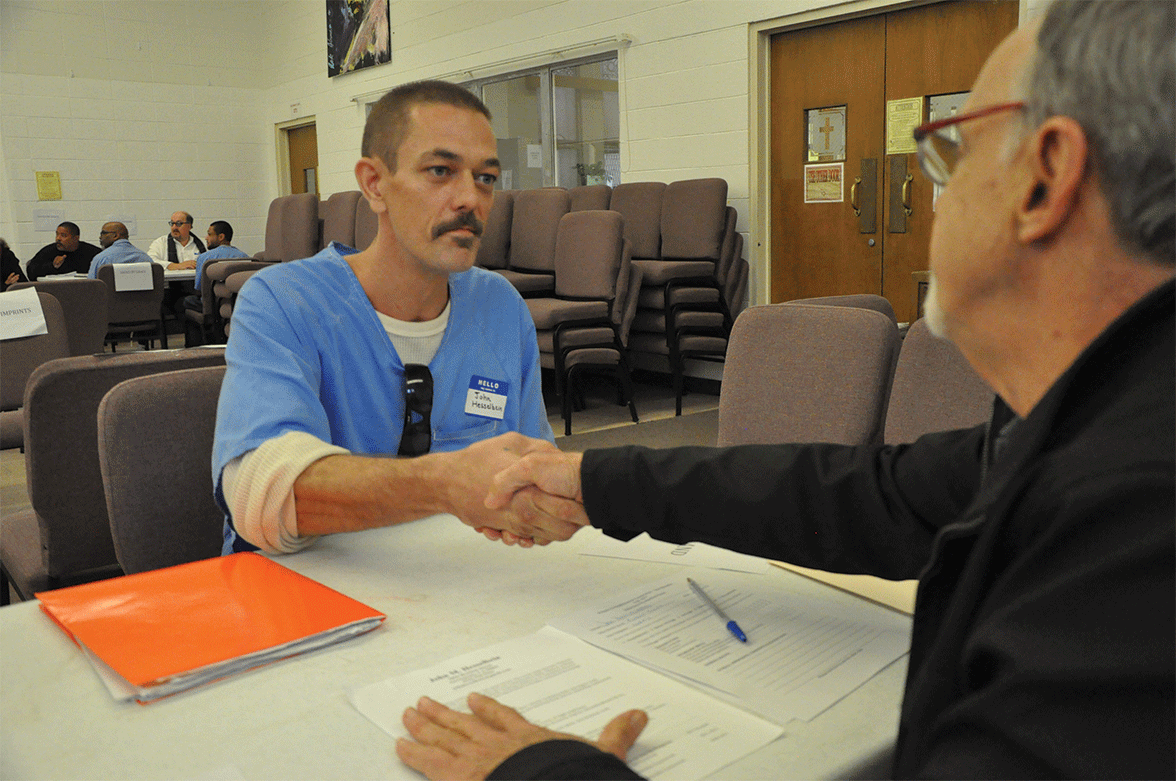 “I would like everyone to know how rewarding it is,” said Lorna Schea, of San Francisco City College’s Culinary Hospitality Department. “Not just for the inmates but for us.” She attended PEC to promote their three programs: basic skills, one-year certificate in food technology and dining services, and a two-year degree program.

“I was contacted by an inmate who read about (PEC) in San Quentin News,” said Jennifer Rudd, also with SFCC’s culinary program.

It was the fourth appearance at PEC for Johnny Cochran, of Goodwill Industries. He said they hire people coming out of the criminal justice system. “I came because a friend of mine told me about the program and I wanted to be a part of it.”

“I like to give thanks to the brothers,” said inmate John Windham. “You stuck it out and you made it. This is what it’s all about: making connections.”

Williams has been volunteering at San Quentin for three years. She holds an M.A. in counseling psychology and is a Certified Professional Co-active Coach.