More youth offenders are getting parole these days, thanks to changes in the criminal justice system. But left out of the movement are young people serving life without parole terms. 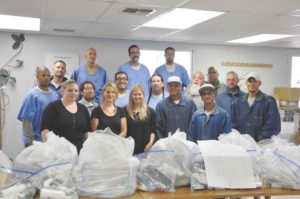 “At 18 years old, I committed a crime and was sentenced to life without possibility of parole,” said Sunny Nguyen, an inmate at Soledad State Prison in California. “I’m now going on 23 years. If they gave me 1,000 years-to-life, I would have gotten a second chance after serving 25 years (under SB 261), but because I was sentenced to life without parole, I get nothing.”

SB 261, enacted in 2015, allowed individuals serving lengthy prison terms who committed their crimes under the age of 23 to qualify for parole consideration at the latest after serving 25 years of their original sentence.

Youth offenders who are serving life without the possibility of parole (LWOP) are in a distinct category, because society deems these young people to be irredeemable.

For those excluded from juvenile justice reform, life is especially hard, for they cannot partake in the changes made in the last five years.

In 2012, the U.S. Supreme Court ruled in Miller v. Alabama that mandatory sentences of juveniles to LWOP is unconstitutional.

In 2013, California lawmakers passed SB 9, allowing juveniles serving LWOP to petition a court for a new sentencing hearing, to replace LWOP with a 25-years-to-life sentence.

In 2014, California lawmakers passed SB 260, which established rules for the parole board to take into consideration the “youthfulness” of an offender as a mitigating factor when considering parole.

In 2017, the Legislature enacted AB 1308, a bill that would raise the age from 23 to 25 for those to be considered youth offenders. It was sent to the governor for final action.

All the above reforms were based upon the current understanding of human brain development.

“Science and common sense support the appropriateness of youth offender parole hearings for young adults up to age 25,” said Stone.

Major studies conducted by universities confirm that the prefrontal cortex doesn’t have nearly the functional capacity at age 18 as it does at 25.

Individuals who qualify for youthful parole consideration must prove their rehabilitative changes and demonstrate they are no longer a threat to society at a parole board hearing staffed by former wardens, district attorneys, survivors of crime and former correctional officers.

Despite no foreseeable changes for youth offenders excluded from SB 9, SB 261 or AB 1308, some are hopeful.

“I’m optimistic for changes down the line for us, but in the meantime, I’m going to do what I got to do by getting an education, like working towards an associate’s degree,” said H. Thu Ly, an inmate at Solano State Prison who was sentenced to LWOP at age 19.

“I came a long way, gained a lot of knowledge over the years, and it’s just part of growing up. I just wanted to do something with my life, and give it some meaning,” Ly said.

Future legislative change may depend on greater acceptance of scientific understanding of environmental impacts on human development, as related by Betrand Thompson, an inmate at Ironwood State Prison in California.

“Tupac Shakur once referred to our upbringing as roses that grew from concrete and as a result our petals have been damaged,” Thompson said.

“Think about a child, a teenager, whose brain is not fully developed, coupled with experiencing drugs, or having addicted parents, facing verbal and physical abuse, and living in gang-infested neighborhoods.

“What do you think this child’s disposition would look like?

“I come from this reality. I once conducted a lot of careless acts of criminal behavior in my youth and as a result I have been locked up now going on 17 years. I do not render these truths to minimize, justify, or excuse the wrong that I have inflicted upon others and upon myself.

“I render these truths to place some intelligence on our crisis, because this is a crisis that demands our immediate attention.”

The United States currently has approximately 2,500 juveniles serving life without the possibility of parole, according to The Sentencing Project. Thousands more serving LWOP are incarcerated between the ages of 18-25.

“We ask that you judge us by our will to regain the trust of our communities, help bridge the social gap between us and society, for making the necessary changes in our lives to be part of the solution and no longer the problem,” Thompson said.

29 years in prison is enough for Mike Webb