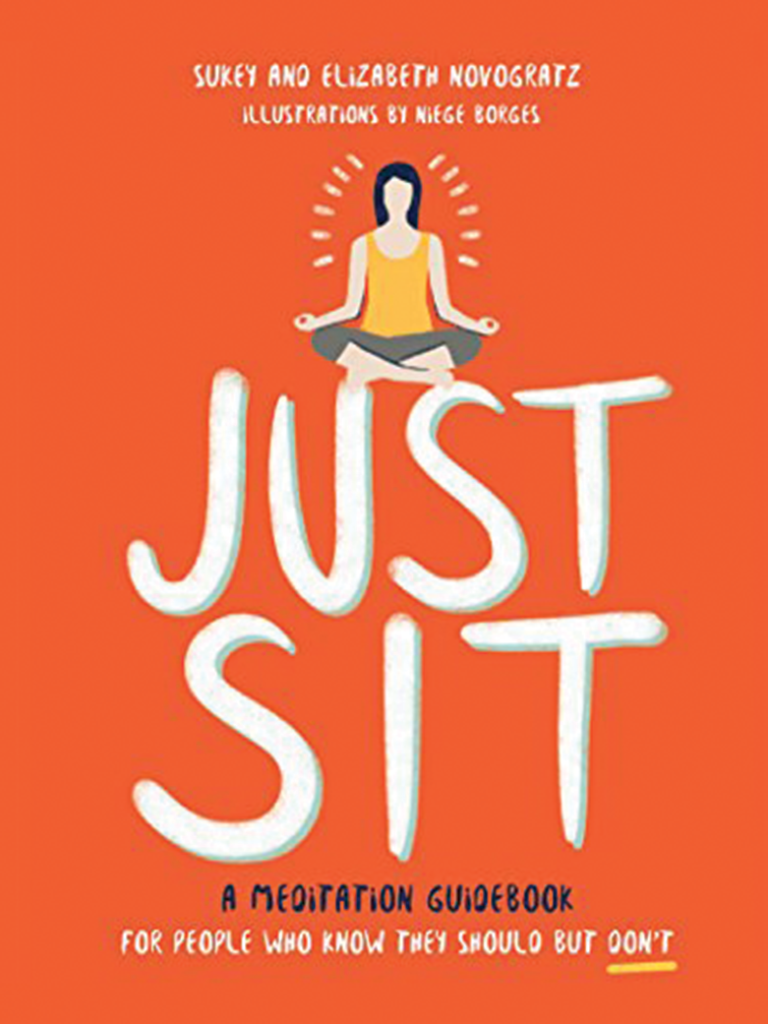 Authors Sukey and Elizabeth (Beth) Novogratz didn’t write their book on meditation exclusively for prisoners, but much of their approach seems tailor-made to deal with the issues we at San Quentin confront in our everyday lives. On August 1, they traveled from New York to the Q on a quest to discover how their approach to meditation could intersect with our programs.

Just Sit: A Meditation Guidebook for People who Know They Should But Don’t emphasizes the importance of story and the writers alert readers to pay attention to the stories they tell themselves about who they are.
“… we talk about story because a lot of negative things in our lives end up going back to story,” Beth said. “We need to give our- selves permission to take a break and realize that it’s not the fact. Those stories don’t have to define who we are.”
According to coauthor Sukey, stories are really just habits of thinking. When we sit in meditation, we filter out the daily stuff so we can see the space between behavior and choice.
A story, whether true or not, is still a story. It doesn’t mean anything un- less you assign meaning to it. We forget that all the time. Meditation pulls you outside of the story so that you can see it.
“When you realize it’s just a story, you realize that you don’t have to live like that,” Beth said.
For too many of us, “living like that” results in depression, the exercises they present are designed to combat depression. (see sidebar)
When they toured San Quentin, the authors, who are sisters-in-law, visited several programs they believed would either benefit from meditation or would be complementary to it.
— First stop: the prison’s computer coding program, Code.7370.
— They subsequently met with Karena Montag, facilitator of Insight Prison Project (IPP).
IPP conducts self-help programs in 26 jails and prison, nationwide. Included in the meeting was inmate, Phoeun You, who helps facilitate Victim’s Offender Education Group (VOEG, pronounced vogue).
The four discussed advantages that meditation has for group therapy set- tings as well as how trauma therapy could improve by listening to incarcerated participants’ take on what works.
Montage explained that she seeks expanded access to IPP programs to more incarcerated people, but needs more trained professionals.
— Next on the tour was James Fox who has taught yoga in San Quentin for 16 years. He described the Prison Yoga Project, a worldwide effort aimed at expanding the practice of yoga to include incarcerated people. Fox and the book’s authors discussed the relationship between yoga and meditation.
In the current edition, there are tips for finding a place for a great retreat. The authors suggest asking questions such as, Is there air conditioning? Is there Wi-Fi? Can I keep my cellphone with me? What’s the bathroom situation? These are clearly not questions the average prisoner at San Quentin would be asking. This gave Sukey and Beth the incentive to develop another edition of Just Sit, geared more toward prisoners.
At the end of their visit, Sukey and Beth were excited to learn that they are invited to come back to teach meditation techniques to our guys.

thought and sent it to your chosen place Continue for 5 to 15 minutes
Feel your feeling
You sit.
You take 3 deep belly breaths.
You locate and identify the physical feeling that is operating within you.
You feel and experience that feeling in your body. You watch that feeling.
You watch what it connects to.
You watch the anxiety or depression or pain or all three.
You watch the craving.
You watch the desire to quash the feeling. Do it again. That’s it.