The dozens of employers and organizations that support rehabilitation by visiting San Quentin to interview inmates have captured the attention of the state’s top corrections official.

In May, the prison hosted its fifth Prison to Employment Connection (PEC) event in two years. This time, Scott Kernan, secretary of the California Department of Corrections and Rehabilitation (CDCR), took notice.

“It was really important to be here today,” said Kernan. “It’s a very common-sense objective to get people employed.” He said Gov. Jerry Brown is making employment “a merging priority” with rehabilitation. “Giving someone a chance to earn a living wage reduces recidivism.”

San Quentin Warden Ron Davis spoke briefly, thanking the outside guests for their support and wishing the inmates “good luck.”

During the 12-week employment connection workshop, more than 35 inmates learned how to present themselves on paper with cover letters, résumés and follow-up letters. They also learned how to conduct themselves during an interview.

Jennifer Rudd from City College of San Francisco’s culinary and hospitality program said everyone was organized. “I have been incredibly impressed with the preparation the men have put into their turnaround portfolios.”

“I think it’s a good opportunity for people to learn how to interview,” said Oscar Gonzales, 46, who had been incarcerated four years. He thought he had a potential job lined up with one employer. He paroled in June.

Steve Emrick, the prison’s community partnership manager, said some men were sent to prison at a young age and don’t understand the process of getting a job. “We’re taking guys out of prison and preparing them for employment,” he said. “This really breaks down those barriers and gives them that experience.” 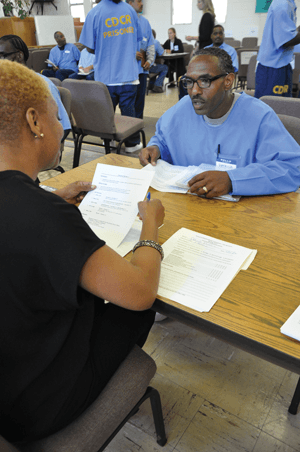 Patrick Fletcher, 53, didn’t know the ins and outs of getting a job. He was incarcerated at age 19. “I didn’t attach myself to values and principles until I matured,” Fletcher said. “By then I was in prison for about 10 years.”

While incarcerated, Fletcher earned his GED, learned carpentry, welding, janitorial work, and how to drive a forklift. Earlier this year he completed a Microsoft course, in addition to the work he’s done in self-help programs. His final step was learning what to do with this knowledge.

“It’s all coming together,” said Fletcher. “For him [Kernan] and Warden Davis to be in the room together says a lot about the governor’s plans for the prison system, and I’m glad to be a part of it.” Fletcher will appear before the Board of Parole Hearings later this year.

Diana Williams, who co-founded the PEC workshop with inmate Noble Butler under its previous name, Employment Readiness Seminar, said CDCR recidivism was at 65 percent in 2010. Today, she said it has dropped to 45 percent. Statistically though, 16 of the men at the seminar will return to prison within three years of their release.

“I’ve spent the last 12 weeks with these men. To think 16 will return, I know you can do better than that,” said Williams.

“I had trouble talking to people,” said Joe Loredo, 48. “It [PEC] gave me hope and opportunity to achieve a lifelong dream to establish myself as a hard-working citizen.” He paroled in June.

Diana Velasquez of One Stop Career Center said they provide services to help people with résumés, cover letters, interviews, clothing, and workshops. They also help individuals with their credit and housing, and allow them free use of computers.

A representative from Center for Employment Opportunity told the men, “It’s easy to get a job when you’ve got a job,” emphasizing the importance of finding employment as soon as possible.

“When I heard about it, I thought it was amazing,” said Gabrielle Nicolett, a former juvenile probation officer. She volunteers to help facilitate the program with activities such as grant writing. “It’s extremely inspiring. It’s great to see them [inmates] so excited,” she said.

Inmates said they were particularly pleased that the employers didn’t treat them like prisoners.

Williams said about 180 interviews took place. The employers filled out 152 assessments on the interviews and ranked them as follows:

9% of the interviewees scored low.

49% of the interviewees scored good.

40% of the interviewees scored excellent.

Williams provided the graduates with certificates of completion and a list of employers who hire parolees. “Use the employers on this list,” she said. “They won’t give you ‘the look.’”

Butler said originally he did this for himself because he wanted to know how to get a job. But it turned into something bigger. “I had an idea, but when I was introduced to [Williams] it really took off.”

Butler’s idea seemingly underscores the sentiment of Gov. Brown, as expressed by Kernan when he said, “We’re changing the way we incarcerate like nowhere in the nation.”