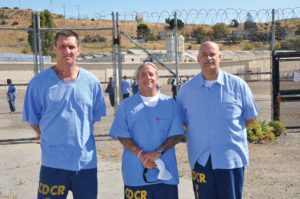 “If you want to change the path of your life, go to VOEG,” said Kevin Thompson, a recent graduate of the Victim Offender Education Group (VOEG) from H-Unit.

VOEG is one of a myriad of volunteer-organized rehabilitation programs at California’s San Quentin State Prison.  It meets once a week for two hours and usually consists of a dozen inmates, one inmate facilitator and two volunteer moderators.

VOEG’s purpose is to help inmates develop empathy for their victims, communities and even their prior selves.  A component of restorative justice, VOEG helps offenders learn to demonstrate accountability for their crimes and develop new habits to respond to life’s challenges.

The recent H-Unit VOEG group had the support and participation of the actor Danny Glover for one of its sessions.  “He spent the whole two hours encouraging us while sharing his life story,” said Richie Pinney, another VOEG graduate who has been incarcerated for 13 years.

Inmates evidence their progress by participating in a Survivor Panel among victims of violent crimes or the victims’ next-of-kin and the group.

Much work must be done to prepare for a Survivor Panel; usually this takes between 12 to 18 months.  The work consists of examining the facts of each inmate’s individual crimes and their impact on victims, families (both the victims’ and inmates’ own), community, and self.

There is a set curriculum that inmates follow, but most of the work is based on the give-and-take discussion within the group. One must “trust the process and [the group will] not move on until everyone is ready,” said Anthony “Mike” Gonzales a 55 year-old graduate.

“You are in the deep water,” said Pinney, a Stand-Up clerk, “but everyone joins you in the deep end of the pool.  You create the space to really share and have a bond that lasts.” He added, “I’ve already invited half a dozen guys to join the next group and committed to act as an inmate facilitator.”

This H-Unit VOEG Group Victim Panel was held on Aug. 16.  The sharing by both sides was poignant and heart-felt.  “I’ve been down since 1994,” said Gonzales, “the toughest question I got was ‘I know you are going to parole, are you safe now’ [to join my community?]”

The Victim Panel helps all its participants realize that they can honor the victims of crime by moving on from victim/offender to become survivors.

Thompson will parole soon and plans to take what he has learned in VOEG with him to the outside.  “I would do it again….it will make me a better person [a Narcotics Anonymous] sponsor,” he said.

Thompson paused, looked up and said, “This is my 14th time paroling.  I’ve been in and out for 26 years, starting in 1988.  I always knew I’d be back.  This is the first time I feel I have the tools to make it out there.”

Going against the machismo culture against women