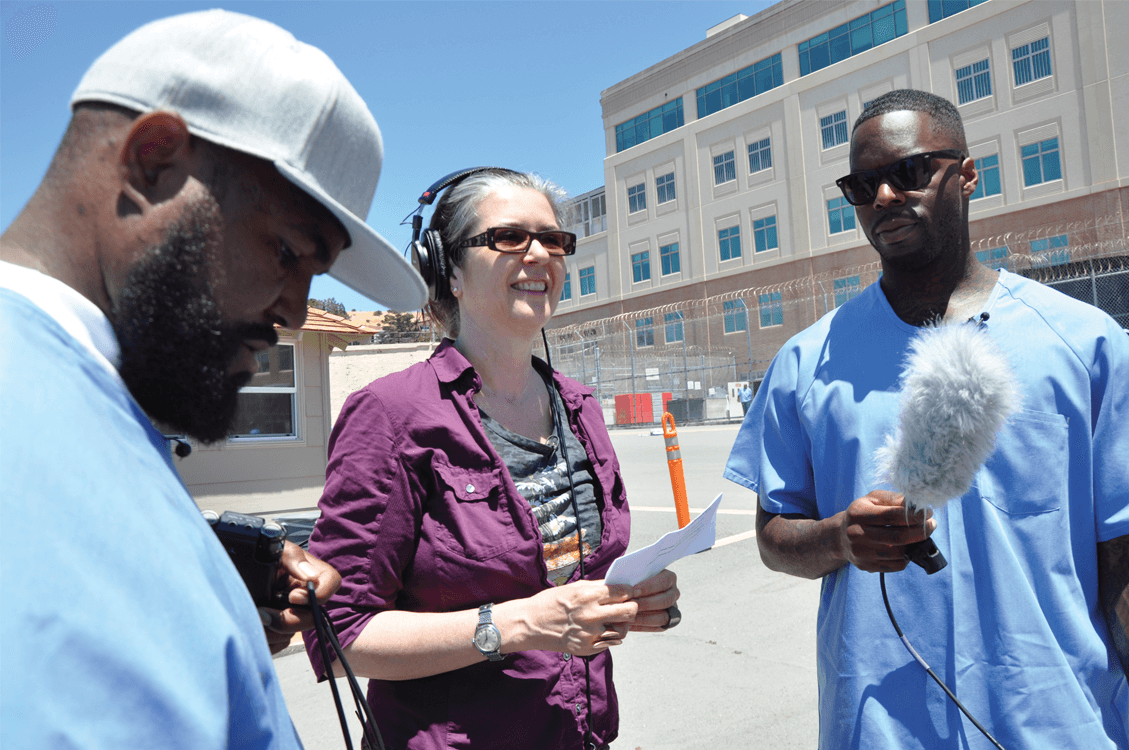 The hit podcast Ear Hustle, launched from inside a prison, started its first season with the goal of starting a dialogue about incarceration and humanizing people inside. With 6,268,176 downloads, it has achieved more than it ever dreamed.

“I thought people would be interested, but I didn’t think it would be so big,” said co-host Professor Nigel Poor. “I see the emails, Twitter, Instagram and I still don’t understand what it means. People tell me it’s huge; it’s changing people’s minds.”

Ear Hustle features stories told by incarcerated people, often revealing the universal nature of life, no matter where you live. The show is co-hosted by Earlonne Woods. Antwan “Banks” Williams acts as the sound designer, both serving prison time at San Quentin.

“I’m proud of the listeners for not having a judgmental ear,” Williams said. “We had people in politics, wardens of other institutions, and people at schools commend us. I’m proud because being incarcerated, people normally throw a wall up.”

Dozens of media outlets covered the rise of Ear Hustle without an indictment of its subjects or creators including The New Yorker, The Atlantic, Vogue, NBC’s The Today Show, NBC News, USA Today, The New York Times, and Rolling Stone.

After winning a podcast contest hosted by Radiotopia, Ear Hustle had to produce 10 episodes from behind the walls of San Quentin State Prison.

“I’m proud that Lt. Sam Robinson (Public Information Officer) allowed it to happen,” Woods said. “I’m also proud of the fact that Julie Shapiro (Radiotopia executive producer) and the Radiotopia staff had the vision to choose us.”

Poor said, “I am really most proud of how it is bringing people together. Proud of the hard work, hitting problems and not giving up and keeping in mind that the product is bigger than us, and we have a responsibility to put out really good stories.

“I have a lot of gratitude to the San Quentin community from the administration to the guys in stories and the guys who listen. I think it’s really great. I’m pretty sure this couldn’t happen at any other prison.”

“I’m still in here,” Williams said. “We haven’t seen the response on the internet; we haven’t heard the chatter.”

Woods added, “Most of what we see (social media responses) is what Nigel brings in. When tours come through and there’s a variety of different people and they have heard of Ear Hustle, I think that’s when you get a window to what it’s really like—that people really received it.”

Nigel spoke of a listening event in Toronto she attended on behalf of Ear Hustle. Woods and Williams couldn’t be there, so they showed video clips of the two before a packed audience, who clapped for about 30 seconds.

“What an amazing experience being in a theater packed with people listening to Ear Hustle. Who would have thought that would have come out of a prison?” Nigel said.

Ironically, their biggest challenge was not having enough of something prisons usually provide plenty of—time. 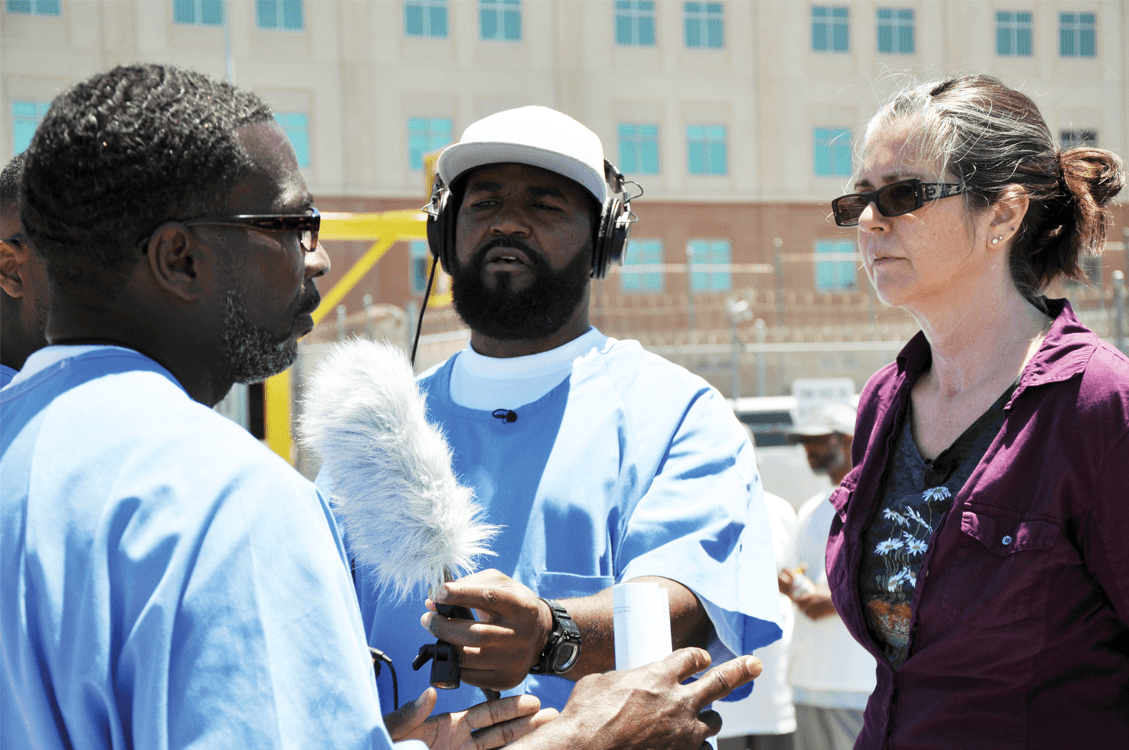 Woods, who normally runs laps a few times a week, said he gained 20 pounds because there was no time for anything but Ear Hustle.

He added that the story is never completed until Poor takes the approved story outside of the prison and beyond his second thoughts.

For Williams, their biggest challenge was, “trusting each other because we all have different views at times, trusting that our vision is the same. We’re all trying to get to the same place, not letting our egos and desires get in the way of something so successful.”

Ear Hustle turned Poor’s volunteer work at San Quentin into a full-time job. In addition to co-hosting and editing inside, Poor runs the social media pages on the outside. She has taken a one-year sabbatical from teaching photography at California State University, Sacramento.

“My biggest challenge is trying to find balance in my life because everything I do is Ear Hustle,” Poor said. “The only time I’m not working on Ear Hustle is when I’m sleeping or at the gym. Thank God I have an understanding husband.”

So far, Poor doesn’t miss teaching. “I don’t have time to miss anything except my husband,” Poor said.

Looking back over the season, each has their favorite episode except Poor, who loves all of them.

Two episodes stand out to Woods: “Misguided Loyalty” and “Left Behind.”

“Those are my favorites based on what they both represented,” Woods said. “Misguided Loyalty hopefully will steer youngsters away from gangs. Left Behind shined the light on a lot of guys caught up by the three-strikes law. It’s Curtis’ (the main character) plea bargains and tribulations of being locked up.”

Williams said, “Boom Boom Room” (about family visiting) probably is my favorite because I’m really close to Mav, and I know his wife and son personally. To give people an opportunity to know him like I know him … ‘rawfully’ honest and vulnerable about his situation, is always a good thing.”

Ear Hustle earned eight-episodes for the fall and spring seasons for next year.

Woods and Poor expect the next seasons to be better based on the experience gained working together as professional colleagues.

“We had 10 episodes to understand the process,” Woods said. “So our next eight episodes will be way, way profound. I want to have college courses teach Ear Hustle, dissect Ear Hustle and make somebody do a thesis.”

“We didn’t know how to do this when we started; we learned as we went along,” Poor said. “And we need all three of us to make this happen.”

“It’s not about repeating anything,” Williams said. “What we wanted to do was start something, start a dialogue and spark change. It’s about opening a lane for other things to happen. It’s about creating a space and a time where change needs to exist in everybody’s mind. If next season is successful or not, I think we will be OK. We’re still human; life goes on after the judge slams the gavel.”